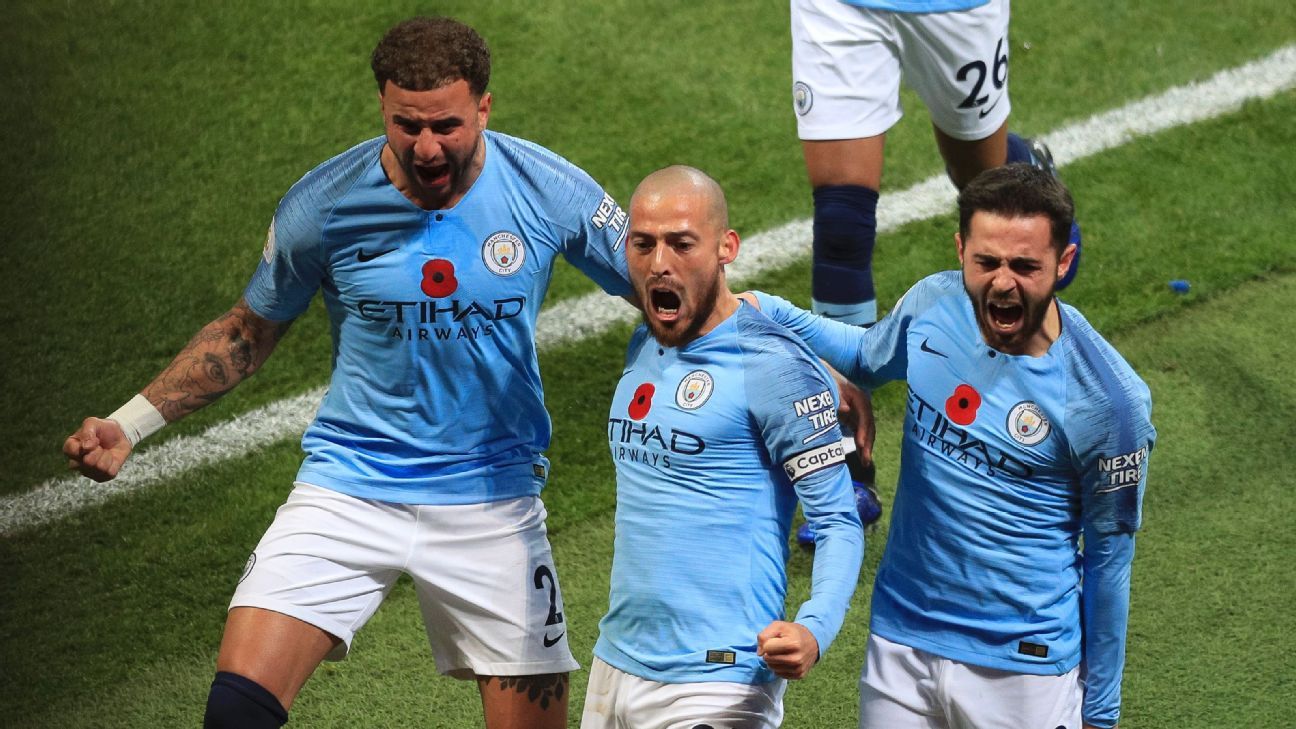 
“Never look at the table until November” has been the mantra of many a manager through the years. Well, it is November … a time when some clubs start dreaming and others are getting twitchy about their manager.

So it’s time, perhaps, to reflect on the first third of the season around the Premier League from the top of the table reading down.

1. Manchester City: Look better than ever and could match last season’s 100 points. Frightening that they are playing like this without Kevin De Bruyne.

2. Liverpool: Not as flamboyant as last year, but arguably more effective. Still unbeaten and in the race, while a year ago they were already 12 points adrift.

3. Chelsea: Free-flowing, with an easy-on-the-eye style under new manager Maurizio Sarri. May be too reliant on Eden Hazard staying in top form.

4. Tottenham Hotspur: Boasting the best away record in the league, they have become adept at winning ugly. Showing admirable tenacity to stay in touch.

5. Arsenal: Unai Emery has been an instant hit with fans. Look likely to score goals galore though the suspicion remains that their defending is not at the same level.

6. Bournemouth: For his next miracle, could Eddie Howe take his extremely watchable team into Europe? David Brooks has given the attack a new dimension and Callum Wilson deserved his England call-up.

8. Manchester United: Already out of the title race, Jose Mourinho’s team often look like football dinosaurs. The display in the derby loss at City showed how far they have fallen.

9. Everton: Going the right way under Marco Silva and playing the sort of football demanded by the Goodison fans. Richarlison has quickly become the headline act.

10. Leicester City: We can all sympathise with the emotional strain and sense of trauma this club has experienced. But the team is too good to slip into trouble.

11. Wolves: Their displays against Manchester City and Arsenal symbolise a technically gifted and ambitious team. One of the best promoted clubs ever.

12. Brighton: The ageless Glenn Murray keeps scoring while Lewis Dunk and Shane Duffy keep it tight at the other end. Hard to beat at home, too.

13. West Ham: Looked good against Manchester United, but they are an erratic, fitful team who so far play only in cameos. Declan Rice is a young star, though.

14. Newcastle: Two wins on the bounce have lifted the Toon mood. Rafa Benitez can keep them afloat, but it will be hard work.

15. Burnley: A July start in Europa League qualifiers messed up their preseason and it has showed. Lost last year’s resilience and look vulnerable.

16. Crystal Palace: Yet to score a home goal in open play — a shocking statistic. They are not a bad side, but that lack of firepower spells trouble.

17. Southampton: One win in 12 games and only eight goals scored says it all. Hard-luck stories are wearing thin.

18. Cardiff City: Neil Warnock’s team have found a couple of wins to rescue a seemingly hopeless cause. Would do cartwheels if they finished 17th.

19. Huddersfield: Have played a bit better than bare form might suggest. But a pitiful six goals so far makes them relegation favourites.

20. Fulham: Sad that manager Slavisa Jokanovic is gone only six months after promotion, but a leaking defence and some bad signings cost him. Claudio Ranieri will need that magic touch he showed at Leicester, but does he have the players?