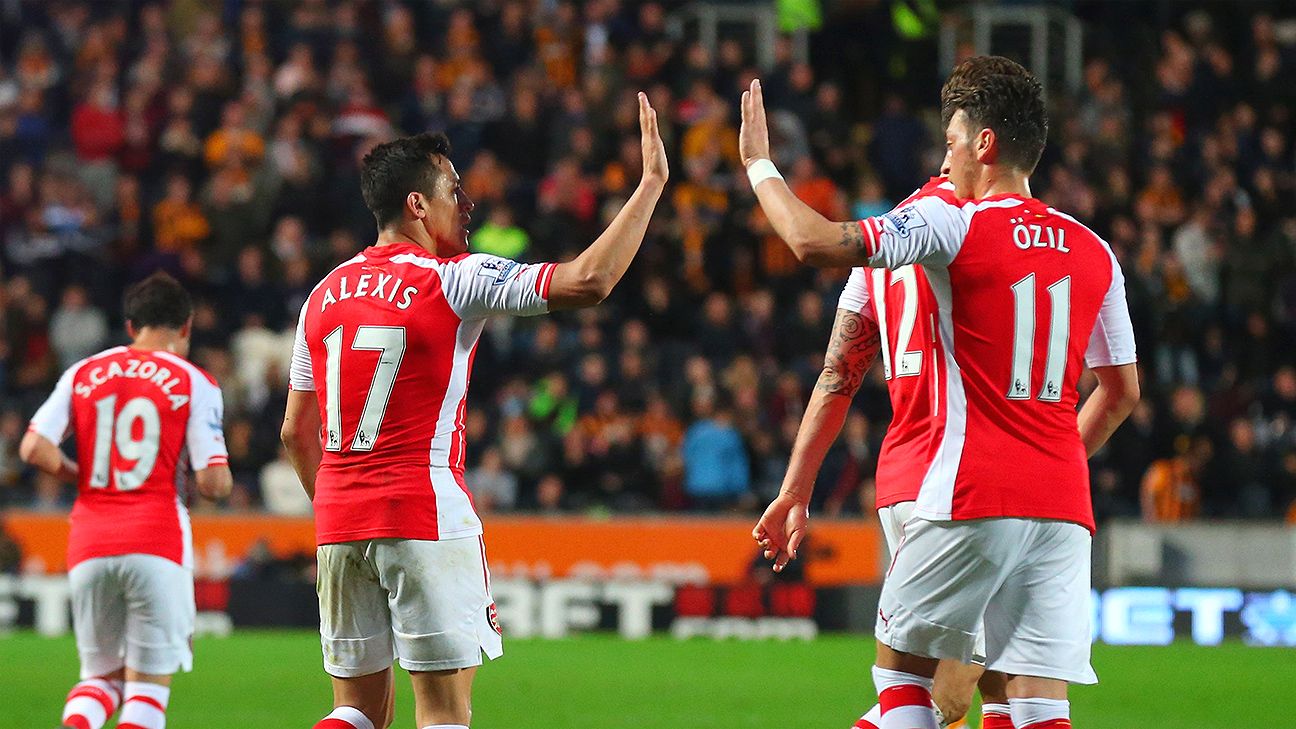 
ESPN FC’s club correspondents were given the task of picking their team’s XI, including potential transfer targets, for when the season kicks off.

CHELSEA: Champions go all out

Tiemoue Bakayoko is in line to be Chelsea’s first signing of a busy summer, and Antonio Conte’s plan has long been to pair him with N’Golo Kante in central midfield. Alex Sandro represents a clear upgrade on Marcos Alonso at left wing-back and should arrive at Stamford Bridge as the world’s most expensive defender.

Romelu Lukaku will not be cheap either, but he is Chelsea’s first-choice to replace the unsettled Diego Costa and will likely be flanked by Willian and Pedro Rodriguez in the opening weeks of the new season as Eden Hazard completes his lengthy recovery from a broken ankle. — Liam Twomey.

Arsenal’s XI for the opening game of the season is hard to predict as the club’s relative inactivity so far has left a number of question marks hanging in the air. Will Alexis Sanchez and Mesut Ozil still be there? Will Kylian Mbappe arrive in a dream transfer? If so, will there be a clear-out to make some of that money back?

This particular prediction has some good news and bad news for Gunners fans. The good news is that Ozil and Sanchez are in it, the bad news is that Mbappe isn’t. But Arsenal have still landed a top striker in Alexandre Lacazette, joining Sead Kolasinac as the only newcomers. There is no Hector Bellerin in this team, but that’s because of Arsene Wenger sticking to a back-three formation (with Alex Oxlade-Chamberlain preferred) rather than a move to Barcelona. — Mattias Karen

LIVERPOOL: Just the one change

There’s only one change from Liverpool’s usual starting XI last season. However, as Jurgen Klopp hinted, Philippe Coutinho looks set to take a more central-midfield role this term, making the most of the Brazilian’s creativity and vision from deep. Mohamed Salah is the only newcomer to the side, but adds much-needed pace to the team, relieving the burden on Sadio Mane. Virgil van Dijk was a top centre-back target for Liverpool but, as a result of tapping-up allegations, any deal for the Netherlands international would be more likely to happen towards the end of the August. — Glenn Price

Manchester City have so many strong attacking options that it will be a difficult task for Pep Guardiola to squeeze them all into his starting line-up. He is likely to go with four at the back, if as expected he bring in four new full-backs, but he will possibly want new signings Dani Alves and Benjamin Mendy to play as extra wingers in the opening game against Brighton.

After signing for £34.7m, Ederson Moraes should get the nod in goal ahead of Claudio Bravo, while the rivalry between Gabriel Jesus and Sergio Aguero is set to intensify. The Brazilian probably has the edge as first choice at the moment but it could get even more competitive if Alexis Sanchez signs, although this deal could drag on later into the transfer window. — Jonathan Smith

Jose Mourinho has already signed Victor Lindelof from Benfica and there is hope that both Alvaro Morata and Nemanja Matic could be in place before the preseason tour of the United States kicks off on July 9.

Ideally, Mourinho would like a hard-working winger as well, but progress over the likes of Ivan Perisic and Willian has been slow-going. With Luke Shaw and Marcos Rojo injured, and doubts about Matteo Darmian’s long-term future, Daley Blind could get the nod at left-back at the start of the season. Mourinho has shown an interest in Jordi Alba but it looks like he is staying at Barcelona. — Rob Dawson

TOTTENHAM: Nothing different at all

Tottenham will buy players to challenge for first-team spots this summer but strengthening the squad options is the priority, so there’s every chance the team that won 12 of the last 13 games last season will continue at Newcastle on the opening day.

Kyle Walker could still be a Spurs player or they could have signed a replacement like Porto’s Ricardo Pereira but Kieran Trippier is still likely to be given the chance to make the right-back spot his own, and Mousa Dembele’s fitness struggles could see Harry Winks start the season in midfield. Any new attackers — Ross Barkley, Max Meyer and Wilfried Zaha are all targets — would probably have to wait for an off-game from Son Heung-Min, who is the only player in Spurs’ front four whose place is anything like vulnerable, before a league start. If Newcastle stick with two strikers in the Premier League, Mauricio Pochettino could opt for three centre-backs with Eric Dier coming in. — Dan Kilpatrick.

BARCELONA: We can all dream…

This is what Barcelona’s team would look like if they manage to sign their top targets this summer — although it’s proving far from easy to land Bellerin and Verratti.

Arsenal and Paris Saint-Germain’s reluctance to sell means Barca will need the players themselves to dig in and force moves. A wide player is also likely to arrive, but may not find a place in the starting lineup immediately. — Sam Marsden.

Cristiano Ronaldo’s extended summer due to Portugal’s Confederations Cup campaign, plus the fallout from his issues with the Spanish tax authorities, mean the Real Madrid talisman is likely to miss the European Super Cup meeting with Manchester United. Assuming, that is, Ronaldo is not lining up against Madrid on Aug. 8 having re-joined the Old Trafford outfit this summer.

That game in Skopje could also see 18-year-old Monaco striker Kylian Mbappe make his Madrid debut, if Blancos president Florentino Perez gets his way, regardless of what happens with Ronaldo. Elsewhere, transfer business is more likely to affect the bench, where newly promoted youngsters Marcos Llorente and Jesus Vallejo can take spots vacated by the departing James Rodriguez and Pepe. — Dermot Corrigan

New signings Niklas Sule and Sebastian Rudy have been busy starring in the Confederations Cup, as well as Chile midfielder Arturo Vidal, but there’s absolutely no need to rush anybody back into the Bundesliga fray for the opening game in August.

Summer signing Corentin Tolisso gets an early chance to impress in midfield after the retirement of Xabi Alonso and the probable absence of Vidal, while solid and reliable Rafinha is preferred to Joshua Kimmich as the German gets a breather after the Confed action. Kimmich, Philipp Lahm’s heir apparent, can wait a little longer to take over at right-back.

Javi Martinez is still recovering from a broken collarbone, so Germany’s World Cup partnership of Hummels and Boateng can shore up central defence having enjoyed a rare summer off. Fellow World Cup winners Neuer and Muller also return refreshed, alongside evergreen wing duo “Robbery” — fitness permitting. And there’s no Alexis Sanchez to be seen, because it won’t happen — Mark Lovell.

PSG: An addition from Monaco

With the obvious exception of Fabinho, who is looking more likely to choose PSG over the likes of Manchester United, Les Parisiens‘ starting XI against Amiens will probably not look too different from last season. That said, Thomas Meunier, Layvin Kurzawa and Javier Pastore at full fitness will make an immediate difference.

Many of this starting XI surrendered the Ligue 1 title to Monaco and flopped in the Champions League last campaign but that does not mean Unai Emery’s squad will not boast new blood by early August. Fully expect Pepe to be part of the Spanish tactician’s group but still working his way back to match fitness along with Kevin Trapp and Julian Draxler after their Confederations Cup exploits.

A new left-back and another attacker may also be among the substitutes at Parc des Princes when Ligue 1 gets underway. Sporting director Antero Henrique is likely to be a very busy man in August, so expect to see greater personnel changes and perhaps even a new formation from September onwards. As for absentees such as Blaise Matuidi, Lucas Moura and Serge Aurier, do not expect to be hearing much more about them as PSG players past this summer. — Jonathan Johnson.