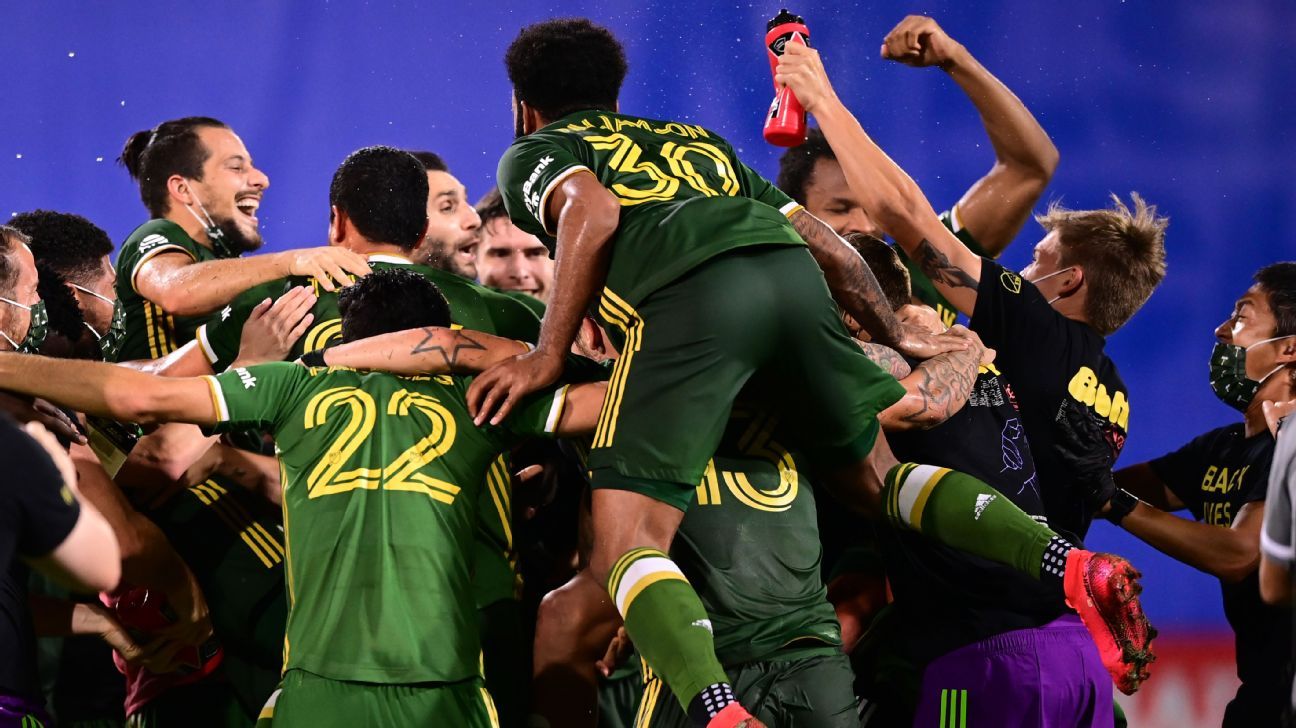 
Diego Valeri raised the MLS is Back Tournament trophy, an expression on his face that seemed both maniacal and gleeful. He was soon joined by his teammates, jumping and shouting in unison, with masks that read “Champions” mostly staying on. Off to the side, Portland Timbers owner Merritt Paulson engaged in a stream of fist pumps and claps.

It all took place in a stadium devoid of the fans and festivities that usually accompany such a moment.

It was a surreal moment that capped off a surreal tournament. A month ago, there were questions about whether MLS is Back would get off the ground, as a wave of positive COVID-19 tests forced the withdrawal of FC Dallas and Nashville SC. Yet the tournament survived, at times thrived, and the positive tests abated. The games featured the kind of chaos that is the very oxygen of the league, and the Timbers emerged as deserving 2-1 winners, capitalizing on their chances while subduing a game Orlando City side whose performance in the final, though heavy in possession, never hit the heights it reached earlier in the tournament.

— Stream FC Daily on ESPN+
— How FCD and Nashville prepared for the rest of the 2020 season
— MLS regular season: What we know and what we don’t

The two teams spent about a month-and-a-half in a bubble that might have been palatial in some ways but was no less isolating. The time spent away from families and loved ones required a special kind of endurance. For that reason, it was easy to appreciate Portland’s delight and Orlando’s disappointment.

Normally, the crowning of a tournament champion would be a time for reflection for the league and its teams. Yet as the past five months have driven home, these are far from normal times. The elaborately constructed bubble MLS created will be torn down, and the league is giving itself a whopping 22 hours’ respite before the regular season resumes. That will occur with a match between Dallas and Nashville — in front of fans, no less — a decision that borders on folly, given the state of the pandemic in Texas.

Portland and Orlando will have a while longer to digest what has taken place. As ESPN play-by-play man Jon Champion so eloquently put it, winning MLS is Back “doesn’t suggest greatness in itself, but it does point to a team that has been best able to cope with the unique circumstances.”

To be clear, there is value in that. That is especially true of an Orlando team that in the first five years of its existence managed to win only a handful or two of regular-season games as well as a few coin flips. The playoffs remained well out of reach. In this tournament, Oscar Pareja revealed — not for the first time — his managerial chops in turning a team around and that the Lions are indeed a talented and cohesive outfit that can expect brighter days ahead. At minimum, a foundation has been laid.

Portland’s pedigree is a bit greater, having claimed one MLS Cup title and reached the final on another occasion. The fact that the Timbers prevailed in Florida’s insufferable summer weather is no small feat, and now the players have a spot in next year’s CONCACAF Champions League and $300,000 in prize money to share.

Now a different set of challenges awaits, which is why there is a danger in reading too much into the results of MLS is Back. The cadence of home and road games and the travel will resume. For all of Orlando’s improvement, this team has yet to win a match outside the 407 area code this season. Yes, some of that is down to circumstances of hosting MLS is Back, but road results will reveal even more about Pareja’s side.

Portland’s challenges are influenced by geography as well, though in a different way. The first phase of the restarted regular season will see it play primarily in the Pacific time zone against the LA Galaxy, LAFC, the San Jose Earthquakes and reigning MLS Cup champions the Seattle Sounders, as well as Real Salt Lake. That seems decidedly more difficult than what some other teams are coping with, though how the rest of the regular season schedule will shake out is still unknown.

Another challenge will be achieving consistency over an extended period. Weaknesses get exposed over the long slog of a regular season. In Orlando’s case, one might have been revealed in the final. That’s the difficulty in defending set pieces, which was the source of both Portland goals. The regular season also requires endurance different from that required in the bubble.

As for MLS is Back, there has been some talk that Portland’s trophy should come with an asterisk, given the circumstances that surrounded it. Certainly a strong argument can be made due to the fact that two teams were unable to take part. Yet cup competitions — with their random draws and penalty shootouts — are designed to accentuate the sport’s eccentricities and randomness. This tournament was no different.

At this stage, it’s difficult to determine where MLS is Back will rank in terms of importance. Will it go the way of the SuperLiga or be hailed on a grander scale? More will be known in time.

But for the Timbers, the champagne that will flow from the MLS is Back trophy will taste plenty sweet.