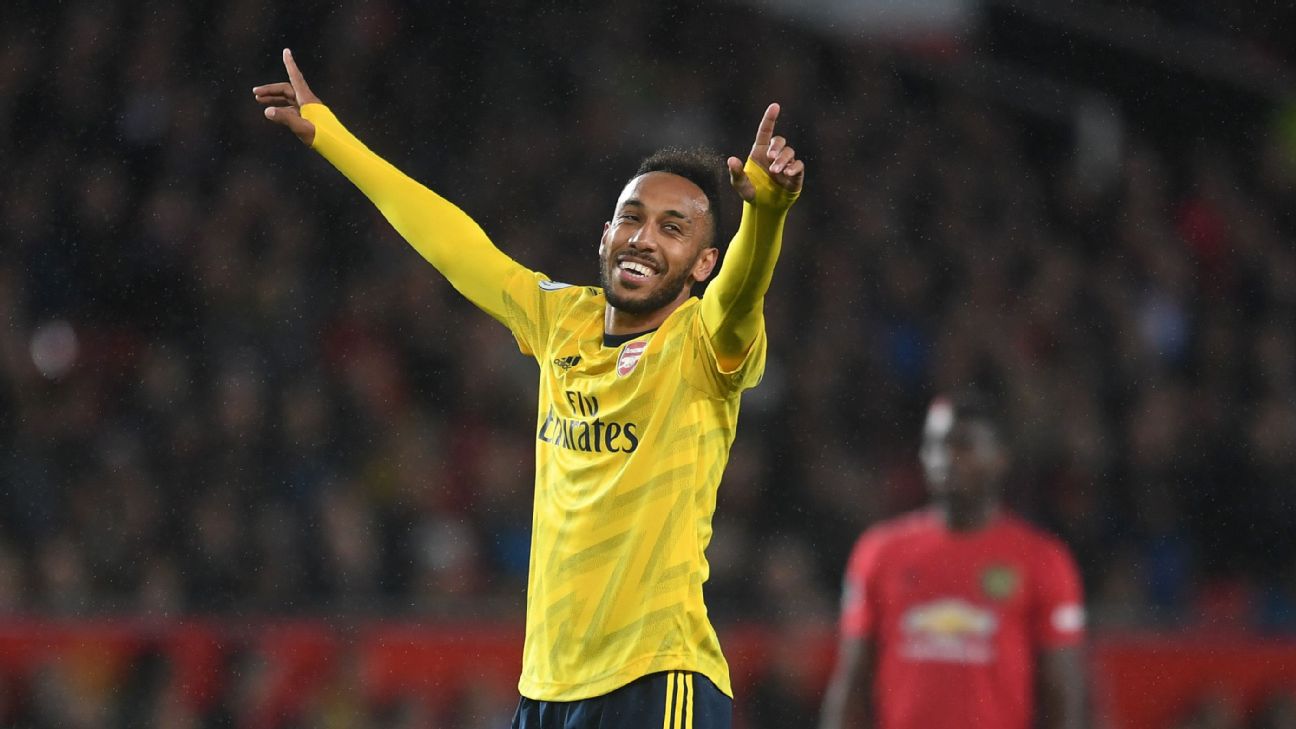 
Arsenal recovered from going a goal down to secure a 1-1 draw against Manchester United on Monday, but their 13-year wait for a Premier League win at Old Trafford continues following a match that was short on quality.

The Gunners looked much more secure defensively, with Sokratis Papastathopoulos and David Luiz largely untroubled, and it was another impressive showing from youngster Bukayo Saka, who looked a real danger out wide.

Unai Emery’s side will feel they had enough openings to win the game, but unfortunately for them, they lack a real cutting edge outside of Pierre-Emerick Aubameyang.

6 — Emery’s defensive work on the training field paid off with a solid display, but the Spaniard will be tempted to change things up in midfield as they continue to lack creativity at the heart of the pitch.

GK Bernd Leno, 6 — Dealt smartly with a decent strike by Andreas Pereira as the first half reached the midway point, but could only watch as Scott McTominay’s stunning strike sailed into the top corner for 1-0. A great one-handed save denied Harry Maguire a superb winner in the second half, and the German palmed away Marcus Rashford’s late free kick.

DF Calum Chambers, 7 — Given a yellow card for a foul in the opening 10 minutes and the former Southampton man looked set for a tough evening against the slippery Daniel James, but he recovered superbly and was untroubled for the remainder. Provided a solid option on the overlap when Nicolas Pepe drifted centrally.

DF Sokratis Papastathopoulos, 6 — A much better showing from the Greece international. Made life difficult for Rashford during a swift United getaway in the first half, in what was a much more authoritative display than in recent weeks.

DF David Luiz, 6 — The Brazilian will be a relieved man after McTominay failed to punish the centre-back’s poor positioning at a United corner as the midfielder headed over with the goal at his mercy in the second half.

DF Sead Kolasinac, 6 — Didn’t venture forward as much as in previous weeks as Bukayo Saka held his position wide on the left. Had a couple of difficult moments defensively as United looked to counter, and got away with a clumsy handball in his own penalty area.

MF Lucas Torreira, 5 — The Uruguayan doesn’t have the cutting edge required to be a success in a more advanced midfield role than he’s used to, summed up by a miscued volley in the United penalty area early in the second half. Brought off for Dani Ceballos after 54 minutes as Arsenal looked for a creative spark.

MF Granit Xhaka, 5 — Criminal defending from the Arsenal skipper as he ducked his head out of the way of McTominay’s strike for the opener. The Swiss international needs to be more positive on the ball, with most of his distribution being more sideways than forward. Booked for chopping down Mason Greenwood after 75 minutes.

MF Matteo Guendouzi, 7 — The Frenchman moved the ball well and forced David De Gea into a save on the angle in the first half, and the 20-year-old was his side’s most progressive midfielder on the ball at Old Trafford as he looked to drive his side forward.

FW Bukayo Saka, 7 — Worked space well to set up Pepe for Arsenal’s best first-half opening, and showed some great flashes of skill on Arsenal’s left, but should have done much better with a gilt-edged chance on the hour mark as he fired over, but provided the pass for Arsenal’s equaliser. A promising display came to a close when he was replaced by Joe Willock after 79 minutes.

FW Nicolas Pepe, 5 — The Ivorian is yet to set the Premier League alight since his record move from Lille, and the winger still looks undercooked in an Arsenal shirt. Not quite time for Arsenal fans to panic, but the 24-year-old is clearly struggling, and was hauled off for Reiss Nelson in the 74th minute.

FW Pierre-Emerick Aubameyang, 7 — Came to Arsenal’s rescue yet again with a lovely clipped finish after exploiting a lopsided United defensive line, in what was the Gabon international’s only real opportunity.

MF Dani Ceballos, 6 — Got on the ball but failed to create a meaningful opportunity.

FW Reiss Nelson, N/R — Failed to make an impact offensively and was forced into defensive work on Arsenal’s right.