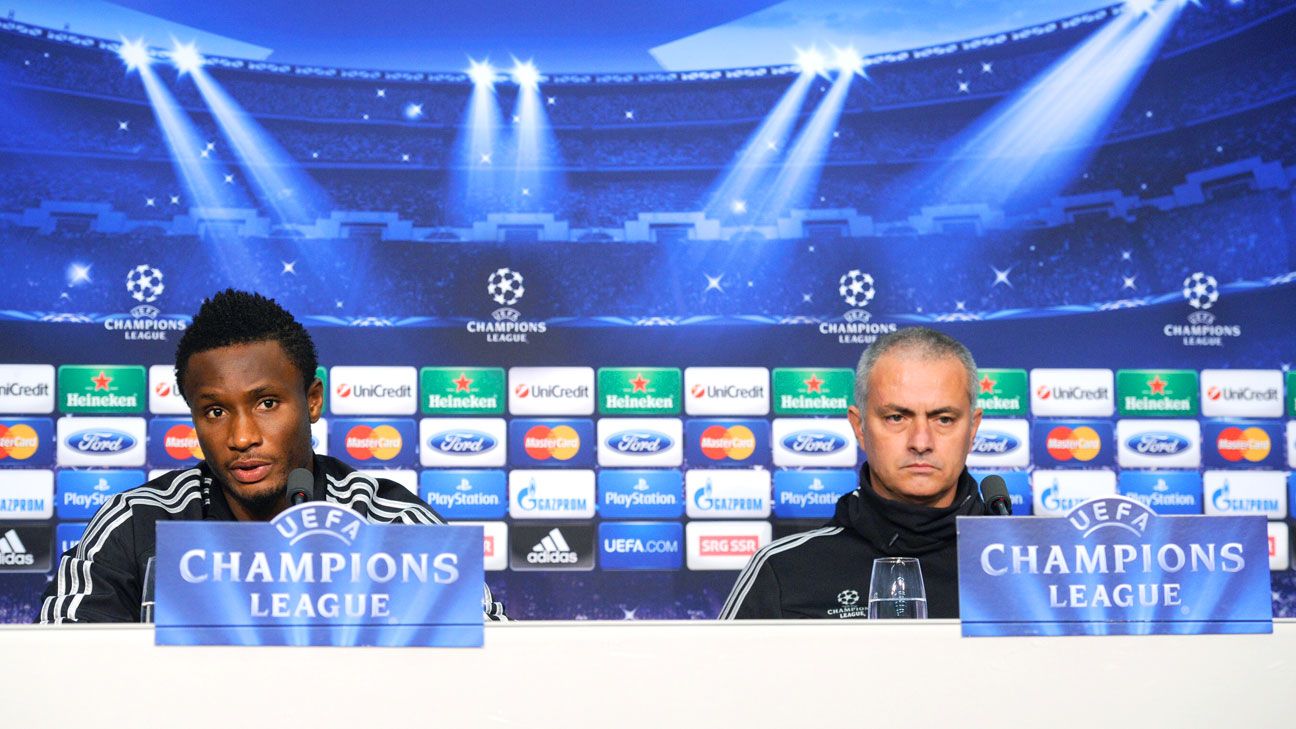 Manchester United coach Jose Mourinho had two spells at Chelsea, and enjoyed the services of a swathe of African stars.

Ahead of his meeting with his former club on Sunday, KweséESPN had a go at picking The Special One’s All-African Chelsea Dream XI.

Goalkeeper: Yves Makabu-Ma-Kalambay – There was only one contender for the goalkeeping spot in this dream team, with Belgian-born Democratic Republic of Congo stopper Ma-Kalambay the only option.

He moved to Chelsea as a youngster in 2003 and was involved in the senior side under Mourinho in 2006-07 without making a league appearance. He was once on the bench for a Champions League game, and is currently with Wycombe Wanderers.

Left-back: Celestine Babayaro – Left-back was a tough pick, with Babayaro just edging in ahead of Ghana’s Abdul Rahman Baba. Neither man enjoyed great success under Mourinho, although the Nigerian did establish himself as a fan favourite at Stamford Bridge before the Portuguese coach’s arrival.

He won the Cup Winners’ Cup and the Super Cup in 1998, and would become an FA Cup winner two years later.

Centre-back: Papy Djilobodji – There haven’t been too many African centre-backs to have been employed by Mourinho, with United’s Eric Bailly a notable exceptional.

Senegal’s Djilobodji was one exception, although signed as a short-term solution from Nantes in 2015, he wasn’t used, and moved to Werder Bremen on loan in 2016 before signing permanently with Sunderland.

Centre-back: Geremi Njitap is best known for his work as a central midfielder or as a right-back, but this versatile operator also featured in the heart of the defence at times during his career, and makes our Dream Team in this position – ahead of Kenneth Omeruo.

He was part of Cameroon’s Golden Generation at the turn of the century, and also won two Champions League titles with Real Madrid.

Right-back: Victor Moses never truly got the rub of the green under Mourinho at Chelsea, with the Portuguese coach opting to loan out the wideman despite some fine displays during pre-season.

He’s since reinvented himself as a right wing-back under Antonio Conte, and was a key figure during the Pensioners’ title-winning campaign last term following a remarkable change in fortunes.

Centre-midfield: Michael Essien – The Bison enjoys a close relationship with Mourinho, who he refers to as ‘Daddy’, with the two men working together both at Chelsea and at Real.

Injuries may have dimmed Essien’s impact, but after arriving in West London, he established himself as one of the most effective central midfielders in world football.

He was a key figure in Chelsea’s Premier League success under Mourinho in 2006.

Centre-midfield: John Obi Mikel was reconverted into a more defensive midfielder by Mourinho, despite beginning his career as a playmaker.

While some Nigeria fans may regret never seeing the Super Eagles star realise his true potential, he’s still enjoyed a trophy-laden career at the top of the game.

There aren’t too many African players who can match Mikel’s longevity at a major club, and he won two Premier League titles, the Champions League, and a host of other honours with the Blues.

Winger: Mohamed Salah – Arguably the outstanding player in the Premier League this season, Salah is one of a handful of exquisite talents who never reached their potential under Mourinho.

Signed from Basel in 2014, he made just 13 league appearances for the Londoners before moving on loan to Fiorentina and then AS Roma.

Liverpool fans will be glad that he was so significantly overlooked at Chelsea.

Winger: Salomon Kalou – On the other flank we’re plumping for Kalou in this Dream Team, meaning that the likes of Bertrand Traore, Gael Kakuta and Christian Atsu would have to content themselves with a place on the bench.

The Ivorian was an underrated presence at Chelsea, regularly making decisive contributions off the bench before departing for LOSC Lille in 2012 with a Champions League-winner’s medal.

Forward: Didier Drogba – One of the greatest signings Mourinho ever made, Drogba was brought in from Olympique de Marseille in 2004 for £24 million, and while his return in his maiden campaign didn’t set pulses racing, he made up for it in the seasons to come.

The forward amassed a swathe of honours with the Blues, settling the Champions League final in 2012 and a host of FA Cup finals with a series of decisive interventions.

Notably, Drogba hit 33 goals – including 20 in the Premier League – during the 2006-07 campaign, and also won his first African Footballer of the Year award.

Forward: Samuel Eto’o – Based purely on their respective spells at Chelsea, a case could be made that Demba Ba enjoys a spot in this side ahead of Eto’o.

However, the latter still made an impression in West London – netting a hat-trick in a memorable 3-1 victory over Manchester United – and finished his sole season at the club with an admirable nine goals in 21.

On a broader career perspective, Eto’o clearly deserves his spot in this and any other African Dream Team. None of the continent’s stars can match his three Champions League wins or his four African Player of the Year awards.