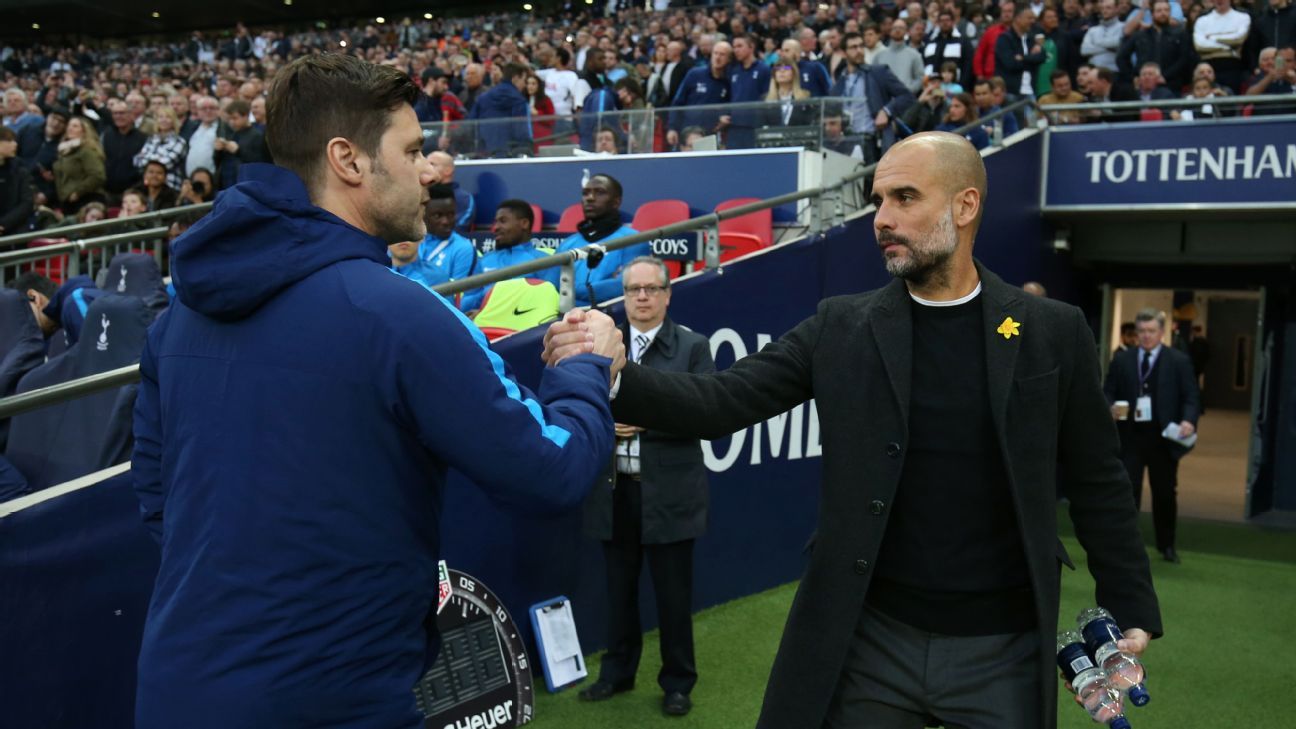 
“One of the absolute best,” enthused Pep Guardiola this week. He was not talking about a member of Manchester City’s record-breaking side, nor a prospective signing designed to strengthen them even further, but a fellow manager. Potentially a rival manager next season, if Maurizio Sarri takes over at Chelsea.

Guardiola was not merely being polite. His admiration for Sarri and the Italian’s style of play is reflected in City’s interest in Napoli midfielder Jorginho. It is part of a trend. Because when Guardiola buys players, they often tend to have been coached by his favourite managers. If some people collect autographs or selfies with their heroes, Guardiola accumulates squads populated by their former charges. He can seem part-fan, part-director of an Ivy League university, looking for recruits schooled at others.

Consider those he has already brought in. He confirmed in an interview two weeks ago what was already apparent: that the two Premier League sides he most enjoys watching are Tottenham and Liverpool. In turn, that reflects his respect for Mauricio Pochettino and Jurgen Klopp.

Last summer, Kyle Walker joined City from Spurs. The previous year, Guardiola brought in Ilkay Gundogan, a stalwart of Klopp’s Borussia Dortmund team. Two more of them, Mario Gotze and Robert Lewandowski, joined Guardiola’s Bayern Munich, even if the Bavarian club had a considerable input in both deals.

And yet, they may not be the definitive Guardiola signing. That, even if his City career has been inconclusive, is Aymeric Laporte, a player whose football education came courtesy of both Ernesto Valverde — judged sufficiently similar to Guardiola in ethos that Barcelona appointed him — and Marcelo Bielsa.

“The best coach in the world,” Guardiola said last year in praise of Bielsa. Two of the Argentinian’s former Chile charges, Claudio Bravo and Alexis Sanchez, whom Guardiola signed for Barcelona, are also among his buys. Tellingly, Bielsa was Pochettino’s great inspiration.

Even before City were eliminated by Monaco in last season’s Champions League, Guardiola was effusive about Leonardo Jardim’s tactics; he then brought in Bernardo Silva and Benjamin Mendy. Even when players come in from clubs who scarcely ape Guardiola’s brand of football, there are common denominators. John Stones came from Everton, playing for Guardiola’s former Barcelona teammate and roommate Ronald Koeman; perhaps more pertinently, his previous manager, Roberto Martinez, was described as the brother Jordi Cruyff never had by his late father, Johan, Guardiola’s great mentor. Cruyff senior was a fan of Martinez the manager.

Perhaps it suggests the elite level of football is a small world. Yet accusations of nepotism should be put into context. A policy seems underpinned by logic. Pochettino believes that the more distinct a style of play, the harder it can be to sign players who suit it. There are fewer qualified candidates. Guardiola’s style of play is more distinct than most, his demands more challenging. It makes sense to bring in those already accustomed to at least some of his thoughts. In some cases, he has tried to rehire those exposed to all of them, taking Thiago Alcantara to Bayern and attempting reunions with Sanchez and Dani Alves in Manchester.

But the groundwork has been laid for those who are newcomers to Guardiola’s regime. Certainly the Catalan is an evangelist for the pressing game; so are Klopp, Pochettino and Sarri. A purist gravitates toward like-minded thinkers and away from the pragmatists. He has prospered with some players who have operated in a contrasting ethos for cautious counter-attackers — Xabi Alonso, formerly employed by Rafa Benitez and Jose Mourinho and terrific for Guardiola’s Bayern — but there are also warnings from the past.

There are many reasons why Zlatan Ibrahimovic and Guardiola were a mismatch at Barcelona, but it scarcely helped that his three previous managers were Mourinho, Roberto Mancini and Fabio Capello, none exactly a soulmate of the Catalan’s. And, excellent as Alonso was, his finest Mourinho alumnus may be one the Portuguese barely picked: Kevin De Bruyne, who was largely untouched by Mourinho’s influence. Perhaps it helps that Guardiola does not have to coach the pragmatism out of players.

Guardiola is the most successful of paradoxes: a serial winner focuses on the process, not the outcome.

It explains why he does not always sign proven winners — Stones and Walker joined City with no major trophies to their names; Jorginho has just one — but about a commonality of ideas.

Not everyone comes from within his small world; Ederson and Gabriel Jesus are outsiders but with similar emphases on passing and pressing to their respective games. Leroy Sane seemed to represent an old-fashioned case of scouting, when Guardiola witnessed his promise in the Bundesliga.

His recruitment strategy is not fail-safe, as Bravo and Nolito prove (but then, whose is?), but it does reduce the risk and ought to shorten the time to adjust. And his signings can complete a footballing family tree, often tracing back to either Johan Cruyff, Bielsa or Arrigo Sacchi, whose influence filtered down to Klopp via the former Mainz manager Wolfgang Frank.

It is a way Guardiola pays tribute to his managerial inspirations, and a way he looks to keep their ideas alive. It is an intellectual exercise conducted with a fan’s enthusiasm, and it seems a recruitment strategy.