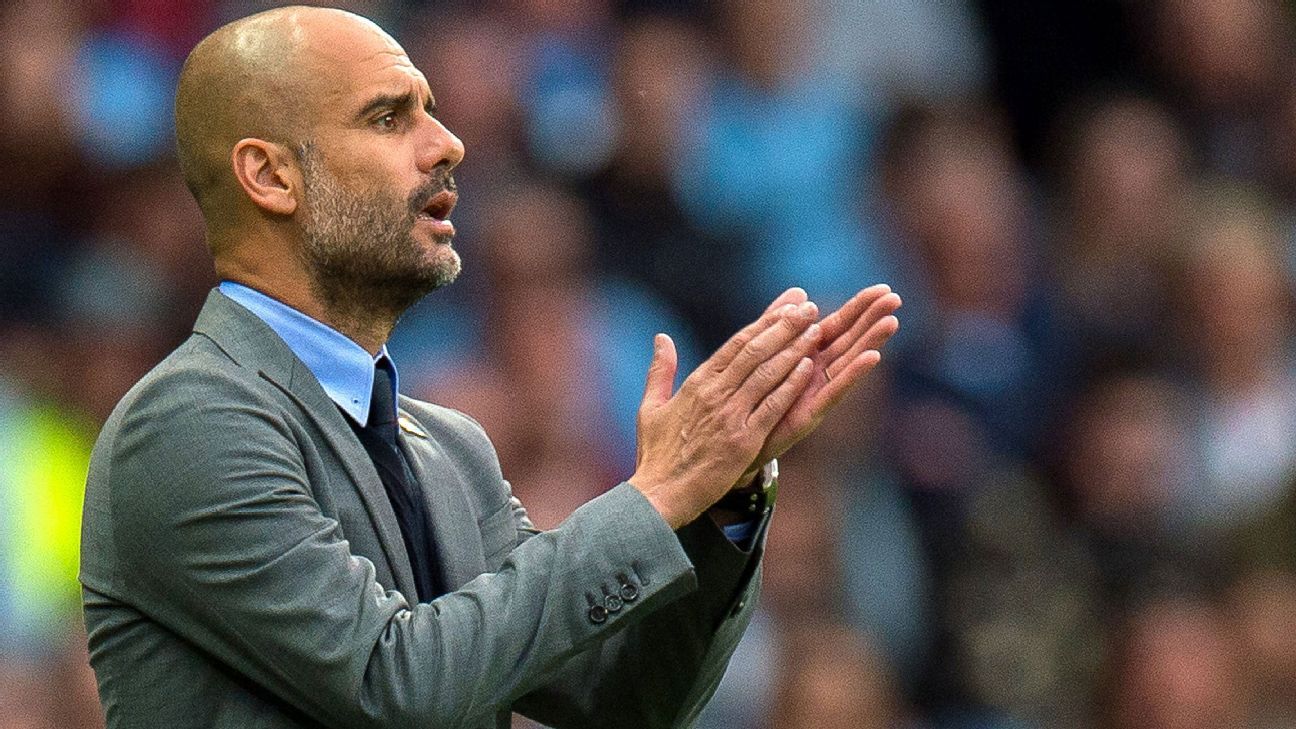 
When Pep Guardiola arrived at Manchester City in July 2016, the club made a fuss of the unveiling of their superstar manager by staging a “Cityzens Weekend,” at which the slogan “It Begins” was projected from anything and everything bearing a club badge.

Guardiola was not entirely comfortable with the idea. After all, having coached at Barcelona and Bayern Munich, where gimmicks were not required, this felt a little too much about the manager rather than the team. Meanwhile, the catchphrase seemed odd, given the club was in the midst of its most successful period, having won five major trophies in four years prior to Guardiola’s arrival.

Still, the narrative was clear. Guardiola, arguably the most sought-after coach in world football, was their guy and he was going to take a newly-successful club onto an entirely different level. No more would City judge themselves against domestic rivals; instead they would measure their success against Barcelona, Bayern and Real Madrid and not only was Guardiola going to take them there, but he would do it in style.

“It Begins” was all about City entering football’s platinum elite, yet there was a hitch: Chelsea also appointed a pretty decent coach in Antonio Conte, while Mauricio Pochettino was developing an exciting young team at Tottenham, Jurgen Klopp was revitalising Liverpool and Jose Mourinho was back in town – literally — having been appointed as manager at Manchester United.

And so, by the end of year one, Guardiola had registered his first season in management without a trophy. Elsewhere, Conte had guided Chelsea to the Premier League title and Mourinho delivered the EFL Cup and Europa League trophies to Old Trafford.

It didn’t really begin at all for City and Guardiola last season, which is why the pressure has increased ahead of 2017-18; a second successive season without a trophy would be unthinkable, not only for City’s hugely ambitious owners, but also for the club’s manager, who boasts a CV that is all about winning.

City’s owners expect to challenge for every trophy and Guardiola is no different. It is why, since he took charge, the club has spent in excess of £400 million on new players: They are simply not prepared to accept second-best.

So how will Guardiola approach this new test of his credentials?

Having insisted throughout last season, particularly when the team was struggling during the winter months, that he would never change his principles, the reality is that Guardiola has modified his approach in an effort to succeed in England.

The attempt to have his team pass themselves to glory, as Barca and Bayern did, has been compromised and the £34m signing of Benfica goalkeeper Ederson is a key part of the new tactical plan.

His formidable kicking ability, both in terms of distance and accuracy, enables City to get the ball forward more quickly. Ederson can get the ball into the opposition penalty box with one long pass, something Guardiola highlighted following the preseason win against Tottenham in Nashville.

Long-ball tactics? Not quite, but it is certainly an Anglicised approach to the game and one that he did not have in mind when he signed Claudio Bravo to replace Joe Hart last summer. Guardiola has identified that, to be successful in the Premier League, teams must be prepared to get the ball forward quickly. They must also have pace and athleticism.

Leicester and Chelsea have both won the last two Premier League titles with this recipe for success and, by adding Ederson and three quick and strong new full-backs in Kyle Walker, Danilo and Benjamin Mendy, Guardiola has made key personnel changes.

Further forward, the signing of Bernardo Silva from Monaco will further sharpen City’s attacking edge, while the ongoing pursuit of Alexis Sanchez points to Guardiola’s determination to have pace, movement and goals throughout his forward line.

But the stakes are high and there are no guarantees that City and Guardiola will succeed. Chelsea and United have strengthened their squads and both will expect to challenge for the title. Tottenham will not fade away, while Liverpool, Arsenal and a resurgent Everton will also ensure that last season’s top seven will fight tooth-and-nail for the top positions.

Such competition could yet end up resembling a vice being squeezed from both sides for Guardiola. His bosses, City’s Abu Dhabi-based hierarchy rather than the Catalan axis of chief executive Ferran Soriano and director of football Txiki Begiristain, will not be quite so understanding and accepting of failure if major silverware is not delivered this season.

The mistakes of last season must be learned from — that preseason tactical shift and move for Ederson suggests they have at least been recognised — if City are to mount a sustained challenge, but Guardiola now knows that he is in a six- or even seven-way fight for the title, rather than the two-horse race he had in Spain or the annual procession he enjoyed with Bayern.

He must beat a strong field of rivals at the same time as keeping his bosses onside because, whatever the public pronouncements may be, City’s owners recruited Guardiola to make the club serial winners, rather than one that trailed in among the also-rans.

And even Guardiola, one of the most successful coaches in world football, will find it uncomfortable next May if he has to explain away another season without a trophy. “It Begins” must have more than a hollow ring this time around.