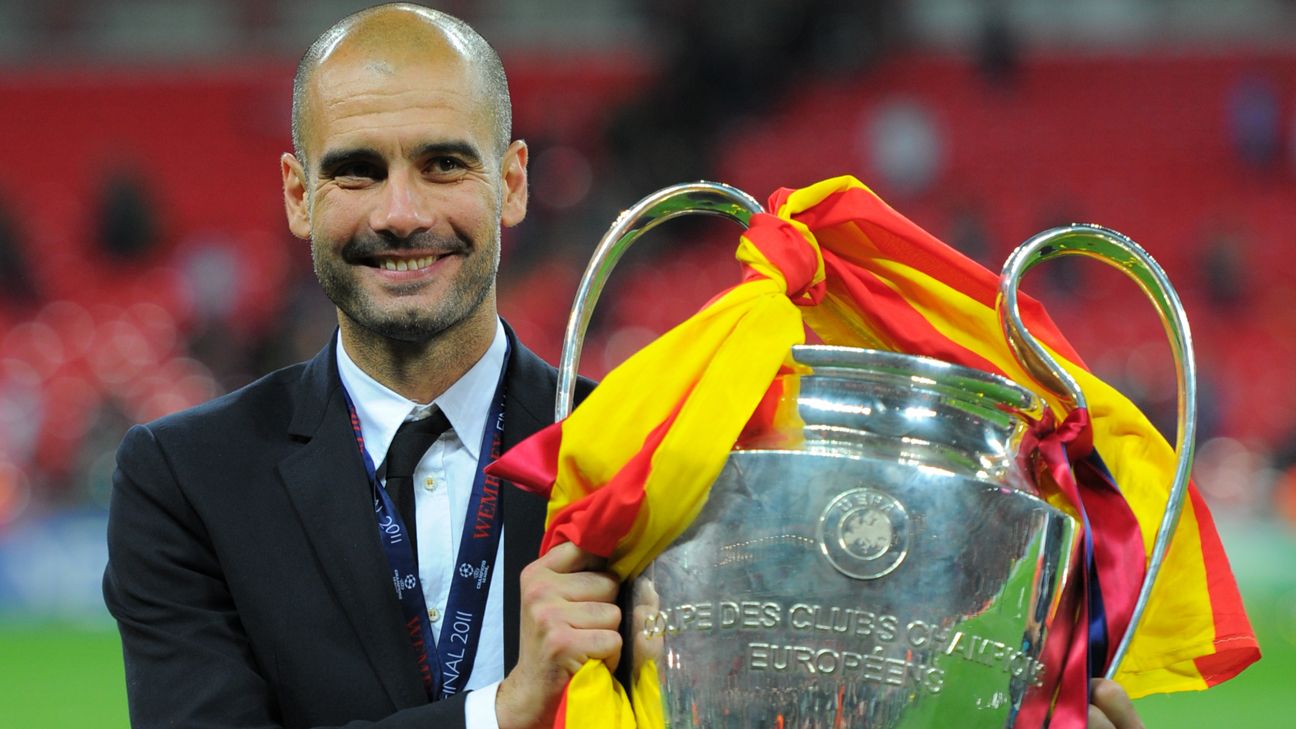 
It’s now exactly nine years since Pep Guardiola last laid hands on the trophy he most cherishes: the Cup With The Big Ears — which the champions of Europe have hoisted to the sky every year since 1956. That was at Wembley, May 28, 2011. And for Manchester City fans, I guess there’s some retrospective schadenfreude that not only was his triumph against the otherwise all-conquering Sir Alex Ferguson’s Manchester United, it was what Fergie called “a hiding.”

Not for Guardiola. In the modern history of football, he’d be one of the most obsessed with the line of thinking that: “Celebrating past glory is a weakness. … Everything hinges on the next game, the next performance, the next trophy.” He also lives with a healthy obsession for winning that competition, be it named the European Cup or the Champions League.

There is, in fact, a cocktail of reasons why he’s suffering from an irritating thorn in his side about not conquering Europe since Pedro, Lionel Messi and David Villa lit up Wembley in one of the all-time great European performances. Pride, ambition, professional self-exhortation — all of those, of course. But Guardiola grew up thinking of the European Cup as a holy grail, something agonisingly out of reach of the Catalan club that he loved, Barcelona, for whom he became a ball boy before emerging as their cerebral midfielder.

Guardiola began to yearn for a trophy that Real Madrid had made a decent attempt at turning into private property and then used, or certainly their fans and media used, to taunt all of those of a Barca persuasion. Well, you would … wouldn’t you?

There’s nothing as intoxicating as that which is lusted after, which carries allure and which you can witness being savoured by others, but feels constantly just out of reach. Universally, everyone can relate to that.

– Stream new episodes of ESPN FC seven days a week on ESPN+
– Stream every episode of 30 for 30: Soccer Stories on ESPN+

Yet what the curiously buoyant number of Guardiola sceptics should realise is that even if it would pain him to turn 50 in January with just three — rather than several more — Champions League winner’s medals, he understood, right from the start, that the European Cup is a fickle, often cruel mistress. Anyone trying to portray the Catalan as someone chasing his tail in ever-decreasing circles, bewildered at why, even with the resources at Bayern Munich and City, he’s not added to the two finals he won in 2009 and 2011 would be going down a blind alley.

From his very first interaction with the European Cup, 34 years ago, until this season, when his courting of the Champions League has been interrupted by the coronavirus pandemic, it’s a story of a trophy doing the dance of the seven veils with him. Tempting, tantalising, very occasionally throwing itself into his arms, but more often remaining hidden away and quixotic.

For relatively recent converts to Spanish football, Barcelona or Guardiola, plus those who are simply a good deal younger than he or I, it might come as a shock to realise that by the time Guardiola turned 15 he’d witnessed his club win La Liga just once. It happened twice during those 15 years, but the first, when he was age 3, hardly counts as influencing him greatly.

It was an era when European Cup qualification depended exclusively on being champion of your country. So the heart-stopping, dramatic and eccentric march to the 1986 final, in that year when Terry Venables was coach and Guardiola a ball boy living 50 metres away from Camp Nou in the original La Masia, captivated him heart and soul.

That was when, just a callow teenager, he first understood that a scintilla of bad luck, dropping your guard for a second, meant this competition would slap you in the face, nick your wallet and blame you for the altercation when the authorities are called. Anyone who thinks he forgot that lesson at any stage in the subsequent decades is misguided.

For example, City’s coach was a Camp Nou ball boy on the famous night when Barcelona, 3-0 down to the “unknowns” of Goteborg in the semifinal, won the home game 3-0 then went through to the final on penalties. Guardiola ran onto the pitch to try to congratulate midfielder Victor Munoz, to gaze adoringly at Venables.

Those nights brand your soul, they reconfigure your ambition.

Spain‘s champions, if you recall, were then bored into a stalemate by the stultifying Steaua Bucharest tactics in one of the two or three worst European Cup finals in history. They failed to convert a single penalty during the shootout. Such experiences scar your mindset, and trauma inspires a lifelong dedication to “putting things right.”

Six years later, Guardiola won the competition in his club’s first return to the summit.

He was still only 21, still only really beginning to ensure that the central midfield pivote position in Johan Cruyff’s Dream Team absolutely belonged to him. Nevertheless, his prematch interview was about showing a winning arrogance, about never allowing a fear of failing to inhibit an outright assault on winning. He knew, even then, before Ronald Koeman’s thunderous winner against Sampdoria, that this trophy is a slippery fish — snatch at it and it’s gone.

Long before he was a professional player, Guardiola had been preparing to do battle with the quixotic, Machiavellian European Cup. He feels now as he did then: Talent, budget and desire are simply insufficient; you need luck, you need grisly amounts of character and belief, and even then this is a test that can lure you in with the promise of a kiss only to knock your teeth out.

Recall the first season he defended this trophy. Barcelona were holders, they had a great coach, a deluxe squad … and they were out by November, having been 2-0 up at home to CSKA Moscow but sunk 2-3 by full-time. It was a monstrous, monstrous embarrassment.

This doesn’t need to be a chronological list of Guardiola’s love-hate affair with the world’s greatest club competition, but without savouring some of the venom and veneration this trophy has brought him, it’s hard to truly understand its place in his psyche.

Take the trouble to watch back Barcelona’s brutal destruction by AC Milan in the 1994 Champions League final, a humiliation that cost Andoni Zubizarreta his Camp Nou future and brought the end for Cruyff, and once you’ve savoured the quality of the Rossoneri finishing, there’s something else that leaps out. There is Guardiola, irritated and increasingly in disbelief as teammate after teammate plays ill-judged, ill-delivered passes that expose the Catalans’ notoriously porous defending. When you add his teammates’ outright technical errors into the mix, you can see the man who is now City manager turning to remonstrate, helpless against a tidal wave of Milanese chutzpah as Fabio Capello’s understrength team routed them.

When he left Barca in 2001, which coach did Guardiola actively seek out in order to learn from? Capello, then at Roma.

Do not, under any circumstances, fail to take in how much these experiences at the summit of European football meant to him, influenced him.

The remainder of his playing career still held all the rough and tumble that informs his managerial approach to the Champions League. Which memory is most brutal? It’s hard to pick.

The 1998-99 season, when Barcelona’s centenary would be celebrated via the final being hosted at Camp Nou? His campaign was ravaged by a brutal injury, which initially was badly diagnosed and led to dark and unfounded rumours about what might be wrong. He was fit to play just once, against Brondby, in a group so tightly contested that if Barcelona had scored just one more goal, either at home or away to Manchester United, they instead of Ferguson’s team would have gone through. There would have been no Treble for the English club, and Guardiola would have perhaps had a shot at winning his yearned-for second European title at the Catalan temple of the Camp Nou. Imagine his agony in watching, helplessly.

Comprehensively thrashed in the semifinal, with Real Madrid waiting in the Paris final, by Valencia in Guardiola’s last Champions League season wearing Barcelona colours (1999-00)? Hammered 3-0 at home by Real Madrid (who else?) in his only Champions League appearance for Roma?

Falling romantically and hopelessly in love with this tournament while still an impressionable teenager has carried an emotional and professional cost from then until now.

His victories? They show other sides of the Janus face.

How, please tell me, could a Barcelona side so stricken, so anaemic the previous season march to Spanish football’s first-ever Treble in 2008-09, during Guardiola’s first season as a senior coach? Throw in the details that Andres Iniesta was 60 percent fit, was ordered by his physio not to shoot at goal or his thigh muscle would ping apart; that Thierry Henry told me, “I don’t know how I played that night”; that Eric Abidal and Dani Alves were suspended; that Yaya Toure played out of position at centre-back; that Ferguson, for the first time in his life, declared that his team “was beaten” after just nine minutes.

All the years as a player when winning this silverware looked harder than climbing Kilimanjaro blindfold with a piano strapped to your back, and Guardiola strolls to a maiden Champions League win as a coach with the odds not only stacked against him but sneering, too.

Why, against his better judgement, did he listen to his Bayern players, adjust his playing system to their wishes only to see Real Madrid romp, gleefully, to a 4-0 win in Bavaria to reach the 2014 final? With biographer Marti Perarnau present, Guardiola told his assistants: “I got it wrong, man. I got it totally wrong. It’s a monumental f—-up. A total mess. The biggest f—-up of my life as a coach.”

Why did Iceland‘s Eyjafjallajokull volcano explode just in time to ensure that Guardiola’s Barcelona, arguably a better side than Inter Milan that year, had to travel across Mediterranean Europe by coach instead of flying, thus costing them energy, concentration and competitive sharpness in the San Siro? Why the missed penalties from Thomas Muller in 2016 against Atletico Madrid in the semifinal, and Sergio Aguero last season in that ultra-dramatic thriller in which Tottenham eliminated City thanks to a wrongly awarded goal for Fernando Llorente?

Why, why, why? Yes, for those who appreciate the irony, I am mimicking Jose Mourinho’s “por que, por que, por que” in the 2011 semifinal when raging against Pepe‘s sending off after Madrid lost 0-2 at home to Guardiola’s Barcelona.

This competition isn’t choosy. It’s not just Guardiola who gets treated like a loved son one moment, then an unwanted trespasser the next. But perhaps he suffers more than most. More because he so cherishes clambering to the top of this particular pantheon, more because circumstances do seem to conspire against him more regularly than most — perhaps everyone.

Why, as his City side put together such a robust, grown-up, intense performance to win at the Bernabeu in February, did the world suddenly get shut down by a viral pandemic?

Is it personal? No. It’s just the eternal state of war and peace that exists between Guardiola and the Cup With The Big Ears. He is its hostage, we are mere witnesses.

But it’s a transfixing spectator sport.