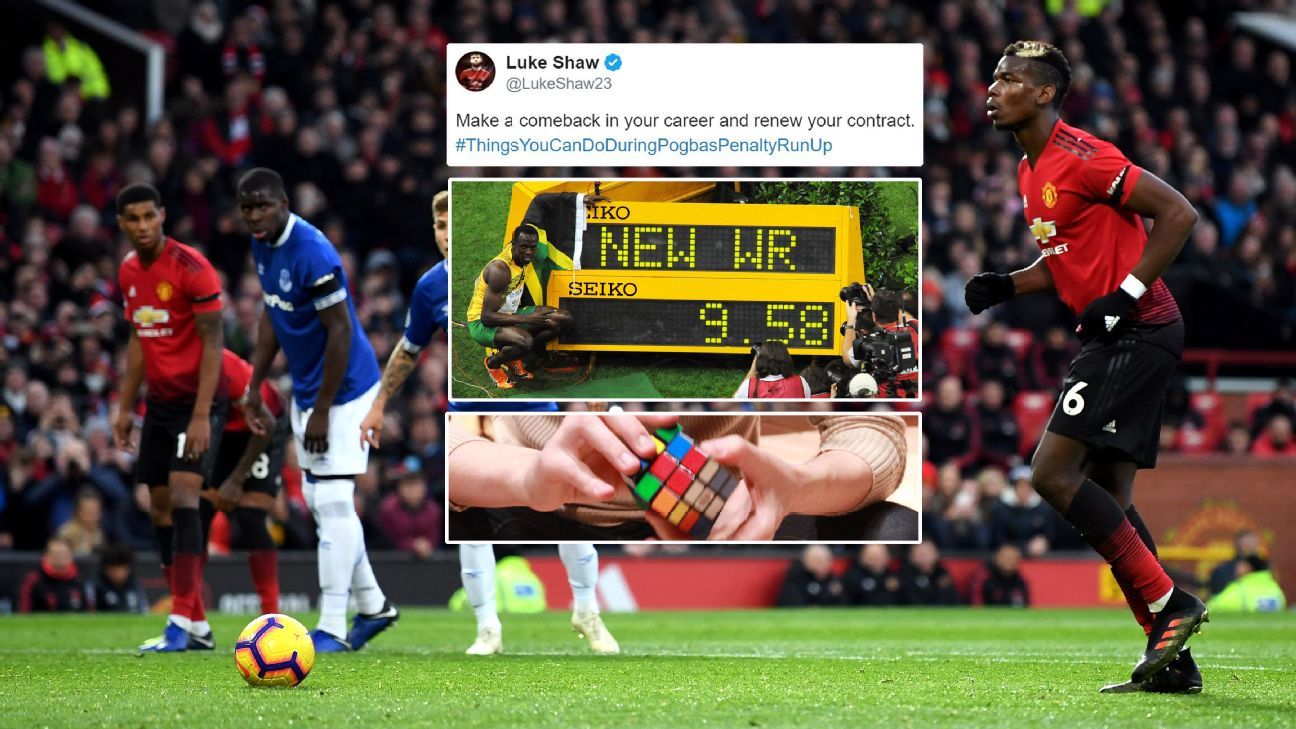 The most memorable moment came in the first half when the France midfielder was charged with dispatching a penalty to open the scoring.

He duly took 28 dainty steps and 10 whole seconds to complete his curious run-up before seeing his shot parried by Jordan Pickford, only to convert the rebound.

With heckling rife on social media, Luke Shaw joined in the Pog-trolling by joking that he managed to squeeze an entire career renaissance into the time it took his United teammate to shoot from 12 yards.

The United and England left-back’s goading tweet came complete with the hashtag #ThingsYouCanDoDuringPogbasPenaltyRunUp.

Make a comeback in your career and renew your contract. #ThingsYouCanDoDuringPogbasPenaltyRunUp pic.twitter.com/sxGx6C1i11

It was also pointed out that Usain Bolt has run 100 metres in less time (9.58 seconds) than it took Pogba to get from the edge of Everton’s area to the penalty spot.

Remember the infamous run-up from Italy’s Simone Zaza at Euro 2016 that seemed to last an eternity? Well, you could fit two of those into the time it took Pogba to get from A to B.

Somewhat astonishingly, it is also possible to complete two Rubiks cubes in that time, with the world record standing at just 4.22 seconds.

As for the ridiculous number of steps involved, Meghan Markle had to walk up fewer (around 20) to get into the church for her royal wedding at Windsor Castle.

According to The Times, Pogba has now taken a grand total of 100 steps ahead of the five penalties he has taken so far this season — two of which have been saved.

To put that in some kind of perspective, there are only 87 steps between the main chamber and the reflecting pool at the Lincoln Memorial in Washington D.C..

Speaking in the Old Trafford tunnel after the Everton match, Pogba was asked to explain his curious technique by a bewildered reporter.

“I always try to destabilise the keeper. That’s why I shoot like this,” the United star replied.

“I may practice to change it because maybe the goalkeepers are starting to know my steps, but the most important thing is when the ball goes in.”

In fairness to him, Pogba has now been involved in more goals (31) than any other United player since the start of the 2016-17 season, with 14 goals and 17 assists to his name.

His run-ups may be ludicrous, but he’s obviously doing something right.