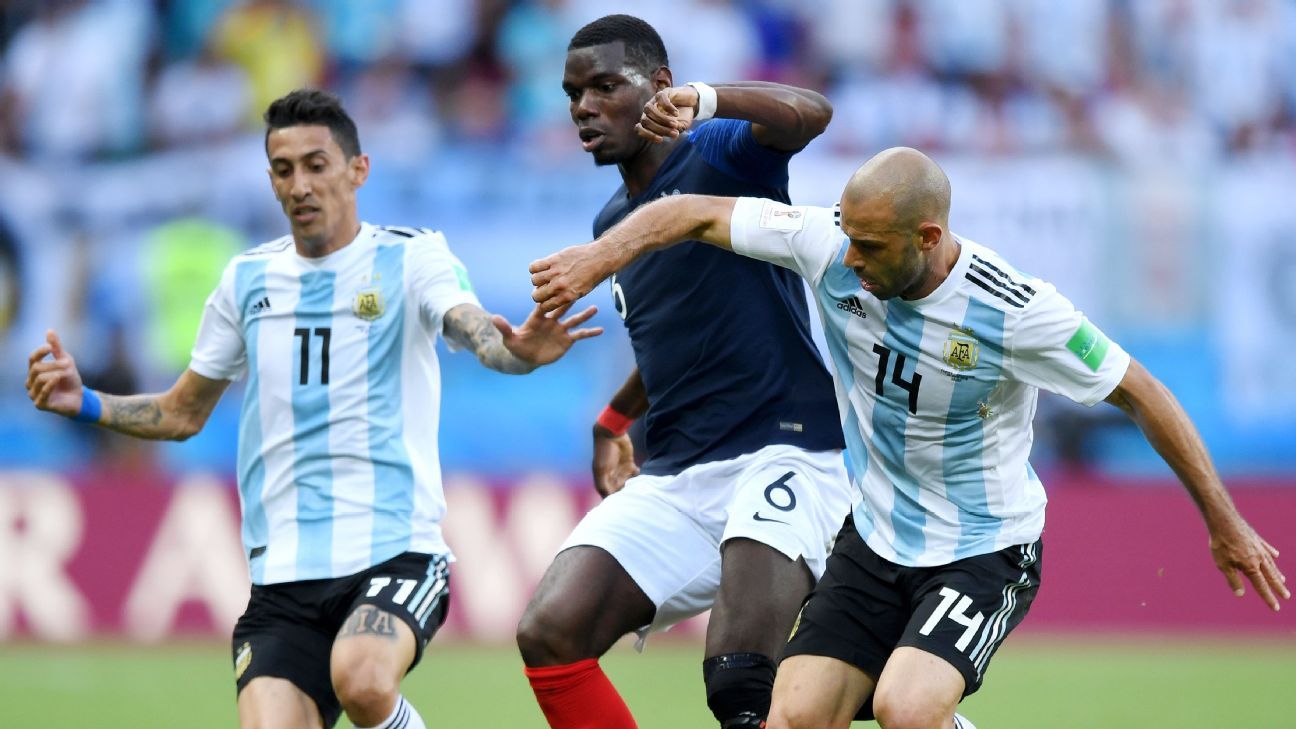 
As France defeated Argentina 4-2 and advanced to the quarterfinals of the World Cup earlier this week, it was striking to reflect that we had just seen a very different side of Paul Pogba.

We already knew about his outstanding passing range, but what we had not consistently seen, either at international level or at club level with Manchester United, was the dogged defensive discipline that we more often associate with his partner in France’s midfield: N’Golo Kante.

Against Argentina, though, Pogba was superb in this respect. He recovered the ball 10 times, twice as much as any other player on his team, and provided part of the defensive screen for the back four which meant that Lionel Messi barely had any room in which to wreak his unique brand of havoc.

So what has changed? First, it should be noted that this isn’t the first time Pogba has been impressive in his defensive duties. Most notably, he was outstanding in United’s 2-0 win over Chelsea during Jose Mourinho’s first season at Old Trafford.

That was a game in which he faced Kante, with whom he had been unfavourably compared for much of the previous week, and saw Pogba match his France teammate for tenacity, and get the better of him on the whole.

Pogba’s outing against Argentina also showed that, while he may still be best suited to an advanced role on the left side of a midfield three, he can perform to an elite level when in a deep-lying position. Versatility is the hallmark of the modern midfielder — witness Kevin De Bruyne thriving in a similar role for Belgium — and Pogba has that in spades.

But what does this mean for United next season? Well, it could help to take some of the defensive burden away from Nemanja Matic. A midfield two of Pogba and Fred should be too much for most Premier League midfields to handle, and give Matic more of the much-needed rest that he did not get last season.

A major criticism of Pogba last season was that his forays forward left Matic exposed, but against Messi — when he had to be exceptionally watchful — no such problem arose. If positioning has often been a problem for Pogba, then it is one that can be decisively remedied.

The other more familiar element of Pogba’s game that was on show against Argentina was his long-range passing. The fear with Pogba is that by sitting deep much of his creativity is lost — but one moment early in the first half showed how devastating he can be even when the opposing back four thinks it is at a safe distance.

Pogba, having been fouled, rose immediately to his feet — the cameras did not even have time to pan across — and struck an extraordinary free kick that travelled some 60 yards, dipped over three hastily recovering defenders, and into the path of the onrushing Kylian Mbappe. Mbappe was fouled on the edge of the area, leading to a free kick, but it showed Pogba can still be a playmaker from almost anywhere on the pitch.

This will not be news to regular watchers of his game, who will have seen him put together a magnificent stretch of form in his first season back at United — a period from late autumn and until Christmas during which he was imperious. Then, Pogba was staying deep and firing passes into the paths of speedy forwards.

Crucially, he is now playing in much the same setup for France as he is for United, within a 4-2-3-1 formation. As a result, when he returns to club duty there will be little need to adjust his game. The only challenge for Mourinho is to ensure that he continues to be surrounded by the same kind of speed that he has around him at international level, which is a strong argument for retaining the services of Anthony Martial.

Mbappe has been devastating for France in the same inside-right position which Martial could yet make his own at United, and so it would make sense to give Martial an extended run in the team there.

For now, though, it is simply good to see Pogba excelling for France in the manner that many knew that he could. If he returns to the Premier League in this sort of form then Mourinho can take credit for his development, and both manager and player should see plenty of success from his progress.