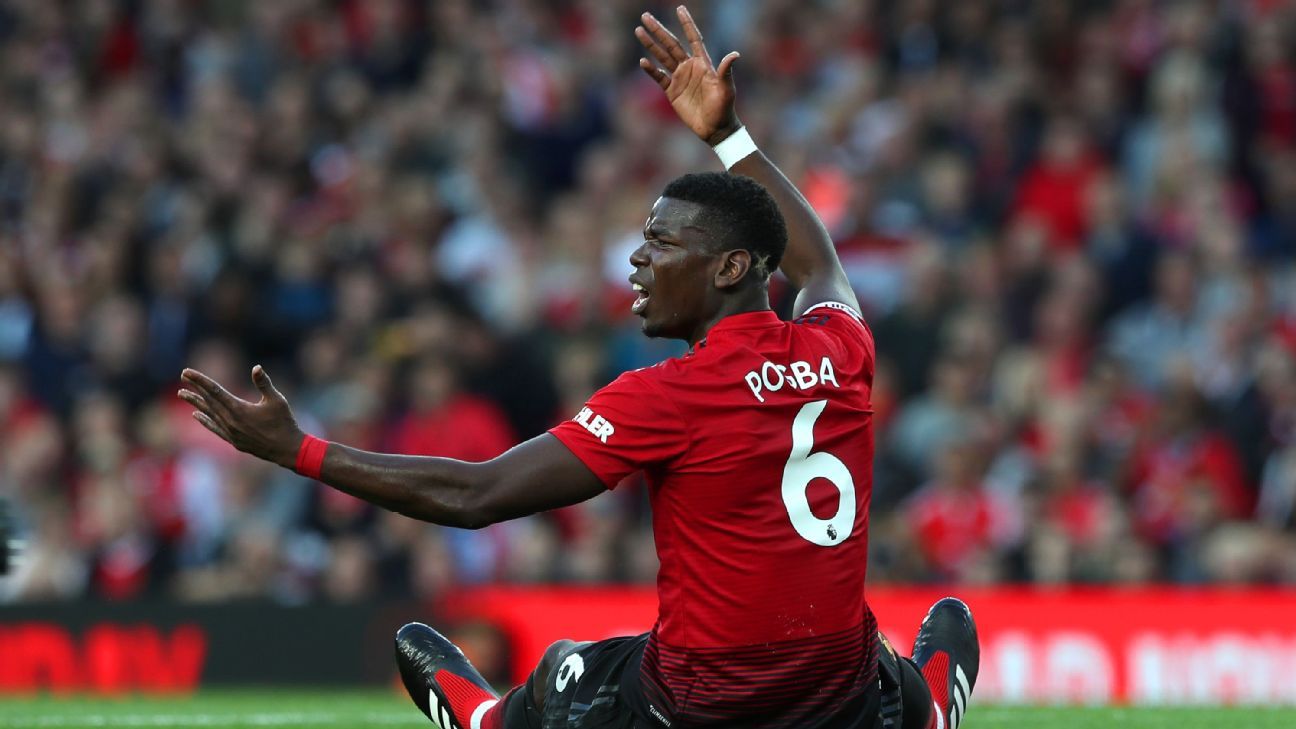 
Paul Pogba has rarely spoken to English journalists since returning to Manchester United two years ago.

We have been granted an audience with him a handful of times — once in a news conference to preview a Europa League tie against Anderlecht in Brussels in April last year and again at a TAG Heuer commercial event early last season.

On both occasions he was articulate and engaging. He walked into the media suite at Anderlecht’s Constant Vanden Stock Stadium wearing thick-rimmed glasses. “Do you always wear those?” he was asked by one journalist. “No,” replied Pogba. “Why, do you like them?”

ESPN also sat down with Pogba for a one-on-one before the World Cup. He is an intelligent, warm character with things to say on football and subjects far beyond. But despite encouragement to stop in the mixed zone — a section of the tunnel where journalists can wait for players as they leave the stadium after matches — it is always a long shot.

“Sorry, I don’t speak English,” he occasionally says, in perfect English, with a smile. He sometimes doesn’t even come through the mixed zone after games at Old Trafford, instead heading straight down the tunnel, across the forecourt to sign a few autographs and take a couple of selfies and then to his car.

He is not required to stop and talk. It is up to him. And on Friday night after United’s 2-1 win over Leicester, he decided he wanted to.

Word filtered down to the tunnel that there was a good chance Pogba would stop about half an hour after the final whistle. It still seemed unlikely given he had been asked to do the flash interviews for Sky Sports — the ones conducted immediately after the final whistle in front of the cameras — but four reporters waited around nonetheless.

It was after 11 p.m. when he eventually came through, accompanied by a member of United’s communications team. And then he started talking.

He said lots of things that were not controversial. He was honoured to be named captain. He wants to work hard for his teammates and for the fans to help United challenge for the Premier League title, and he “loves” the club having grown up in the academy.

But after a week that has seen speculation about his future at Old Trafford, he was, eventually, pushed about whether or not he is happy here.

It was a chance to knock down the stories about a rift with manager Jose Mourinho and put to bed all the talk of Barcelona and Juventus. But he didn’t.

“There are things I cannot say, otherwise I will get fined,” he said. It is as explosive a quote as you’re ever likely to hear in one of these chats.

In an interview that lasted a little under eight minutes, he did not mention Mourinho once. He said the word “trust” five times and went on to say that with France at the World Cup everyone “was on the same page” — including manager Didier Deschamps.

Listening to Pogba talk, it felt like he wanted people to read between the lines, knowing full well that if he went too far, he would land himself in hot water.

It is possible we have all got the wrong end of the stick, but then he has got access to enough social media channels to set the record straight if he wishes.

As of Monday morning, his last post to his 5.6 million Twitter followers was: “I’ll always give my best to the fans and my teammates no matter what’s going on.”

Barcelona can still buy players up until Aug. 31 but sources have made it clear to ESPN FC that Pogba is not for sale at any price during this transfer window.

His agent, Mino Raiola, has refused to comment on speculation that he is keen to move his client to the Camp Nou, and questions to him about the midfielder have all been met with the same response: “Ask Manchester United.”

If Ed Woodward sticks to his guns (he will) and Pogba doesn’t try to force a move (he won’t) then the Frenchman and Mourinho will be stuck with each other for at least another season. Mourinho will get his right of reply at his next news conference on Friday afternoon, but he will know there is no point in making this worse. It is also debatable whether he would win a battle a battle of wills, anyway, with Pogba expected to be at the club far longer than his manager.

Handing Pogba the captain’s armband against Leicester was seen, from the outside, as an olive branch after what has been a turbulent summer. It is likely that on Friday Mourinho will again talk up the 25-year-old in another effort to patch up what appears to be, at the very least, a strained relationship.

The one thing they will both be able to agree on is their desire for United to win. Pogba may be unsettled, but he was still able to put in a man of the match performance against Leicester after just four days of preseason training. Mourinho, for his part, celebrated Luke Shaw’s second goal like he had won the Champions League.

Pogba and Mourinho are two of the biggest characters at Old Trafford. And whether they are getting on or not, for now they need each other.