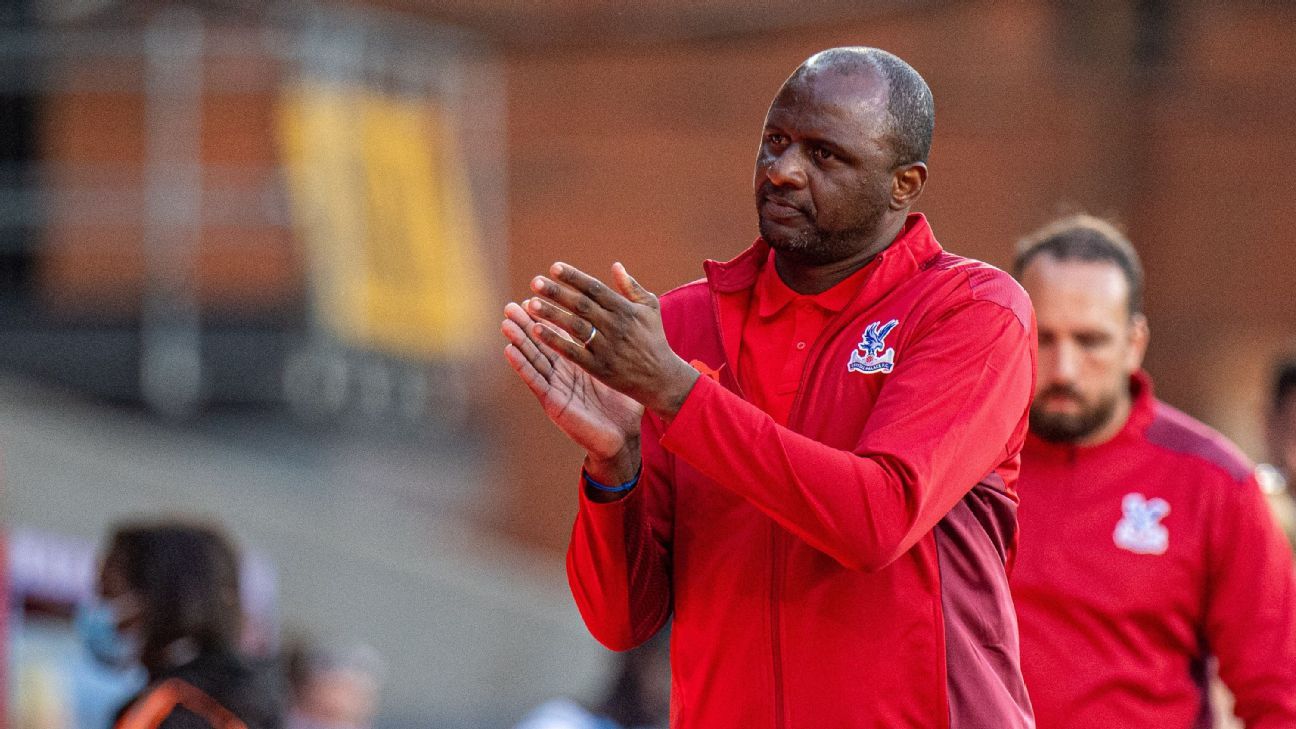 
Of all the subplots contained within Patrick Vieira’s return to Arsenal on Monday, perhaps the most curious is this: the man trying to beat the Gunners is also a man trying to buy them.

The 45-year-old occupies a curious position given that he’s now the manager of a Crystal Palace side attempting to win a Premier League game at Emirates Stadium for only the second time in 20 visits, while also remaining part of a consortium that had a £1.8 billion takeover bid rejected earlier this year. Spotify owner Daniel Ek was the front man, but within his inner circle were three club legends — Vieira, Thierry Henry and Dennis Bergkamp — who all hail from an era Arsenal have struggled to recapture ever since the trio’s playing careers ended in the mid- to late-2000s.

The fact that only three places and three points separate the Gunners from a Palace team for whom a top-half finish is typically the limit of their aspirations serves as another reminder of the decline Mikel Arteta is charged with reversing.

Vieira’s involvement with Palace and Ek puts him firmly in Arsenal’s past, present and future: a symbol of former greatness, an immediate challenge to overcome and a possible component part of a new era.

Kroenke Sports & Entertainment have continually dismissed any suggestion they would sell to Ek, but the presence of three players from the “Invincibles” era gives the bid an obvious appeal to supporters.

It has never been made entirely clear what role they would all assume, but Henry was pictured sat next to Ek at last month’s north London derby win over Tottenham Hotspur, suggesting it’s more than an exercise in clever public relations. Henry’s subsequent message that “we are here to stay” means KSE may soon have another bid to consider, and any change in stance would in fact complicate things for Vieira given his role at Palace.

A source at the Premier League has indicated that he would fail the Owners’ and Directors’ test if he were to try to become an Arsenal director under rule F.1.4, specifically on the grounds that “either directly or indirectly he/she is involved in or has any power to determine or influence the management or administration of another club or Football League club.” Equally, if he had any sort of management of administrative power, Vieira would be in breach of Rule I.2 and Palace would fall foul of I.1, both of which relate to individuals or clubs having influence at more than one team.

It remains possible Vieira could hold a more informal role, with the source suggesting an unpaid ambassadorial position could at least be submitted for consideration, but the man himself has never specified precisely what position he would assume.

“I was just expressing myself as Patrick, ex-Arsenal football player,” Vieira said when asked about his support for Ek’s takeover plans. “That comment was based on how the direction [of the club] was going. I was talking to somebody who had a different view and a different way of taking (forward) Arsenal Football Club.

“I am in a different position than a couple of months ago, so I’m not going to express myself in the same way than when I was just an ex-Arsenal football player.”

There was a time when it appeared Vieira would become Arsenal manager. Towards the troubled end of Arsene Wenger’s reign, Vieira was embarking on a positive start to life in the dugout with MLS side New York City FC. In 2016, he secured New York City’s first ever playoff appearance and followed that up with a second-place finish in the combined MLS standings behind Toronto FC.

By the time Wenger was nudged through the exit door in 2018, Vieira was under serious consideration to replace him — as was Arteta, then an assistant at Manchester City — before Arsenal settled on Unai Emery. Vieira ended up going to Nice that summer, watching Emery’s tenure unravel from afar and choosing to partner up with Ek as the opposition among supporters towards KSE grew to unprecedented levels. The sight of Arteta and Vieira in opposing dugouts at Emirates Stadium qualifies as another facet of the legacy Wenger’s tenure left behind.

Arteta was one of a plethora of signings charged with the responsibility of reestablishing the midfield authority that departed with Vieira when he joined Juventus in 2005. The titanic struggles between Vieira and Roy Keane personified the battle for supremacy between Arsenal and Manchester United either side of the Millennium that defined English football for a decade.

It is hard to overstate Vieira’s influence. Arsenal supporters voted him the fifth “Greatest Gunner” of all time in a 2008 poll (behind Henry, Bergkamp, Tony Adams and Ian Wright), but Wenger was clear in determining which signing would provide the catalyst for his success in north London. Occupying relative obscurity as a 20-year-old languishing in AC Milan’s reserves, Vieira joined Arsenal for £3.5 million in August 1996, two months before Wenger took charge, but he did so — and turning down Ajax Amsterdam in the process — in the knowledge his fellow Frenchman would be in the dugout.

“Right from his very first match [as a substitute against Sheffield Wednesday in September that year], when he was as yet unknown to the English public, he showed just how talented he was,” wrote Wenger in his autobiography, “My Life in Red and White,” released last year. “No one disputed his ability, and he gave me the credibility and the hold over the club that I needed in order to take it in the direction I wanted.”

During Wenger’s almost-22-year reign, no player made more appearances for him than Vieira’s 401 (Theo Walcott was next on 397). Three Premier League titles and four FA Cups followed, the last of which was secured with his final kick for the club — a decisive penalty in a fortuitous shootout win over United.

Wenger talked Vieira into staying that season rather than push for a move to Real Madrid, but he joined Juventus for £12m in 2005, chiefly because he was only offered a two-year deal aged 29 at Arsenal as opposed to the five-year contract on the table in Italy. Vieira later claimed he opted to leave because then-vice-chairman David Dein told him “we are neutral” over whether he stayed, having accepted Juventus’ offer — a stance that left him “angry, surprised and upset.”

Yet the Gunners’ approach was indicative of the shifting financial landscape resulting from their self-funded move to Emirates Stadium from Highbury. Vieira’s exit was followed by Robert Pires to Villarreal a year later and Henry to Barcelona 12 months after that. The club went from 2006 Champions League finalists to no European football at all in 2021 as Wenger gradually lost the battle to keep Arsenal competitive, not least due to a mixed record in the transfer market when more money became available again as the stadium debt eased. Vieira is a symbol of a bygone era, simultaneously a reminder of what was and what still could be.

“I had a chance to play for this club for nine years — I arrived when I was a kid and left as a man,” said Vieira on Friday. “This is the club where I played my best football so obviously going back will be emotional, but I will put that on the side because what is important for us is to perform well and try to get the points.”

Arsenal believe they already have a former midfielder steering them back to the top in Arteta, who was questioned during the international break by Henry.

“I don’t know if things are going in the right direction,” Henry said, a comment that is impossible to entirely remove from the context of his involvement in a possible takeover. Vieira has a chance to make a similar point on Monday.