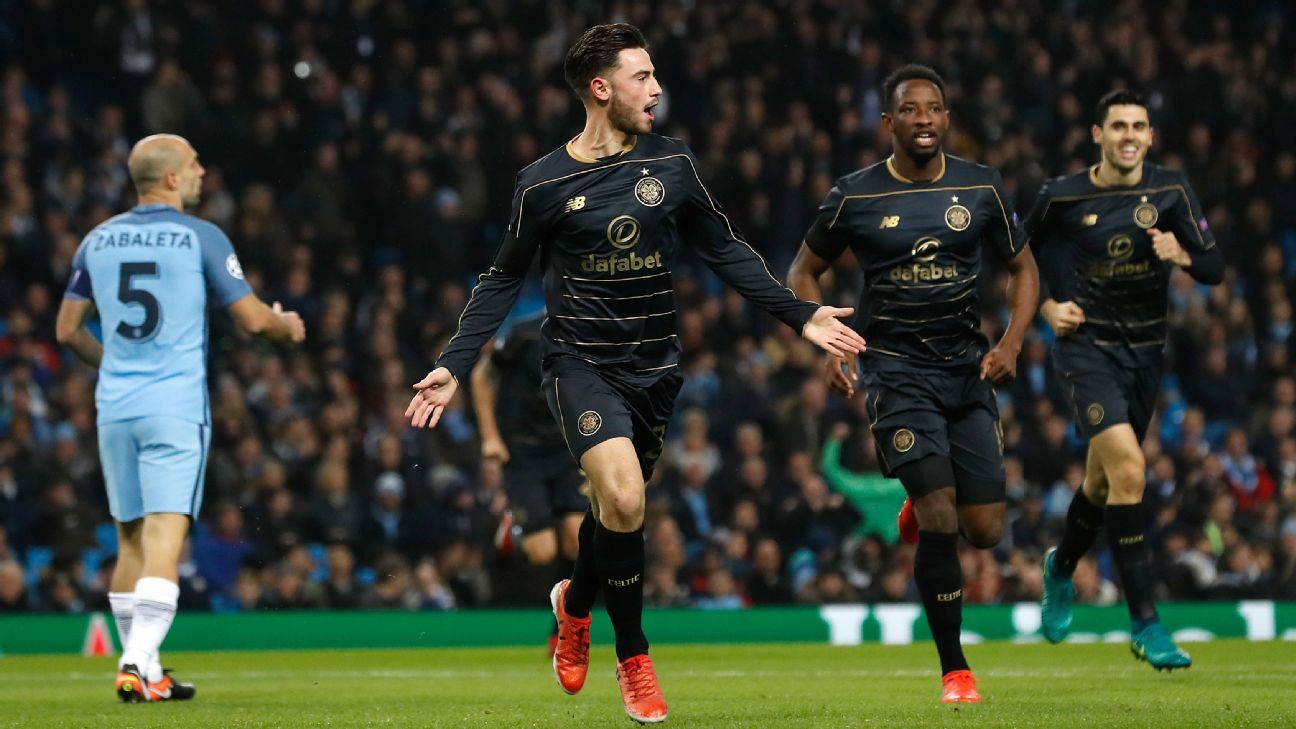 
Patrick Roberts admitted he had to persuade Manchester City chiefs to allow him to return to to Celtic.

The winger was desperate to sign on again at Parkhead after playing a vital part for Brendan Rodgers’ “Invincibles” last term as they completed a remarkable undefeated domestic campaign.

He has now sealed a one-year loan with the Scottish champions, but only after convincing City boss Pep Guardiola that Glasgow was the best place for him to develop his skills.

The Spaniard was reluctant to allow his talented 20-year-old — who had been linked with moves to Premier League club Southampton and French side Nice — to spend another 12 months north of the border.

But Roberts dug his heels in and got the move he wanted.

“It’s my development, it’s my game and I’ve got to be the one who plays it, so I had to express how much I wanted to come here for myself to improve as a player,” said Roberts at his official unveiling.

“I enjoyed the last 12 months and the six months before that so it was my decision to come back here.

“I thought this is the best place for me to develop, especially with the manager and coaches here, who can give me the platform to do that.”

Roberts added: “There were talks [with other clubs] and there were things going around. But for me it was finding the right option and the right decision and the one I came up with I feel is the best one.

“I didn’t speak to the manager here much over the summer as I was obviously still a City player, but before I left he and Peter Lawwell both expressed how much they wanted to sign me. That was obviously good for me.

“I had to go back for preseason with City and try to get into that team but then reality hits and you have to think about your own game time. I knew Brendan and all the coaches here would love to have me back and I would love to be back.

“Once the two clubs agreed it was more or less all go. I know a few fans were getting frustrated over how long it took but I’m just glad we can get it all sorted and get on with the rest of the season.”

City’s former £12 million signing from Fulham insists he has not given up all hope of breaking into Guardiola’s star-studded lineup.

He said: “City were good with me and obviously understood my position.

“Me wanting to come back here was in the best interests of myself and at the end of the day I’m the one playing the football so I have to be the one making those decisions.

“They were really good with me and allowed that to happen.

“Celtic wanted to sign me permanently but City being my parent club didn’t want to sell me so from that point of view it’s good that Pep still wants to keep me involved.

“There’s always a chance [I could return to City]. It’s all about how you perform and my mindset is to improve every day then hopefully reach the highest level I can be.”

For now Roberts is determined to make his mark again at Celtic Park and is looking forward to another taste of big Champions League nights in the coming weeks and months.

The Hoops have landed a mouthwatering draw that will see them take on Bayern Munich, Paris St Germain and Anderlecht in the group stage.

But Roberts reckons no one should be writing off Celtic’s chances of shocking their big-spending rivals and claiming a place in the last 16.

“Being in the Champions League gives us players a big buzz and I can’t wait to get started,” said the England Under-20 international.

“It’s a good draw, we enjoy playing against these kind of teams. They will come here and face some big pressure with the fans and the way we play as a team. Hopefully we can be a surprise package this year.

“Of course we have a realistic chance of qualifying out of the group. You have to play the best teams in Europe anyway if you want to go far so we will take it in our stride.”