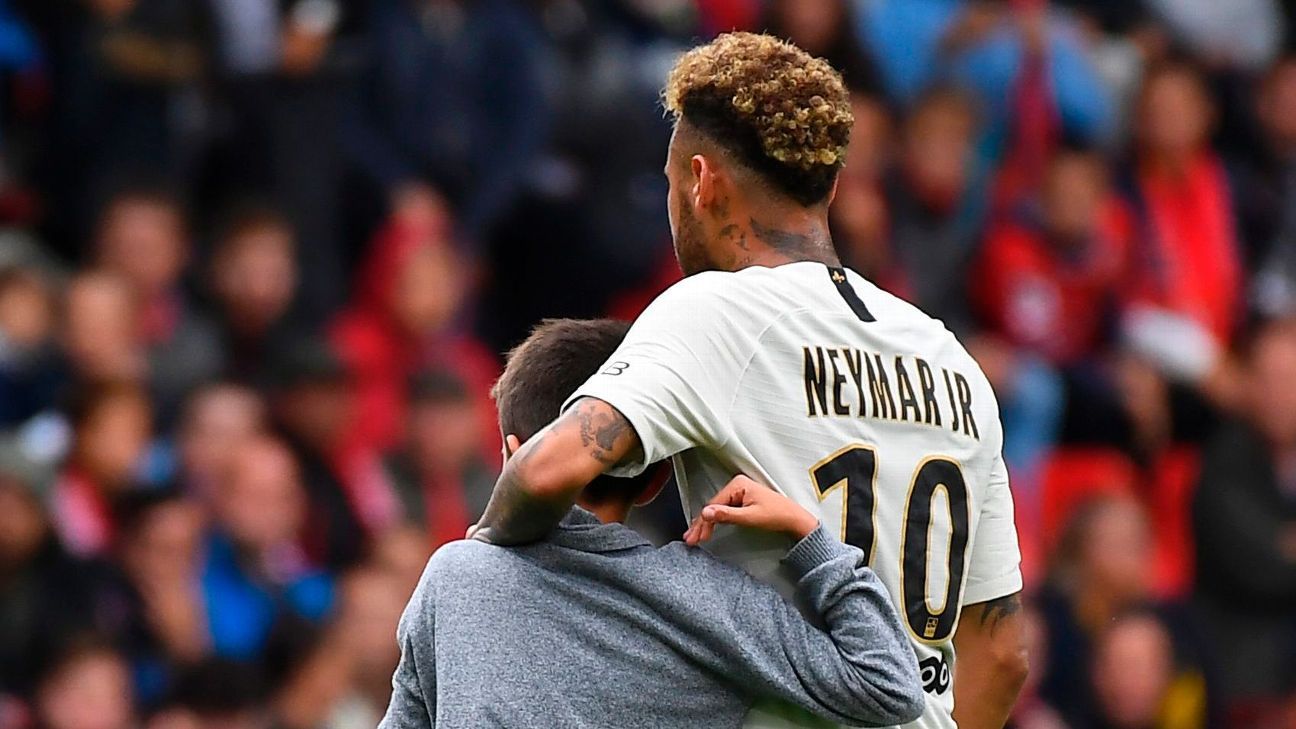 
Neymar has stated that he will continue to show generosity towards children who take to the pitch after the Paris Saint-Germain star gave his shirt to a young supporter who sought him out in Rennes.

The Brazil international provided an assist as the French champions made it six wins from a possible six in Ligue 1 with a 3-1 victory against Stade Rennais at Roazhon Park. He said after the game that he will not change how he interacts with those fans.

“I am happy when I get attention away from Paris, particularly from a kid like that,” Neymar told Esporte Interativo after the Sunday’s game. “It is something natural, pure, and I will continue to do what I do.”

On the topic of the match, the former Barcelona man insisted that he was not unhappy with being substituted and praised PSG coach Thomas Tuchel’s approach.

“People thought that I was waiting to go off, but I apologised for my bad pass,” Neymar said. “Nobody likes being substituted but I was not angry — ultimately, it allows me to recover.

“I can play any position in attack and I am fine with that. Whenever I am on the pitch, I am there to help my teammates.

“[Tuchel] is a young coach and he has his way of coaching. We like what he is doing at the moment — the way he trains and the fact that he is in constant contact with us. Thanks to his work, I hope that we have a great season.”

Tuchel himself was relieved that his players fought back to beat Rennes after a sluggish start that the German tactician was unsurprised by.

“The first half was very difficult — we were not ready for this game,” said the former Borussia Dortmund and Mainz 05 boss. “Rennes have a lot of quality and play with a lot of intensity.

“They are a tough team to face on the road. We were happy to still be in it at half-time as we might have conceded two or three goals.

“In the second half, we changed our approach. I am very happy we did it. It was a very good reaction.”

Speaking with beIN Sports France, vice-captain Marquinhos — who was skipper in Thiago Silva’s absence — praised his team’s recovery from a goal down.

“Yes, it was a difficult win,” the Brazil international admitted. “In the first half, we wasted a lot of easy balls and did not play with intensity demanded by the coach.

“We wanted to come and win here with style and collective intensity — we had a good reaction at the end of the first half and continued it into the second half.”

Eric Maxim Choupo-Moting grabbed a late third goal for PSG as a substitute and was delighted to get his first goal for Les Parisiens.

“True, it was an important goal,” said the German-born Cameroon international. “I was happy to score and win. Rennes played well, and every team gives 120 percent against PSG.

“In the end, I am happy to have scored and we are pleased to have won. Of course the goal is important for confidence but my priority was to integrate well and show my qualities on the pitch. Thomas [Meunier]’s nice pass made things easy.”

Choupo-Moting — who played at Mainz 05 — also credited Tuchel with PSG’s turnaround and expressed his happiness at working under with the German coach again.

“The coach was not happy, and he made that clear to us at the break,” PSG’s new No. 17 said. “He showed us where we had to improve, and we acted on his instructions — it worked in the second half.

“It has been five years since the coach and I worked together but I learned lots from him at Mainz. He is a good coach for me, he loves his football and he knows his tactics.

“He is a perfectionist and wants 500 percent from you at training. We have a very good relationship and we have kept in touch. I am very happy to be working with him again.”