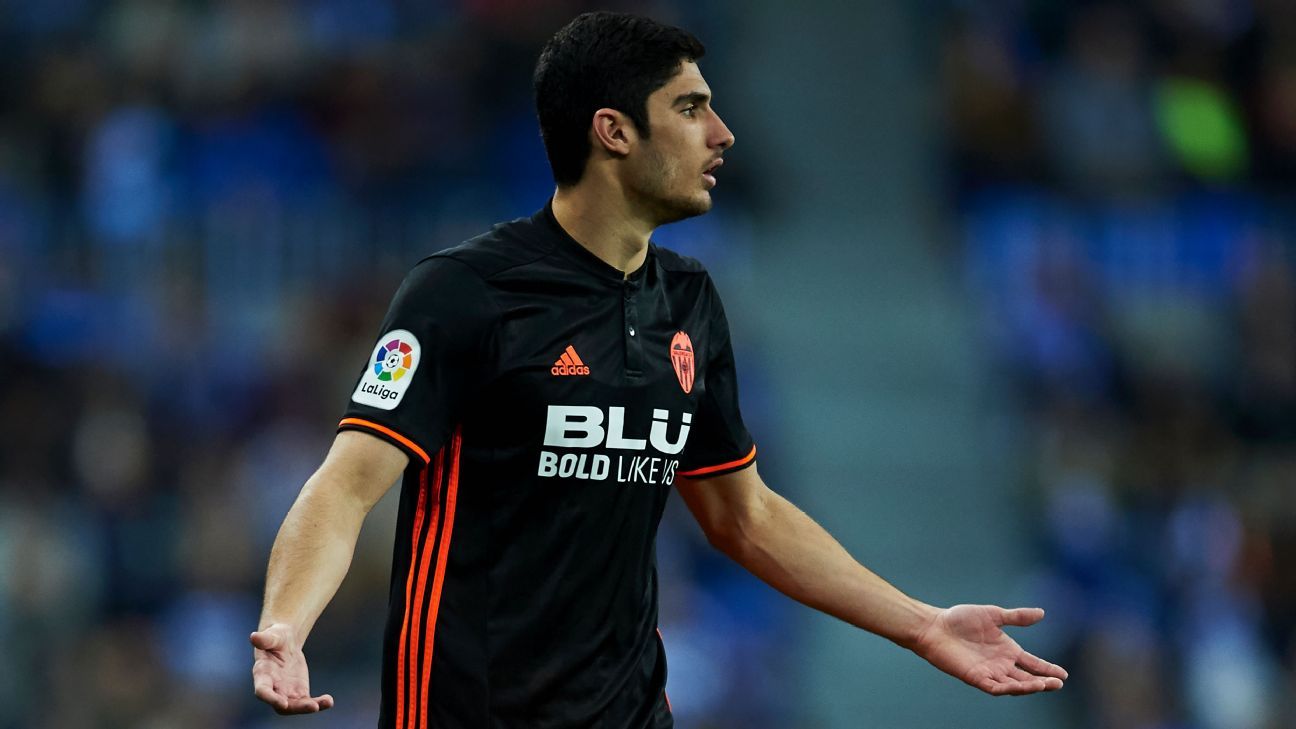 
Goncalo Guedes’ father believes Valencia will make a bid to acquire his son from Paris Saint-Germain this summer, a move that he claims would benefit all parties.

No buy-out option was included in the deal that brought the Portuguese winger to Valencia in September on a season-long loan from PSG.

Valencia are keen to keep the 21-year-old beyond June 30 and Le Parisien reported last week that the French club is willing to negotiate and sell Guedes for €40 million to abide by UEFA’S Financial Fair Play regulations.

“We know that [Valencia owner] Peter Lim is trying to sign Goncalo but it depends on many factors,” Guedes’ father Rogerio Guedes told Tribuna Deportiva. “I don’t think Valencia are going to let go of this opportunity considering that next season they will play in the Champions League.

“My son would like to continue but right now, we don’t know anything. It depends on PSG. We also have to see if he will go to the World Cup. We will have to wait until June 30.”

Tied to PSG until June 2021, Guedes played just once for the French side in Ligue 1 following his €30m move from Benfica in January 2017.

However, he has been a regular under Marcelinho at Valencia, where he has scored four goals and set up nine more in 29 league appearances to help Los Che remain on course for Champions League football next season.

“He wanted to play more and in Paris there were many stars, a lot of great players,” Rogerio said. “At Valencia he has found more calmness. He is working very hard and has to continue.

“No one knows what will happen, but for the time being he is very happy here and eager to continue. As a father, I think the best thing for him would be for him to continue at Valencia.”

Rogerio believes it would be a win-win situation if Valencia were to make Guedes’ move permanent.

“I don’t believe Goncalo’s future belongs in Paris because of its sporting structure,” he said. “To have Goncalo sitting on the bench does not interest PSG. If Goncalo continues at Valencia everyone wins.

“I think he could continue at Valencia, keep growing and he would become more valuable for Valencia. He can continue [here] for one or two more years. To be a financial asset of Valencia and then make a triumphant exit.”

Meanwhile, Damien Comolli, who has worked for Arsenal, Tottenham Hotspur, Monaco and Saint-Etienne in a variety of sporting director and scouting roles in the past, has branded PSG’s situation with Jese Rodriguez a “financial fair play (FFP) nightmare.”

Speaking with SFR Sport, where he is now a regular pundit, Comolli laid into the Spaniard, who cost around €25m back in the summer of 2016 and recently went AWOL with loan employers Stoke City.

“Right now, he is worth absolutely nothing — zero.” Comolli said. “Either PSG end his contract and write him a cheque, or they say to him: ‘agree a deal with a club and we will negotiate a percentage in the case of a resale.’ However, Jese remains a nightmare for PSG as far as FFP goes.”

Speaking of Grzegorz Krychowiak, also on loan in the Premier League this season but with West Bromwich Albion, Comolli was more positive about PSG’s situation.

“PSG can count on getting about €10m back from him,” said Comolli. “He is still a good player with interested clubs in France, Spain and Italy. The best strategy would be to loan him out with an option to buy.”

Man City or Chelsea to win final? Knockout rounds’ best player?
Barcelona board uncertain about Koeman’s future
I know reason for club’s decline but can’t say
‘Angry’ Zidane howls over VAR call in Real Madrid draw to Sevilla
How the 2018 MLS MVP got fit, and got back onto the field