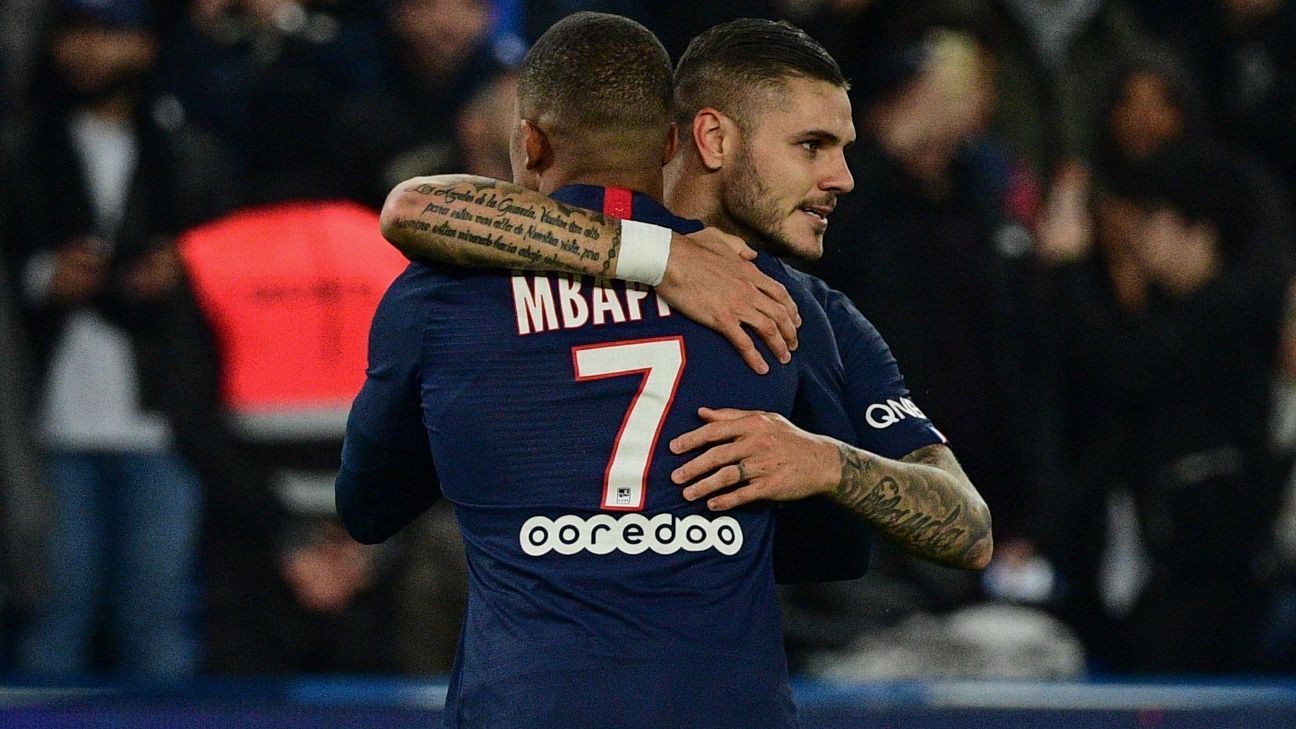 
Mauro Icardi and Kylian Mbappe scored twice each as Paris St Germain extended their lead at the top of Ligue 1 to eight points with a 4-0 crushing of bitter rivals Olympique de Marseille at the Parc des Princes on Sunday.

Argentine striker Icardi and France forward Mbappe netted all the goals in the opening half to put PSG on 27 points from 11 games, eight ahead of their nearest challengers Nantes, and leave OM in seventh place on 16 points.

Icardi has now scored seven goals in his last seven games while Mbappe has struck five times in two matches for PSG, who were without the injured Neymar.

OM have not won against PSG in all competitions in their last 20 meetings since 2011 – the year Qatar Sports Investment took over in the capital before investing more than a billion euros in transfers.

“We have been hammering you for eight years and it’s not over,” a banner in the Auteuil curve of the Parc des Princes read.

The banner was spot-on as PSG overwhelmed the visitors, their attacking trio of Mbappe, Icardi and Angel Di Maria proving impossible to handle.

“I’m happy to score those goals, that’s why I came here,” said man of the match Icardi.

Icardi told Canal+: “I came to give best and with a desire to score, so I am happy to be doing just that.

“To play for PSG, with these sorts of players… It is surely the best team I have played in. I feel very good and there is a good chemistry with my teammates — it enables me to score goals.”

“The system is not the question, it’s their individual qualities that made the difference. There is no shame, I’m proud of my players,” he said.

Marseille’s Dimitri Payet made his return after a four-match ban for insulting a referee while Mbappe was handed his first start in two months after struggling with injuries.

The 20-year-old, who scored a hat-trick after coming on as a second-half substitute against Club Brugge in the Champions League this week, threatened early on but it was Icardi who found the back of the net first.

Steve Mandanda parried the Argentine’s header for Icardi to fire home from point-blank range shortly after Valere Germain had missed a great chance for the visitors.

The French international keeper was beaten by Icardi again in the 27th minute, the striker heading home from Marco Verratti‘s through ball.

Mbappe made it 3-0 five minutes later, tapping in from Di Maria’s cross.

The Frenchman was at it again one minute from the break, collecting a defence-splitting pass from Di Maria before curling a 16-metre shot past Mandanda.

PSG took a more casual approach in the second half but came close to adding another, Mbappe missing a sitter from Icardi’s pass and the opportunity to become the first player to score a hat trick in the French “classic”.

He was replaced by Edinson Cavani as the Uruguay striker made his comeback after a two-month injury layoff.

The result lifted Rennes up to ninth in the standings on 15 points, ahead of 12th-placed St Etienne on goal difference after Les Verts were held to a 2-2 home draw by Stade de Reims – the first time they dropped points in the league since coach Claude Puel took over three weeks ago.

Reims are fourth on 18 points.