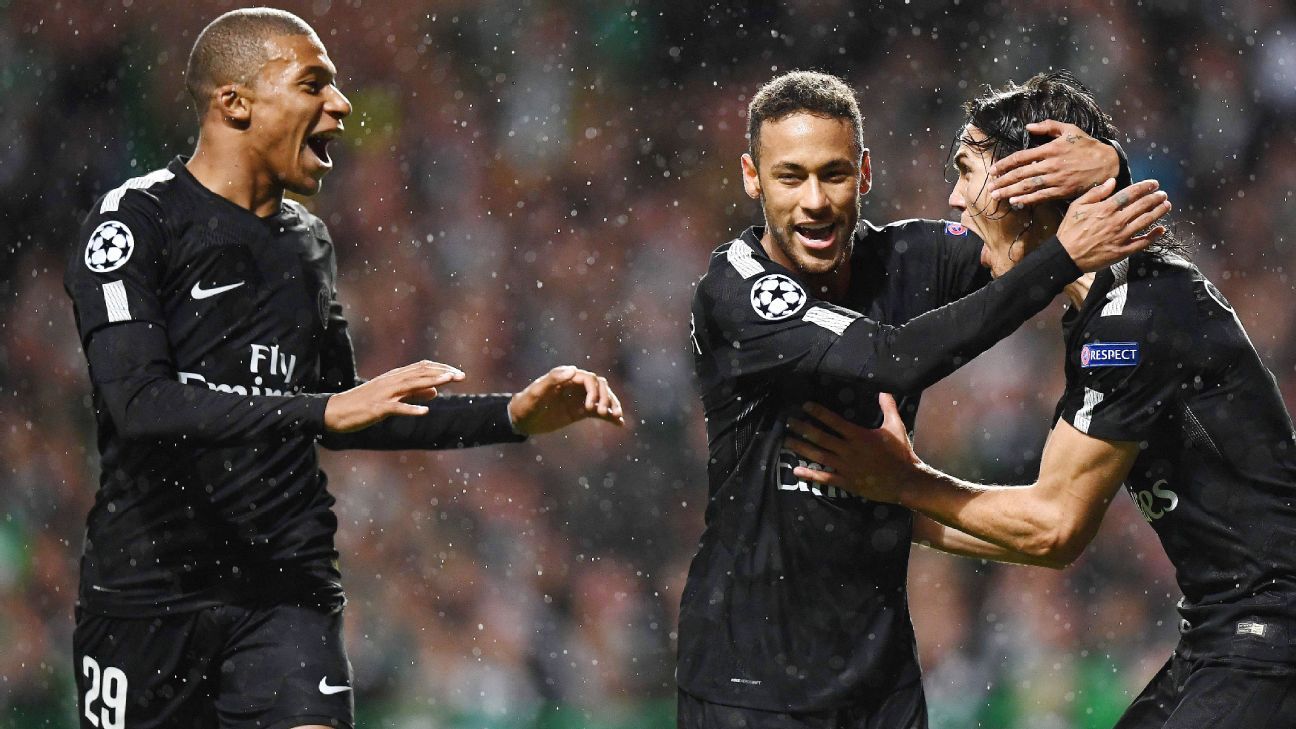 
Edinson Cavani and Kylian Mbappe are both hoping Paris Saint-Germain teammate Neymar will win the Ballon d’Or with the French club.

PSG trio Neymar, Cavani and Mbappe were all named among the 30 contenders for the 2017 Ballon d’Or on Monday.

Cavani and Neymar had a well-publicised spat over who would take a free kick and penalty in the recent game against Lyon, though the Uruguay international says any differences have now been ironed out and that he is hopeful the ex-Barcelona man can get his hands on football’s most prestigious individual honour.

“I spoke with him and told him what I thought, but they’re things that stay in the dressing room,” he told Ovacion. “I’m not going to tell you what we said to each other. The only thing I want is that all those who join the team do so with the intention of fighting for the team’s goals. Individual honours will come because the team does well, that means everyone is working well.

“And if we have the best in the world, that’s great for me. I have said several times I want him to have the Ballon d’Or because if that happens it means he’ll have scored lots of goals and he’ll have helped us win things. And what I want is to win things, that’s what interests me.”

Neymar came third in the 2015 poll for the Ballon d’Or and was fifth last year, while he partly moved to PSG from Barcelona in the summer to step out of the shadow of former teammate and five-time winner Lionel Messi.

Neymar has started brightly in the French capital, providing six goals and five assists in just six Ligue 1 appearances for his new club, and has helped them to a 100 percent opening in the Champions League.

As well as Cavani’s support in his quest for this year’s Ballon d’Or, Neymar has also received the backing from fellow PSG teammate Mbappe.

Mbappe, 18, who is the youngest player to have ever been nominated for the prize, says he is there to “help” Neymar win it, while he is confident the forward will lead PSG to Champions League success.

Asked about the competition with Neymar for the prize, he told France Football: “I do not see myself in competition with my teammates. Today, Neymar is our best player. Therefore, it is him at PSG who stands the best chance of winning soon.

“I am here to help him and I will do everything to make sure that he gets there because he is very close to winning this award. He will also help us to win the Champions League.”

However, Mbappe also said he harbours dreams of winning the Ballon d’Or for himself one day.

“I have always liked to dream,” he said. “However, I must admit that I could not imagine this [nomination] — it is extraordinary. Thanks to my hard work, I have reached a very high level in a short space of time. It is up to me to do everything I can to stay there and also, why not, go higher. I will continue to dream while working hard. I do not know where my dreams will take me.

“It is quite normal for a kid to dream about the Ballon d’Or, no? This is also the reason why it is truly a big honour for me to be part of this list. However, I am also lucid. Everything moves so fast in football right now and I know that it is possible to quickly fall out of this group. It is up to me to do everything to stay there.”