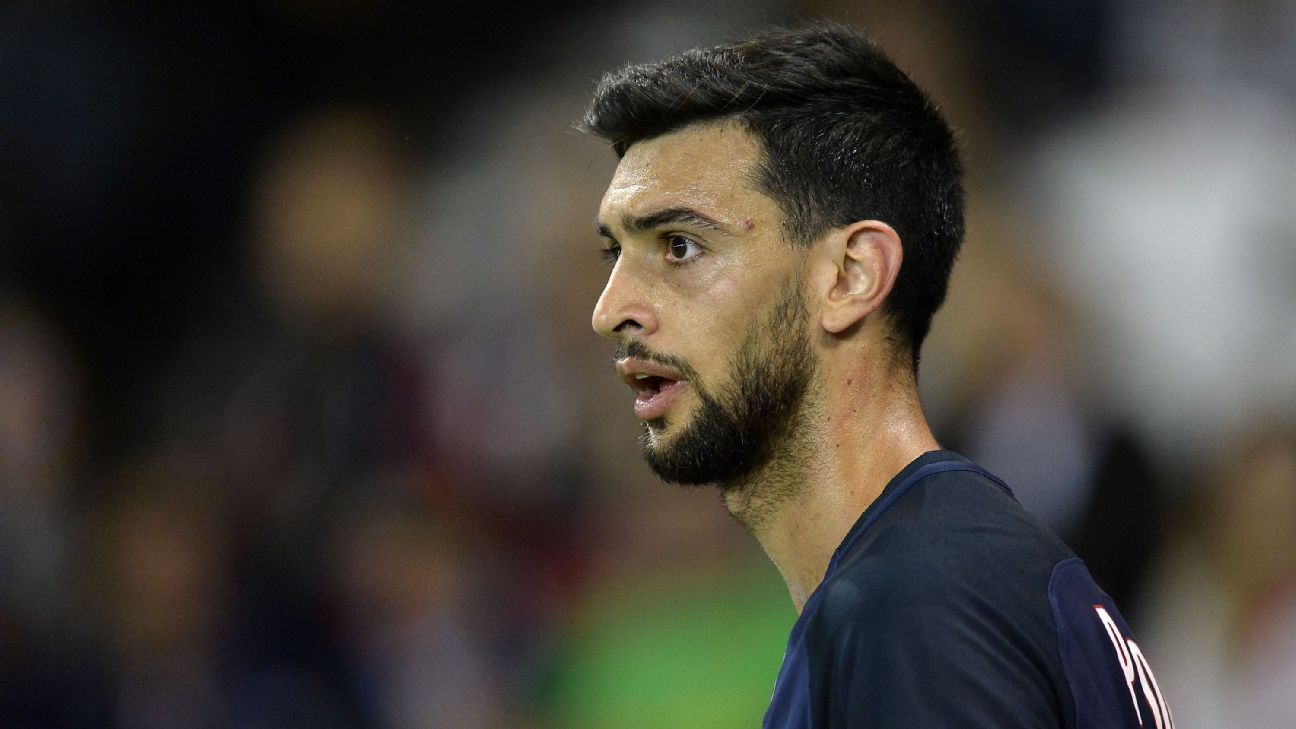 
After a flash of brilliance in Paris Saint-Germain’s 6-2 thrashing of Toulouse at Parc des Princes in Ligue 1 last month, Javier Pastore’s season has taken a disappointing — and painfully familiar — turn.

Injured while on duty with Argentina during the most recent international break, the fragile playmaker has not featured for the French capital outfit since an unsatisfactory 84-minute outing in the 3-0 home win over Saint-Etienne in Le Championnat.

Pastore, 28, will miss Saturday’s trip to face Montpellier in the league and is also a strong doubt for the UEFA Champions League home encounter with Bayern Munich, as well as the final domestic clash with Bordeaux in Paris before his teammates join their respective national teams.

Because of his latest injury setback, El Flaco is not certain to feature again for PSG before the approaching international break and has been overlooked by Argentina coach Jorge Sampaoli for the upcoming 2018 FIFA World Cup qualifiers against Peru and Ecuador regardless of whether or not he recovers.

Pastore has not reinjured his glass-like calves but an old wound has bled, which has created pain and prevented the South American from featuring at all against Metz, Celtic and Lyon, while limiting him to training sessions with the fitness staff.

Those close to Pastore hope he will return to action shortly and have stressed that it is nothing serious that could keep him out for a long period of time — like last season’s lengthy lay-off — but that does not change the bottom line of the issue for PSG.

Non-serious injury or not, the time has arrived for Les Parisiens to take a bold decision regarding the gifted but physically flawed creative genius.

Pastore is a sublime player to watch and has conjured up numerous memorable magic moments over the years, while he is also now the longest-serving player under Oryx Qatar Sports Investments (QSI) since Blaise Matuidi joined Juventus.

The problem with the former Palermo man, though, is that as enjoyable as he is to watch when fit and in form — an increasingly rare combination these days — he is so fragile that he cannot be relied upon at any point during the campaign.

Before the arrivals of Brazilian superstar Neymar — who will not play Saturday against Montpellier — and rising French talent Kylian Mbappe this summer, PSG were in a position to indulge Pastore and patiently wait for him to return to fitness each time he suffered a setback.

However, with the French giants’ project now into a new stage with more money in play than ever before, there is no more room for passengers in the squad and that is sadly what Pastore has become.

Despite his flaky record over the past few terms, the man from Cordoba remains a popular squad member among his teammates and the supporters.

Pastore is also very well-paid, though, and the question will inevitably be raised either in January or next summer as to whether or not he justifies the money PSG pay him.

Sporting director Antero Henrique has shown himself to be a man of significant pragmatism and it is only a matter of time before he looks at new ways to streamline a talented but unbalanced squad in terms of its attacking options.

Pastore is often exempt from criticism because of his occasional flashes of brilliance when fit, possibly a bit of sympathy due to his frequent injuries and his status as the first big-money signing made under QSI’s ownership.

With financial fair play (FFP) now a significant consideration for PSG moving forward, though, the mercurial No. 27 can no longer expect to not be subject to scrutiny — notably as far as Henrique is concerned.

If sacrifices must be made to balance the books in the future, then Pastore has to be one of the first to be considered by the Portuguese transfer guru because ultimately, he contributes precious little over the course of each term.

The lanky attacking midfielder’s absence in Montpellier this weekend, in isolation, is not a huge problem. Unai Emery’s men can do without him in a Ligue 1 match like this. Against Bayern in the Champions League next week, though, Pastore would have been extremely useful and potentially decisive because of his ability to invent opportunities from nothing.

Having not played at all since the last international break, he will only be fit enough for a substitute role at best against the Germans and even that is far from guaranteed. This season is going the way it usually does with Pastore — a brief moment of magic, in this case a sumptuous finish in the thrashing of Toulouse, followed by an extended period of injury woe.

If the Argentine wizard’s regular participation in the biggest matches could be counted upon, then he might still be worth persevering with. However, the truth is that Pastore is now a luxury that PSG can no longer afford if they want to have a flawless starting XI. Other areas of the squad, notably defensive midfield, need strengthening and the money invested in this delicate star could be better spent elsewhere.

Pastore’s career, not only his time with the Ligue 1 giants, could ultimately become a story of what might have been. There is still a chance that he could find some consistency away from Parc des Princes but the high-pressure environment in Paris is now too much for him.