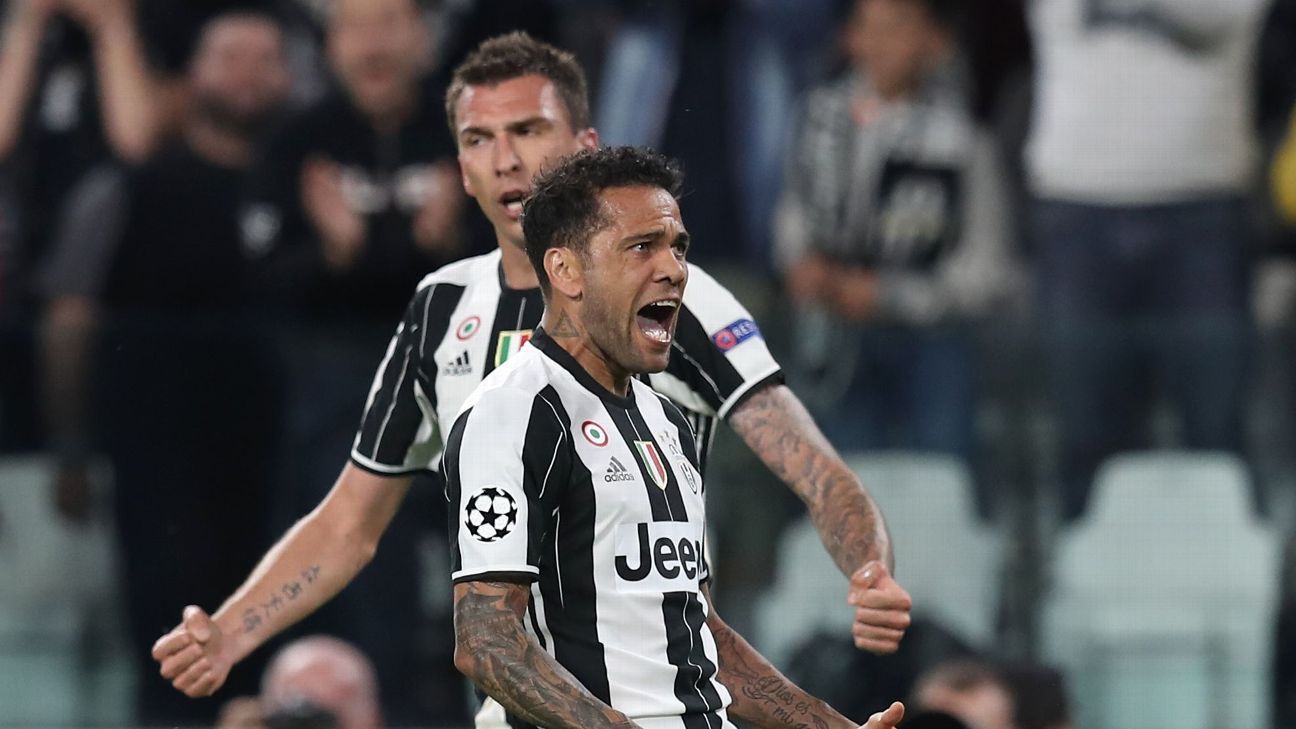 
PARIS — Paris Saint-Germain have confirmed the signing of right-back Dani Alves on a free transfer after the Brazil international rescinded his Juventus contract.

The former Barcelona and Sevilla man, 34, was widely expected to join Manchester City and reunite with coach Pep Guardiola after their time together at Camp Nou but an ESPN FC source has said that PSG offered to double the Premier League club’s salary offer.

Alves was apologetic towards City coach and former Barcelona boss Guardiola before he lauded his new employers ambitions and addressed his family’s needs.

“If Pep feels hurt, I would like to apologise,” Alves said at his unveiling in the French capital. “The same goes for City. However, I take responsibility and I made the right decision with this move. I want to continue to be a champion.”

Alves admitted that City were not the only Premier League club interested in him but that he had to put his family first after he prioritised himself by moving to Juventus from Barca.

“I was not only of interest to Manchester City but other English clubs too,” claimed Les Parisiens’ new No. 32. “However, there is a very interesting project here. I spoke with the City bosses and I spoke with the president, who told me all about this club.

“PSG are ambitious and desire to win a title that it has not managed to for now [the UEFA Champions League]. I have friends here and my wife likes this city very much — these were several elements that convinced me to change my mind.

“I want to be a part of this long-term project. With Juve, I was a little selfish and I took the decision alone. This time, I decided to be less selfish and to make sure that there was a connection everywhere.

“I want everybody to be happy, particularly my family. It is because of this that I mainly chose to come here.”

Paris-based ESPN FC sources revealed that sporting director Antero Henrique and his assistant Maxwell — Les Parisiens‘ recently retired former left-back — worked tirelessly to land Alves and that the latter’s friendship with his compatriot played a key role in the deal.

Star man and midfielder Marco Verratti has been linked heavily with a move to Barca this summer but Alves wants the Italy international to remain at Parc des Princes to aid a push for Champions League glory.

“I have come here to play with him!” Alves exclaimed. “Otherwise, why would I have joined? That is the message I would like to send to him.

“I have come to play alongside him and I want him to help us to realise our dream [of Champions League glory]. This dream is very close. The stronger we are, the more opportunities we will get to make this dream a reality.”

“This is something that has a personal and professional side,” he said. “Maxwell is a member of staff here and he fought to bring me here. I will repay him each day.

“I am itching to get started and to be on the pitch. I want to give my best for my teammates and the club.”

Alves is expected to feature in coach Unai Emery’s squad for the International Champions Cup in the USA and depart with the group on Saturday.

“In recent years, I have been able to gauge the incredible growth of this club, which has become a European football powerhouse,” he said. “It’s very exciting to now be part of this great project! In all the clubs where I have played, I have always given my best to help my teams achieve as much as possible. Believe me, I am coming to Paris to win. I know the ambitions of my new club and the expectations of its many fans around the world. We’re going to share in some great times, I’m certain of that.”

Alves was expected in Manchester on Tuesday, so it was a surprise for City when he touched down in France instead and underwent his medical at the American Hospital of Paris in the suburb of Neuilly-sur-Seine — not PSG’s usual Pitie-Salpetriere facility — before penning the contract.

Alves gives PSG the experience boost they clearly needed after last season’s disappointment in both Ligue 1 and the Champions League.

However, Alves also brings a winning mentality with him that will aid Unai Emery’s men and boasts seven league (six in La Liga and one in Serie A), six domestic cup (five Copa del Rey and one Coppa Italia), three Champions League and two Europa League titles in a collection of 30 pieces of silverware collected during his career in Europe.

He told his fans via Instagram: “It’s lit, my friends. As human beings we are moved by challenges, you must prepare to face them without fear of consequences because of your decisions. They come full of difficulties but having confidence and working hard will carry you along. I am from the Northeast and I have been ready for anything since I was a kid. Inside me is much love and passion and my soul has an insatiable thirst that only champions have.”

Alves has signed in time to be part of PSG’s International Champions Cup squad in the United States this summer and takes some pressure off of positional rival Thomas Meunier’s recovery from surgery on a left ankle problem before the end of last campaign.

“I’m delighted and very proud to welcome Daniel Alves to our club,” PSG CEO EO Nasser Al-Khelaifi said. “Daniel has not only been one of the world’s best defenders in the last dozen years, he is also a recognised and well-liked figure among football supporters on every continent. His rigour and energy will add a lot to our squad, and our fans will love his hunger for victory, which will never stop driving Dani on. By choosing PSG, Daniel has shown everyone the vitality and attractiveness of our project.”

The Belgium international and Alves are likely to battle for the starting role at Parc des Princes, while Serge Aurier is now expected to be granted a move away from the French capital.

It remains to be seen whether PSG pinching Alves from under City’s noses will have repercussions for their potential pursuit of France international defender Eliaquim Mangala.