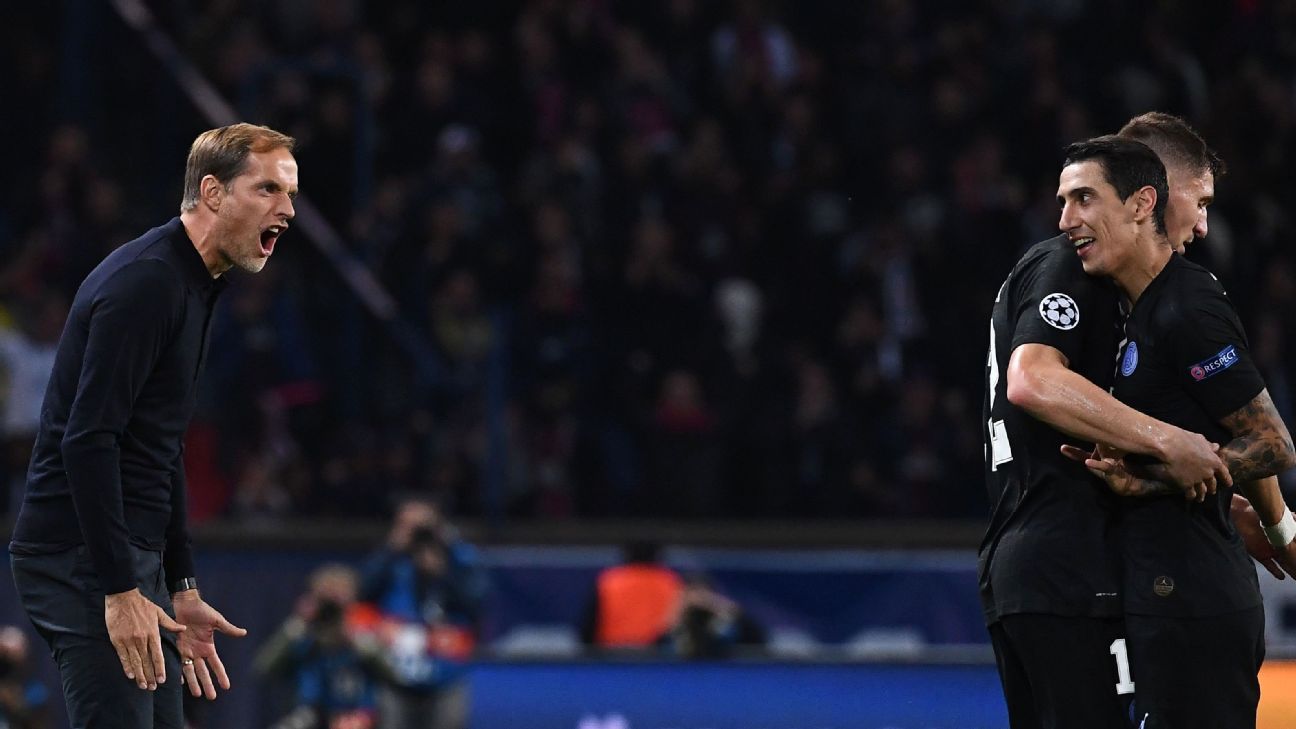 
Paris Saint-Germain coach Thomas Tuchel wants an improved showing from his players when they take on Napoli away in their next Champions League Group C match after Wednesday’s dramatic, but “massively frustrating” 2-2 draw.

The Italian side looked to have won it through Dries Mertens’ second-half strike after Lorenzo Insigne’s opener in the first but Angel Di Maria’s superb leveller in stoppaged and Mario Rui’s own goal saved a point for the Ligue 1 giants.

“I do not know why we cannot play the same way for 90 minutes,” said Tuchel after the match. “We switched to three central defenders and created more chances, pressed better and showed greater intensity, so we won the second half. We did not win overall, though, so we must improve.

“Scoring in the last-minute means that you can look at this as a point won. It was very important not to lose at Parc des Princes here. Our opening 15 minutes were good and then we lost our structure.

“At half-time, I told the players that we needed to play with greater simplicity, faster and with more discipline — we had to improve. It was logical that they scored first but their second goal was massively frustrating. However, we fought back a second time and that shows great mentality.”

The German boss also expressed his belief that PSG can go to Naples and win to improve their current position within the group.

“We are pleased to have finished positively,” said the Argentina international. “We could have lost but we also could have won. You have to fight to the very last second to reach your objectives.

“The coach is there to make decisions and change the formation when needed and that is what he did at half-time. We need to build on the second half and keep improving.”

Right-back Thomas Meunier, who saw his cross turned into his own net by Rui, was harsher in his analysis of PSG’s display and felt that he and his teammates only played for 45 minutes.

“We played a single half of football,” the Belgium international said. “The first 45 minutes did not go according to plan, nor our instructions. In the second, we played the way that PSG have to play — attacking. We saw two of PSG’s faces.

“That said, Napoli were very good, did what they have been doing for years now with few touches, lots of movement and intelligence — they must not be underestimated. They have quality players who could play for PSG or other big clubs.”

Central defender Marquinhos, who was captain in Thiago Silva’s absence and involved in Mertens’ goal to put Napoli 2-1 up, and said that the squad are under no illusions that they face a fight to get out of Group C.

“I think everybody clearly understands the situation,” Silva said. “It was a game of two halves — a poor first and a better second.

“The coach made good changes at the break, which gave us confidence. He moved Thomas and Angel further forward and spoke a lot about the mind. A repeat of the first half was not an option.”

Central midfielder Marco Verratti admitted that Napoli were not easy to play against and expressed his optimism over PSG’s chances of success in Italy in the next round of fixtures.

“It was a complicated match against a good Napoli side,” the Azzurri star said. “They were difficult to play against. We were better in the second half, though.

“We are optimistic for qualification. There are still three matches left. Our group is tough, but we will fight until the end. I know that we can do better, and we will go to Naples to win.”