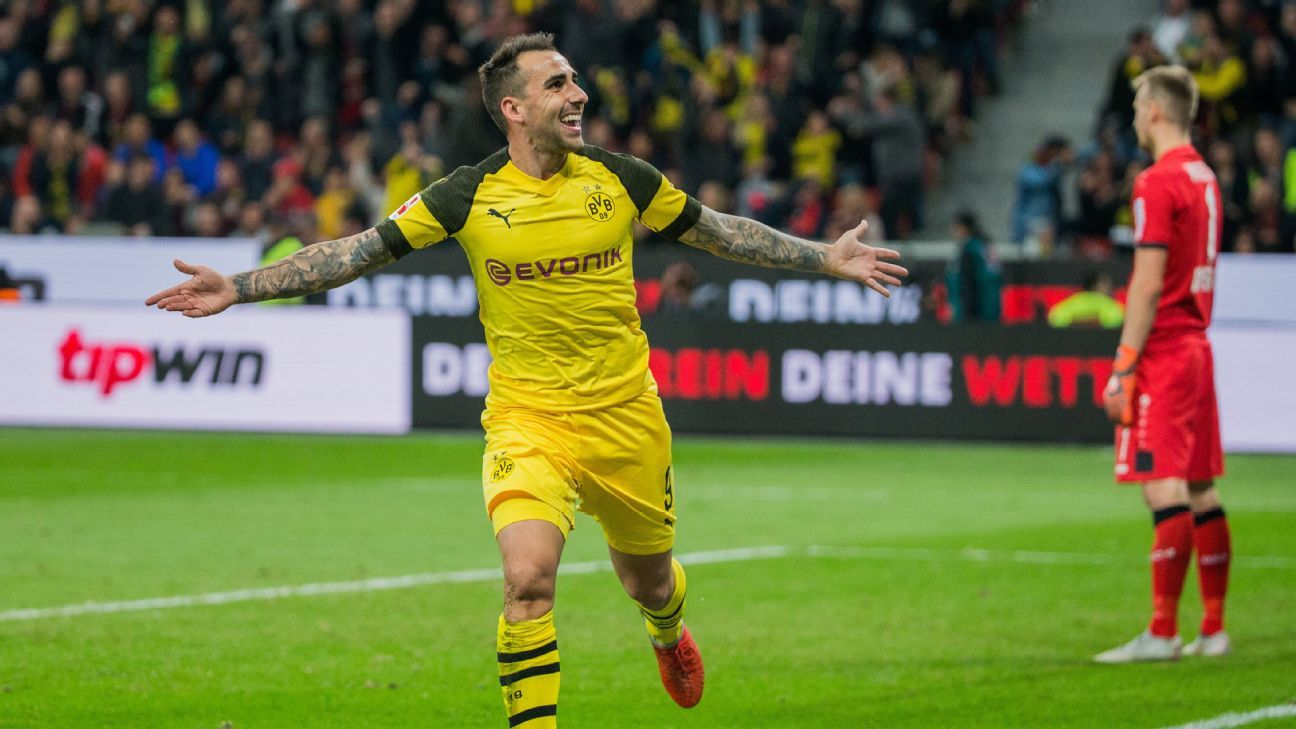 
LEVERKUSEN, Germany — Borussia Dortmund moved into the top of the Bundesliga table after a spectacular 4-2 come-from-behind win against Bayer Leverkusen on Saturday after trailing 2-0 at half-time. They move one point ahead of Bayern Munich, who fell 2-0 at Hertha Berlin on Friday.

After BVB’s 7-0 rout over Nurnberg on Wednesday, the Topspiel against Leverkusen served as a litmus test, and they passed — albeit not with flying colours.

It took nine minutes for the hosts to open their account as Mitchell Weiser perfectly placed a shot from the edge of the box into the bottom corner. Dortmund slowly wrestled back control of the game without actually creating danger in the first half. In the 39th minute, Leverkusen defender Jonathan Tah was in the right place at the right time as BVB failed to clear a corner and slotted home for a 2-0 half-time lead.

Dortmund only started to create chances of their own in the second half but it took until the 65th minute before Jacob Bruun Larsen beat substitute Paco Alcacer to a tap-in. While the game remained on the edge, it was BVB scored the goals. In the 69th minute, Jadon Sancho and Marco Reus combined quicker than Leverkusen defenders could think, let alone move. The captain’s strike was out of reach of Lukas Hradecky.

Dortmund were not done yet, with substitute Alcacer playing an one-two with Achraf Hakimi and poked it home against the inside of the post in the 85th. The Spaniard put the nail in the coffin in the 94th minute, scoring the open-net goal after Hradecky had moved upfield for a desperate last-second set piece.

Dortmund keep coming back in matches and they keep improving within games. In the final 25 minutes, their attack offered far more runs than they did in the first half, rendering BVB’s first act of the game almost as lazy. Yet BVB made the 60-kilometre trip east worth their fans’ while in the second half with super-fast combinations and beautiful goals. Dortmund look like they are on to something, and such a big win could be season-defining. On top of that, they celebrated closely with their fans after the game; building a bond with the fans was one of the proclaimed tasks before the season.

BVB took far too long to get their act together in the match. Lucien Favre is right to experiment with different setups as he fielded a completely new back line with Abdou Diallo as left-back, Dan-Axel Zagadou and Manuel Akanji in the centre and Hakimi as a right-back. The downside is that more often than not, misunderstandings happen.

7 — Favre mended his mistakes with good substitutions, like taking Thomas Delaney off at the break.

GK Roman Burki, 7 — This season, he is “big-save Burki” as he had to come up with three crucial stops to keep his team in the game.

DF Achraf Hakimi, 6 — Hakimi was somewhat underwhelming defensively, but he still tipped the scale in the right direction as his excellent cross created Dortmund’s first and a clever one-two combination with Alcacer meant the all-crucial assist.

DF Manuel Akanji, 6 — For the most part, he had a solid game, but one misplaced pass nearly cost BVB the game, as Kevin Volland hit the post on the ensuing counter.

DF Dan-Axel Zagadou, 7 — Was trusted with another start at centre-back and for the most part did well in building the play from the back. In the 39th minute, however, he took too long to sort his feet and moments later Leverkusen capitalised.

DF Abdou Diallo, 6 — The Frenchman had arguably played well at the left-back position in Mainz, but as he filled in for Marcel Schmelzer, he was not effective.

MF Axel Witsel, 8 — He was a menace in midfield, making all the intelligent plays.

MF Thomas Delaney, 3 — The Danish international looked very bright against Nurenberg when there was no pressure on him, but on Saturday, he faltered completely under Leverkusen’s pressure. His substitution at half-time was the logical thing to do.

MF Jacob Bruun Larsen, 7 — Got the start again after a good midweek showing and was arguably BVB’s most effective player in creating space in the first half.

MF Christian Pulisic, 5 — The lasting memory of Pulisic in this match will be him sitting on the floor with both arms stretched into the air in protest after losing yet another dribble.

MF Marco Reus, 8 — Reus got a 30-minute rest on Wednesday and it helped him to kill Leverkusen once again. He picked up one inadvertent assist and scored the equaliser with a thumping hit.

MF Mahmoud Dahoud, 6 — Dortmund had visibly more punch going forward once Dahoud was introduced. BVB needed a risk taker to make up a two-goal disadvantage — though the 22-year-old nearly cost BVB the game with a sloppy pass in his own half.

FW Paco Alcacer, 9 — Used his intelligence and technique to score a brace, including the open-net dagger. His 30-minute cameo changed the tide in BVB’s favour. Given that he’s just arrived, that is promising.

MF Jadon Sancho, 8 — His impact was more instant than one-minute rice as he assisted BVB’s equaliser with his first move in the game — a spectacular one-two at that. He had the presence of mind to pick out Alcacer in the last relevant play of the game as the net was left vacant by Hradecky after a season.