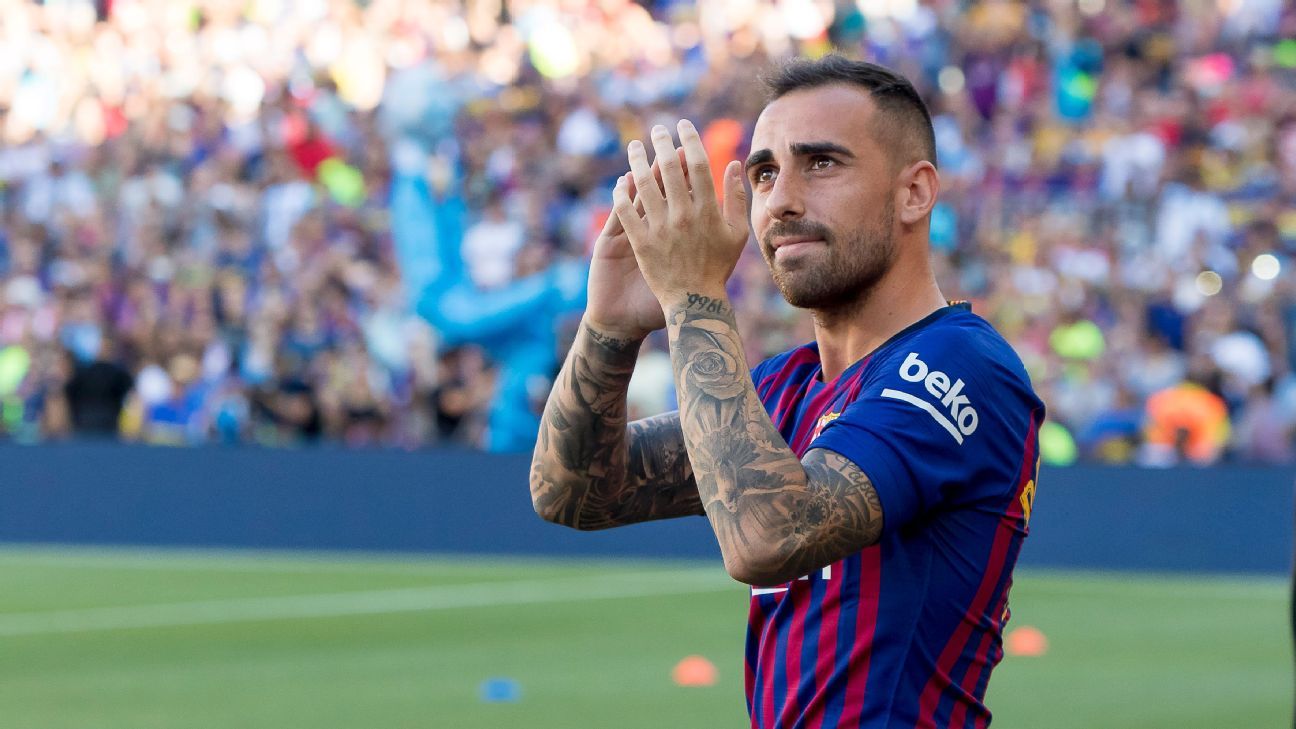 
DORTMUND, Germany — Borussia Dortmund’s exhaustive search for a new centre-forward has finally come to an end with the signing of Paco Alcacer from Barcelona. The 24-year-old joins the German outfit on a one-year loan deal for €2 million that includes a reported €26m buy option.

“About time!” is what many of Dortmund’s faithful will cry. The Ruhr side had thinned their bank balance by spending €73m for centre-back Abdou Diallo and midfielders Thomas Delaney, Axel Witsel and Marius Wolf this summer, while taking surprisingly long to acquire a No.9. It was fair to assume that contingency plans had been in the works to cover the striker position ever since Pierre-Emerick Aubameyang’s deal to Chinese club Tianjin Quanjian collapsed in the summer of 2017. By signing Belgium international Michy Batshuayi on a six-month loan from Chelsea in January, the club bought even more time to find a replacement for the Gabon international, who departed for Arsenal in the meantime.

Signing Alcacer is an opportunistic ploy by the Black and Yellows, who pounced when the former Valencia captain, who joined the Cules in 2016 for €30m as a backup to the trio of Luis Suarez, Lionel Messi and Neymar, had to realise he was no longer in the plans of the Spanish champions at the start of the 2018-19 season.

It still took a full week from the first reports that Dortmund were showing interest until the striker was unveiled at the Westfalenstadion as the club had to convince the 24-year-old, who turns 25 on Thursday, to move to the Ruhr Valley instead of making a move within the Primera Division — just seven months after becoming a dad to a baby girl in February.

In previous weeks, club officials had insisted that they would only add a striker if they were “absolutely convinced” and not just for the sake of it. During a press conference on Dortmund’s annual financial results on Friday, CEO Hans-Joachim Watzke irritated the assembled journalists by making the assertion that the club had only signed Italian striker Ciro Immobile in back in 2014 by caving to the media’s public pressure and was not willing to commit the same mistake again.

Watzke explained that the club would be happy to enter this season with only Marco Reus and Maxi Philipp as options up front; tellingly, 18-year-old striker Alexander Isak went unmentioned, which seems to suggest he isn’t yet an option in the club’s plans. In the same breath, the 59-year-old revealed his agitation over an article of a German newspaper that suggested that a centre-forward had to be at least 1.95 metres tall (6-foot-5). Alcacer, of course, is no Jan Koller with the height of 1.75 metres (5-foot-8). Instead, Dortmund are rather replicating Lucien Favre’s model at Borussia Monchengladbach, where the Swiss coach had success with a duo of flexible “false nines” in Max Kruse and Raffael.

Conveniently, it means that the Ruhr side won’t have to make any adjustments to their current “small-ball” style in order to integrate their new forward and vice versa. Alcacer’s biggest weapon, next to his ability to score goals, is arguably his intelligence on the field. The striker grew up idolising Ronaldo but admits to being closer in style to Raul for his knack of “being in the right place at the right time.”

Alcacer doesn’t have the skill to dribble past several defenders but he uses his ability to read the game by popping up in dangerous spaces with his elusive off-the-ball runs. Meanwhile, his technique helps him to precisely combine with teammates in tight spaces; over time, this should translate to Dortmund boasting a very free-flowing attack when Alcacer leads the line.

Apparently, Favre has arrived at the Westfalenstadion with the intention to become a headache for every Bundesliga side daring to defend with a man-marking scheme. In Sunday’s 4-1 win over Leipzig, the shuffle wasn’t limited to the three-man attack of Reus, Philipp and Christian Pulisic. The consistent midfield trio of Witsel, Delaney and Mahmoud Dahoud was also happy to frequently rotate their positions.

The Spanish international is unlikely to replicate Aubameyang’s stellar rate of scoring 0.74 goals per 90 minutes throughout five Bundesliga campaigns. On the flip side, he will be part of Dortmund’s process of reworking themselves in order to no longer be over-reliant on a single goalscorer. Though naturally, questions will be raised how Alcacer will be able to cope as the “saviour” at Dortmund after playing the role of the bench-warmer for two years in Catalonia.

For what it’s worth, Alcacer has still improved his rate of combined goals and assists with every passing season since his La Liga debut in 2012, despite being often played out of position on the wing in his final year at the Camp Nou. While playing only 693 league minutes in 2017-18, he still mustered 0.86 scorer points per 90 minutes (0.49 goal, 0.3 assist).

With the additional signings of Philippe Coutinho and Ousmane Dembele, this production wasn’t enough to keep Alcacer relevant in the eyes of Ernesto Valverde. For Dortmund, however, that could mean the chance of acquiring a player of international grade that, on paper at least, fits the manager’s style for a (nowadays cheap) transfer fee of under €30m next summer.

But first, the club needs to prove that it was worth the wait and make a seamless integration possible without the luxury of summer preparation and the obstacle of a language barrier.