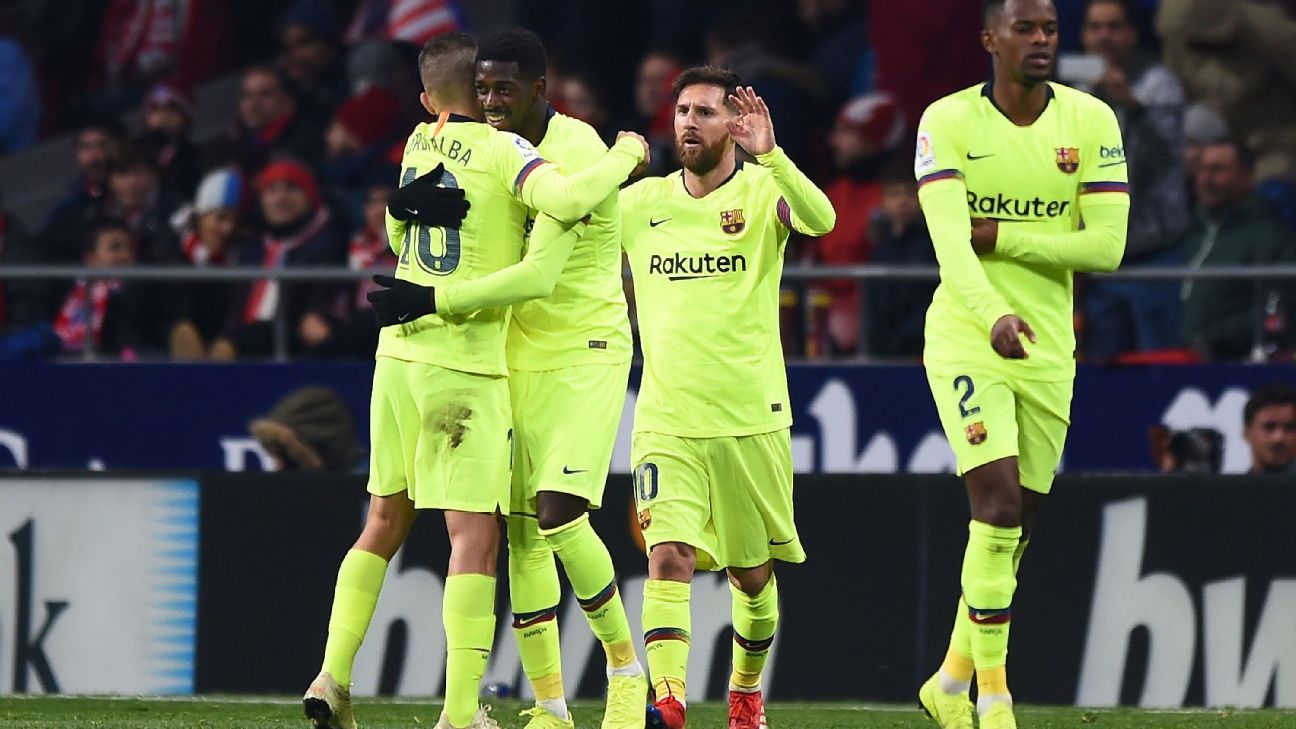 
MADRID — Three points from the Wanda Metropolitano as Atletico Madrid and Barcelona drew 1-1 in a matchup between the top two teams in La Liga.

1. Barca stay on course for the title

Diego Costa’s late header appeared to have swung the La Liga title race Atletico Madrid’s way, but substitute Ousmane Dembele’s even later equaliser keeps Barcelona top of the table in what was a slow burning 1-1 at the Wanda Metropolitano Saturday night.

Barca remain a point ahead of Atletico at the top of the very congested Primera standings, but the draw is really a big psychological blow for Diego Simeone’s side, who missed a huge chance to really prove themselves realistic challengers for the title.

The first half was not a classic. Atletico dangerman Antoine Griezmann broke through a weak Samuel Umtiti challenge at one point, but turned back for support when a shot seemed on. Some space seemed to open up for Barca talisman Lionel Messi, when he caught Atletico midfield Rodrigo dawdling, but Koke was sitting deeper and able to cover.

The biggest moment of drama in the first 45 minutes came when Gerard Pique inadvertently diverted a cross towards his own goal, but Barca goalkeeper Marc-Andre ter Stegen was able to gather comfortably enough. Half-time came without either team having managed a shot on target, a first in any La Liga game so far this season.

The second half did not begin any different, with the defences again on top, and the only excitement coming from some heated challenges, as referee Jesus Gil Manzano started to regularly flash his yellow card.

A dangerous run by Griezmann got the home fans out of their seats, as did a wait for the VAR officials to decide whether Barcelona midfielder Arturo Vidal had deliberately handled the ball in his own penalty area.

But we seemed set for a 0-0 until Costa rose out of nowhere at the back post with just 13 minutes remaining — powering home a header in what was the first effort on target by either team. Barca pretty soon got their first shot on goal, but Atletico keeper Jan Oblak saved Lionel Messi’s free kick pretty comfortably.

Then, just as Atletico were heading top of the table, and Rojiblancos coach Diego Simeone was set for his first win against Barca in 15 La Liga games against Atletico, the equaliser came. Messi teed up Dembele at the back post and the much criticised youngster made no mistake.

Before tonight Costa had not scored in La Liga since February, with his 2018-19 season yet to get going at all thanks to a succession of niggling injury issues and ongoing speculation he was unhappy at the new huge disparity in wages with strike partner Griezmann.

For most of the game Griezmann was Atletico’s most likely source of a goal, with the France international and Ballon d’Or candidate clearly pumped up to impress in the first game since his infamous “decision” not to join Barcelona last summer. On one occasion, Costa could not keep up with his strike partner’s driving run in what seemed like Atletico’s best chance to win the game.

But the Brazil-born Spain international chose his moment perfectly, doing really well to lose his marker and meet Koke’s deep corner with a header which Ter Stegen had no chance of saving. There was real power in the celebration too, and a sense of release for both the player and the whole stadium which has yet to celebrate a big win over either Barca or neighbours Real Madrid.

When Costa was soon taken off, unsurprisingly unable to last the 90 minutes for fitness reasons, it seemed he and his team had taken a massive step forward. It was not to be.

3. Under-fire Dembele to the rescue

Earlier this week Barcelona were thought to be considering selling signing Dembele, a €105 million signing in the summer of 2017, after apparently growing fed up with his lack of professionalism on and off the pitch. But the France international’s late goal on Saturday was his fifth League intervention already in 2018-19 and could be a crucial moment in his team retaining the Liga title.

Dembele started this season looking as if he had finally settled at the Camp Nou, with four goals in his first five games, including match-winning contributions against Sevilla in the Supercopa, plus Real Valladolid and Real Sociedad in La Liga. However, he had netted just once in his past 507 minutes and was dropped by coach Ernesto Valverde against Real Betis before the international break, having gone AWOL the previous week.

Throwing the former Borussia Dortmund player in for the last 10 minutes here, just after Costa had scored, seemed a desperate throw of the dice from the Barca coach. His side had not been playing well, had created very little, and looked set for a deserved defeat. However, Dembele came to the rescue, showing excellent composure after Messi found him in space at the back post to take his time and place a shot beyond Oblak’s huge reach.

Given Real Madrid are surely out of the title race after their latest embarrassment — a 3-0 loss at Eibar earlier on Saturday — Atletico are Barca’s biggest threat to keeping their crown; Dembele’s intervention will have really hurt the hosts.