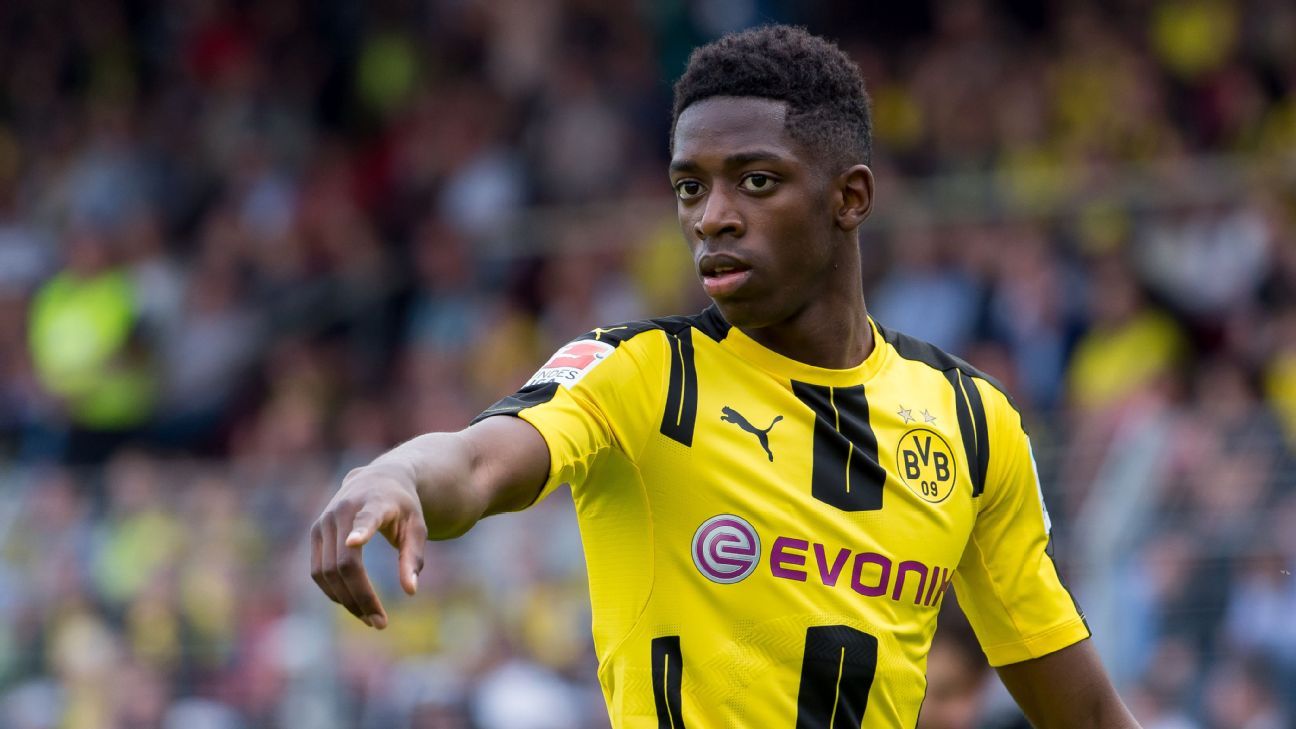 
Barcelona have agreed terms with Borussia Dortmund for the transfer of attacker Ousmane Dembele, subject to the completion of his medical.

Barca will pay an initial fee of €105 million, and Dortmund confirmed that add-ons could see the fee rise by 40 percent — taking the deal to a potential €147m.

France international Dembele, 20, arrives to fill the void left by Neymar’s €222m departure to Paris Saint-Germain, who paid the Brazilian’s full release clause earlier this summer for the largest transfer fee in history.

Barcelona said Dembele’s five-year contract will have a significantly higher release clause of €400m. The club gave him the No. 11 shirt previously worn by Neymar.

The initial €105m fee matches Paul Pogba’s move to Manchester United from Juventus last summer as the second-largest all-time in Euros. There was no mention of add-ons in Pogba’s deal.

“Dembele gives us width, something we lost and we needed,” Barcelona coach Ernesto Valverde said in a news conferece. “He can play left or right, or even through the middle, he is quick and he is technically good. We hope he’s going to add a lot to the team. We’re really excited to have him.”

Asked about the difference between Dembele and Neymar, Valverde said only: “The difference is one if with us and the other isn’t.”

Dortmund suspended Dembele indefinitely earlier this month after he missed training amid interest from Barcelona, but the Bundesliga club continued to insist that he would only be allowed to leave if the La Liga club met their demands.

Barcelona then announced the deal on Twitter on Friday.

A Dortmund statement said a number of steps had to be done before Dembele could officially be considered a Barcelona player.

“The formal handling of the transfer is however still subject to the successful completion of the medical examination of the player at FCB, the player signing a termination agreement with BVB, an agreement on the player’s personal terms with FCB as well as the transfer being matched and authorised in accordance with the provisions of the FIFA Transfer Matching System (FIFA TMS) by Aug. 31st, 2017 (end of FIFA summer 2017 transfer window) at the latest.”

If all goes as planned, the medical will happen on Monday, and Dembele should be able to suit up for Barcelona in their first game following the international break on Sept. 9, at home in La Liga against Espanyol.

Last year, Dortmund saw off competition from clubs including Barcelona, Liverpool, Manchester United, Arsenal and Bayern Munich to sign Dembele from Rennes for a reported €15m fee, so even before bonuses BVB have made back seven times the money they spent last summer.

However, German outlet Kicker has previously reported that Rennes will receive a windfall of €20m from any fee exceeding €80m, and Rennes on Friday made a statement saying the move reflects well on the Ligue 1 club.

“When joining Barcelona, Ousmane Dembele also puts focus on the quality of Rennes’ training,” it read. “Ousmane Dembele took advantage of the ability of the club to make every effort to bring him to his highest level.

“We are particularly proud of the sporting rise of Ousmane Dembele, to whom we sincerely wish the best possible success throughout the course of his career.”

Dembele scored 10 goals and provided 21 assists in the last season but had expressed disappointment at the departure of coach Thomas Tuchel.

“Thomas has always been there for me and taught me a lot,” Dembele told Sky Germany in June. “He’s a very good coach with whom I had a lot of great moments.”

Tuchel primarily used Dembele on the wing but occasionally operated in a more central role to bring an element of surprise to Dortmund’s build-up play, carrying the ball into the final third and creating space.