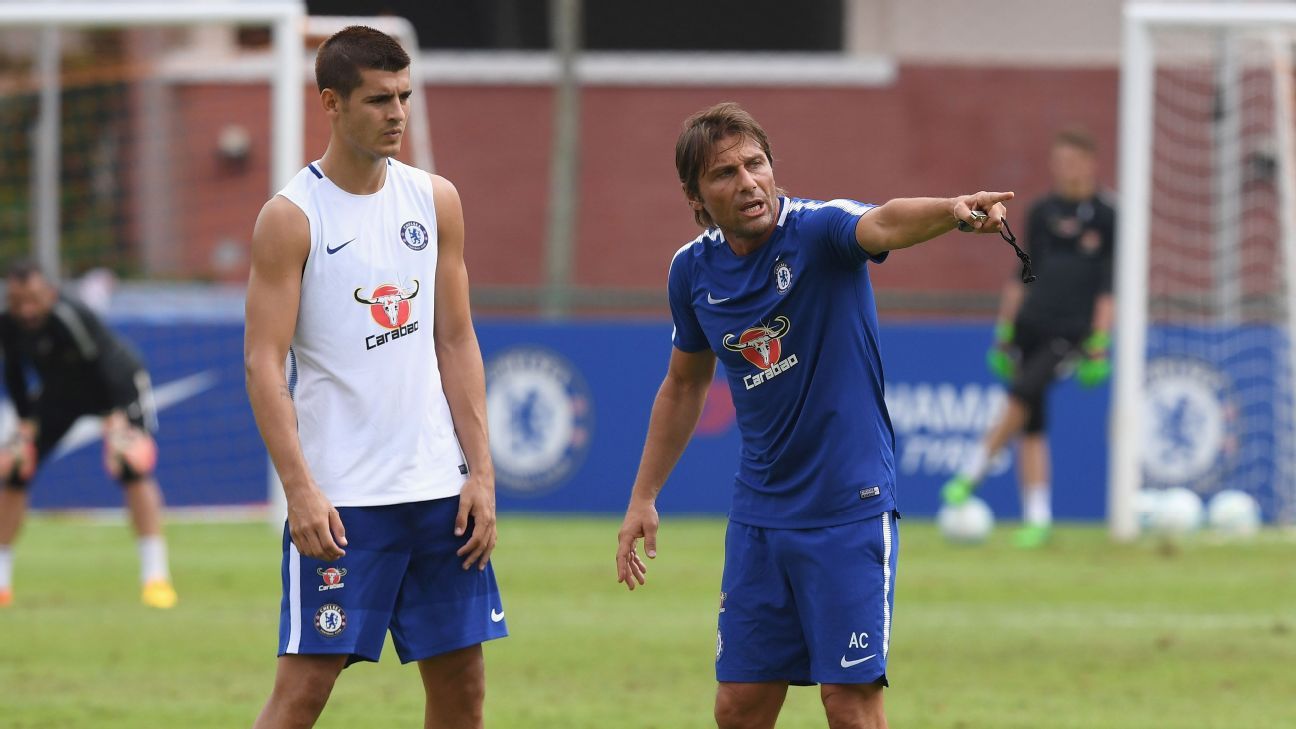 
The new Premier League campaign is finally here, starting with Arsenal’s home meeting with Leicester at the Emirates on Friday evening. But what are the major tactical issues facing the title contenders?

Here’s a run-down of the major question mark about each side’s tactical approach.

The immediate answer to this question is simple: yes. Arsene Wenger’s decision to switch to a three-man defence last season for the first time in over 20 years completely rejuvenated Arsenal’s campaign, prompting their best form of the season and taking them to a confident FA Cup final victory over Chelsea, the side who had initially popularised the system.

But as Antonio Conte has discovered, the effect of this radical formation change can wear off after a couple of months. Chelsea’s form went from (a) completely outplaying opponents and never conceding goals, to (b) conceding almost every week but still winning, to (c) opponents starting to outplay them from autumn until spring. The level of opposition scouting in the Premier League these days means any weaknesses are exploited, and the more games a side plays in a particular system, the easier it is for other managers to find patterns, trends and potential things to exploit.

Arsenal might find their system suffers a similar drop-off in the next couple of months and Wenger may be forced to find yet another formation to keep Arsenal firing.

Chelsea: How will Morata fit into Conte’s plans?

There is no question that Alvaro Morata is a hugely talented striker, with the potential to become the best all-round number nine in European football.

There is, however, a question about how he’ll perform for Chelsea. This is a daunting challenge: Morata has no experience being the outright first-choice centre-forward at a club with everything depending upon him, no experience of the Premier League and no experience of playing as a genuine lone centre-forward, either. Furthermore, Chelsea are not a club accustomed to developing talent, something that requires patience and an understanding that short-term suffering might reap long-term rewards. A few quiet games and Morata will be under pressure.

But the main question is precisely how Conte will ask Morata’s teammates to supply him. Will he be asked to make runs into the channels for through-balls, which is presumably dependent upon Cesc Fabregas playing? Will he be asked to act as more of a penalty box presence to receive crosses from the wingers? Replacing Diego Costa is no easy task; one wonders whether Costa will have found a new club by the end of the month, or whether Conte might end up re-integrating him.

Mohamed Salah is a fine footballer who deserves a second crack at the Premier League. He received few opportunities with Chelsea but excelled with both Fiorentina and Roma in Serie A and seems a fine signing for Liverpool.

However, he’s only likely to be used on the right flank. He’s not particularly effective from the left and certainly isn’t a centre-forward or a midfielder; therefore, Salah only has one role in this Liverpool side. That, however, means Sadio Mane will be forced to switch from his right-sided position to play on the left flank and while there’s no particular reason his runs and finishing won’t be equally effective from that side, it’s not a guaranteed success story.

That, in turn, means Philippe Coutinho (barring a late move to Barcelona) would be dropping back into the midfield zone. This has always seemed the Brazil international’s natural role as he’d be able to pull the strings more effectively in the engine room, but will Jurgen Klopp use Coutinho and Adam Lallana in the same three-man midfield when the latter returns from injury? Will Georginio Wijnaldum fall out of favour despite a good first season? Will Jordan Henderson cope as the sole defensive-minded midfielder behind two outright creators?

While Liverpool’s squad was weak last season, their first XI was fantastically cohesive: it remains to be seen whether the harmony has been preserved.

Man City: How much difference do the new full-backs make?

Manchester City will improve almost automatically thanks to the signing of new goalkeeper Ederson. While he might well take time to adjust to the Premier League, there’s simply no way his save percentage could be as bad as Claudio Bravo’s. Further forward, meanwhile, Bernardo Silva is a tremendous player but it would be a surprise if he provided much that David Silva and Kevin De Bruyne don’t already.

The main source of new quality, then, is unquestionably at full-back, where the elderly quartet of Bacary Sagna, Pablo Zabaleta, Aleksandar Kolarov and Gael Clichy has been replaced by the somewhat expensive trio of Kyle Walker, Benjamin Mendy and Danilo. This surely signifies the fact Guardiola has completely abandoned the “inverted full-back” experiment he was initially so keen on: Walker, in particular, is a pure overlapping speedster rather than a full-back who boasts creativity too.

So what’s the knock-on effect? Presumably the wingers will no longer be asked to stretch the play but instead drift infield, which partly explains why Bernardo Silva has been recruited. Leroy Sane will play the “Pedro Rodriguez” role and run in behind through the channels into scoring positions, but what of Raheem Sterling? City are heavily reliant upon the new full-backs to make an immediate impact.

Nemanja Matic’s transfer from Chelsea to Manchester United was a somewhat unusual switch — it’s unusual to find a player moving between two title challengers. But from Jose Mourinho’s perspective it makes perfect sense — Matic is a solid, reliable operator he’s worked with before.

More crucially, it means United now have a well-balanced midfield trio. Matic offers defensive quality and positive distribution, Ander Herrera offers mobility, tactical intelligence and the odd bit of creative, and those two provide a decent base for Paul Pogba to push further forward, in his best position at the top of a midfield trio.

Pogba now has no excuses for not shining but it remains to be seen whether he steps up. In this new role he must be a constant source of creativity, a genuine scoring threat and someone who repeatedly drives his side forward into attack, converting defence into attack swiftly. A couple of poor decisions in the Super Cup against Real Madrid didn’t bode well but working closely with Romelu Lukaku, whose link-up play has been excellent in preseason, might bring out his best.

Tottenham: How will the Wembley pitch affect their pressing?

Adjusting to a new stadium is never easy and Tottenham are faced with the unusual prospect of having to do so twice in the next two seasons. This time around they’ll be playing at Wembley, a ground where the club has a poor recent record; it doesn’t simply offer different surroundings but also a much larger pitch than Spurs have been accustomed to at White Hart Lane.

This might cause serious problems for a side who have based their strategy (particularly at home) around compressing the play, pressing opponents relentlessly and squeezing as much as possible into the opposition half.

When Harry Kane was asked about the pitch after last weekend’s friendly victory over Juventus, he was very positive. “It was a nice pitch for us — we could spread the play out, make space, we had runners in behind and our defence pushed up and made it difficult for them,” he said. But as defender Jan Vertonghen pointed out, it will be easier with the ball but harder without the ball, and Spurs’ pressing game will surely suffer.