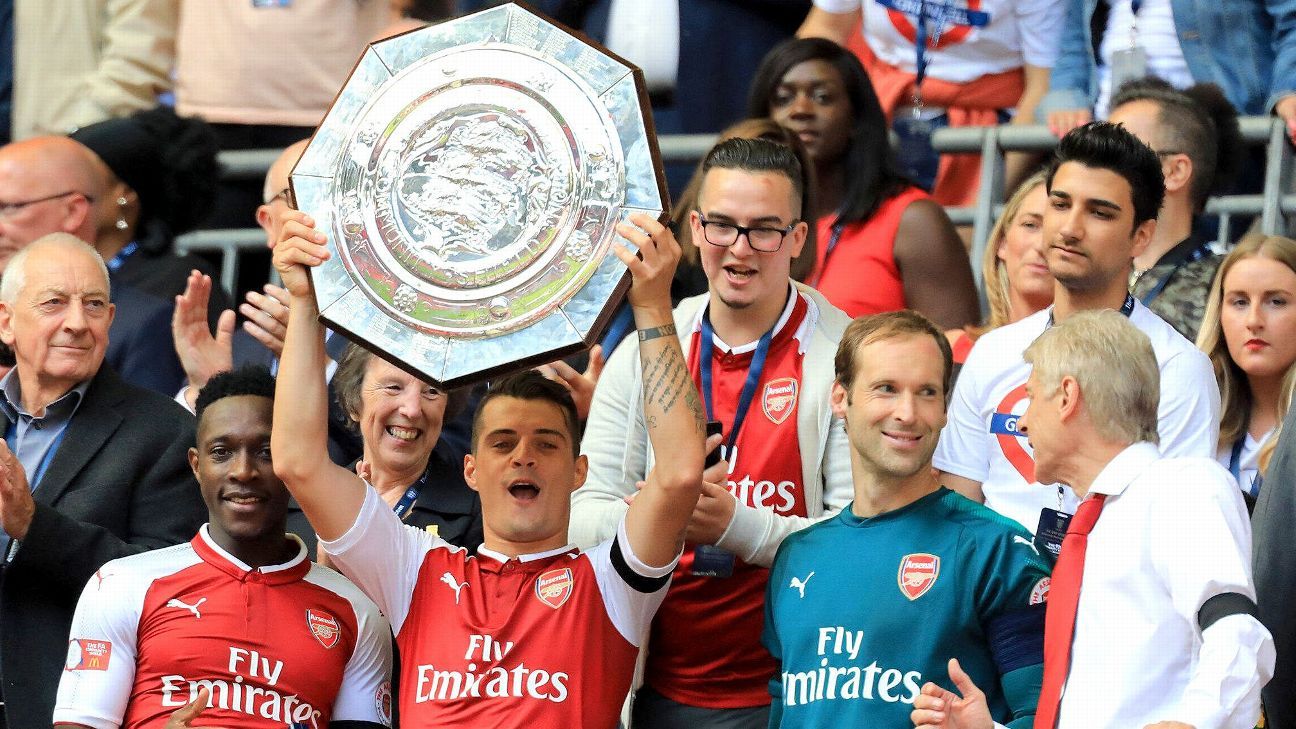 
A new season provides a chance to make a new impression and no Arsenal player looks better primed to do just that than Granit Xhaka. The midfielder became an unwitting figure of fun in 2016-17 but, on the evidence of his man of the match performance in the Community Shield, he is shaping up to be a player of serious consequence in the coming campaign

An admittedly difficult first season at Arsenal led Xhaka to be written off as a monumental waste of money; opposition fans delighted in his struggles and creased up at his succession of red cards for club and country. But last season was not a complete disaster, and the sense of forward propulsion inspired by Arsenal’s change of system in April appears to have endured over the summer.

At Wembley, Xhaka was in imperious form. It was his free kick which Sead Kolasinac headed in for the equaliser, before Arsenal went on to win on penalties. Xhaka also forced Thibaut Courtois into a fine save with a rasping effort from long range. Perhaps more impressively, he completed 87 passes, which was32 more than any other player on the pitch. It was a real statement performance.

In two games at Wembley spread over three months — one, the FA Cup final, bringing last season to a close and another, Sunday’s Community Shield, opening the new campaign — Xhaka has thrived when up against Chelsea’s N’Golo Kante. It is not a circumstantial point. Arsene Wenger’s decision to pursue the Switzerland international instead of Kante last summer was widely ridiculed. As recently as May it was even said to be the single feature which summed up the manager’s decline.

Kante, clearly, had by far the superior season as he swept up the player of the year awards and inspired Chelsea to the title. But in his Wembley endeavours against the Frenchman, Xhaka has noticeably and neatly negotiated the most tenacious of opponents. He is no lost cause. On Sunday, he ran the show.

Xhaka was not the only player to benefit from Arsenal’s change to a three-man defence on April 17, but the Swiss has enjoyed the most successful reinvention. Having a more secure platform behind him and an energetic, box-to-box midfielder alongside him — Aaron Ramsey towards the end of last season and, on Sunday, Mohamed Elneny — has clearly given Xhaka the peace of mind to focus on his responsibilities as Arsenal’s deep-lying playmaker, utilising his impressive range of passing and prompting Arsenal’s attacks.

Last season, Xhaka achieved the seemingly paradoxical feat of being both too slow and too fast: he was too ponderous when he had the ball and too rash when he didn’t. It was a strange dichotomy which seemed to expose some fatal limitations as a player. But in Arsenal’s current system he benefits from having far more security. There is no need for those reckless tackles which so marred his campaign last time out.

Going into the new season, which for Arsenal starts on Friday when they welcome Leicester City to the Emirates, Xhaka looks as though he will be the central lynchpin of Wenger’s team. He will set the tone from deep, and if last season that would have provoked serious concerns amongst Arsenal fans, now he almost transmits a sense of calm. Almost.

Xhaka’s decisive improvement was desperately needed. Over the summer break, the extent of Santi Cazorla’s injury struggles were made apparent. The Spaniard, who has not played since suffering an ankle injury in October, said on the radio in his home country that he does not know when he will play again. “Every day my son asks me if I will play again,” must rank as one of the saddest quotes of the summer.

It was Cazorla who redefined the role of the deep-lying playmaker in a Wenger side when he dropped back from an attacking role and, being brutally honest, Xhaka cannot hope to replicate his influence. They both boast a diverse range of passing weapons in their armoury but what sets Cazorla apart is his technical brilliance and ability to break through the lines with a dribble as much as a perfectly-judged through-ball.

Direct comparisons do not flatter Xhaka greatly and maybe that is one reason so much criticism was directed his way last season. Much of it was deserved. But he is a player of ability and this could be the season to prove it.