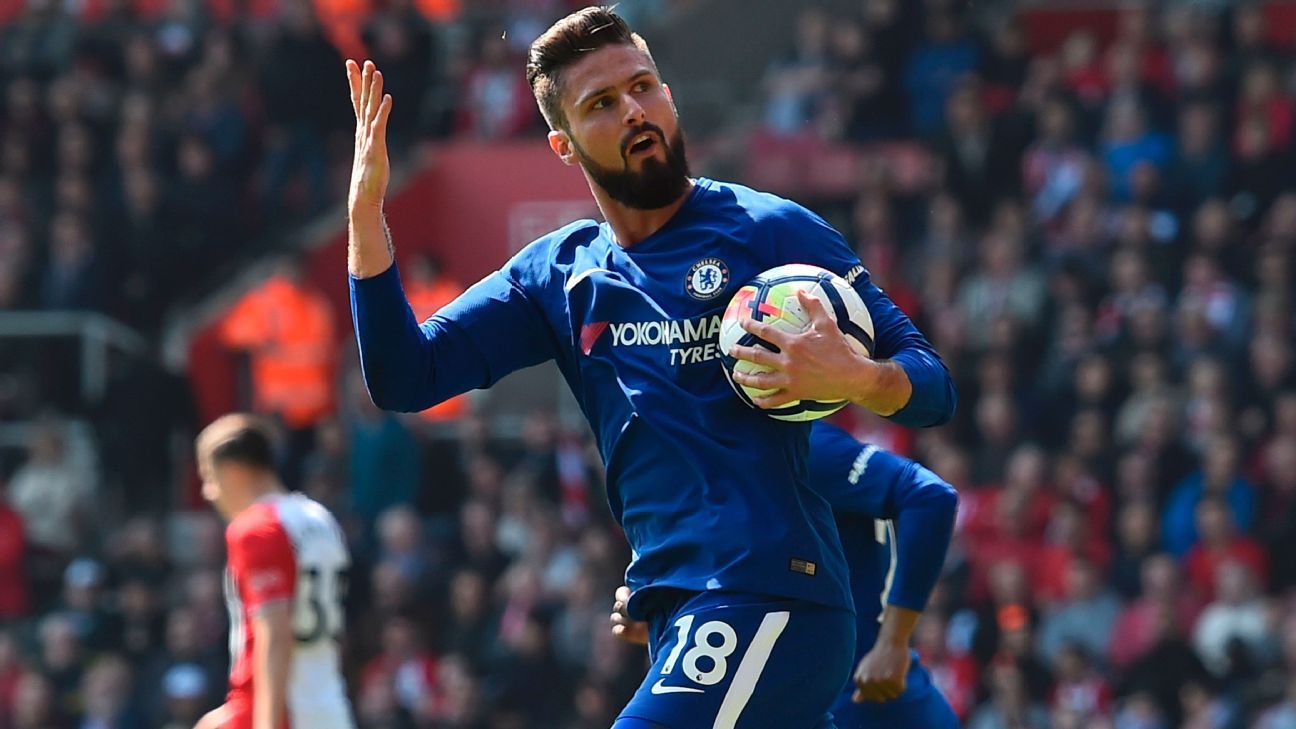 
Chelsea staged a stunning fightback against Southampton on Saturday, coming back from 2-0 down to win 3-2 in a remarkable game at St. Mary’s.

The Saints initially belied their lowly position in the Premier League, taking the game to the Blues in the first half and deservedly going in front through Dusan Tadic.

And when Jan Bednarek doubled their advantage on the hour mark the writing looked to be on the wall for Antonio Conte’s side.

Five minutes later the Blues levelled through Eden Hazard and moments later Giroud netted again to secure what had looked an improbable victory.

There has been plenty of criticism levelled at Chelsea’s players that they lack character, and rightly so if the truth be told. The Blues’ form has been appalling since the turn of the year. At 2-0 down it seemed once again that all was lost, but highly motivated substitute Giroud provided the inspiration to transform the match. With the France international striker leading their line Chelsea looked a potent threat and this has to augur well for their remaining games this season.

Negligent defending and a woeful performance up front from Morata was the root cause of Chelsea’s problems. Giroud is the obvious solution to the Morata problem however Conte has his work cut out to fix a backline that is now without a clean sheet in nine consecutive games.

7 — Conte deserves credit for the double substitution when Chelsea went 2-0 down however it could be argued that he was just rolling the dice when he made the switches and that the Blues should never been in such a parlous position against lowly opponents in the first place.

GK Thibaut Courtois, 7 — Had little chance with the two goals Chelsea conceded but pulled off several stunning saves to keep his side in the game, most noteworthy an acrobatic tip over the bar following a smart effort from Shane Long.

DF Cesar Azpilicueta, 6 — Loved by Blues supporters for his indefatigable endeavours on the pitch, but he looked slightly jaded and found it hard going to keep tabs on Tadic and Long. Commitment could never be faulted, but perhaps a rest is due with Chelsea playing again in midweek before facing the Saints once more at Wembley in the FA Cup next weekend.

DF Andreas Christensen, 5 — Restored to Chelsea’s starting XI by Conte having been dropped for last weekend’s game with West Ham, Christensen struggled to contain Long and put his side under pressure as a result. Had Courtois to thank following an error which allowed the Saints striker a free shot on goal.

DF Gary Cahill, 4 — Ineffective as a defender and captain, Cahill was regularly caught out of position when Southampton advanced and offered little comfort at set pieces. Lacked conviction when Chelsea went 2-0 down and was booked late on for a foolish challenge on Long.

MF Davide Zappacosta, 4 — Spent an hour chasing the shadows of Tadic and Ryan Bertrand before Conte finally saw the error of his ways and replaced him.

MF Marcos Alonso, 6 — Playing in Giroud for Chelsea’s all-important first goal provided a plus to what was overall a disappointing performance. Like Azpilicueta, Alonso looked leggy and he could consider himself fortunate not to have been sent off for a shocking challenge on Long that went unpunished by referee Mike Dean.

MF N’Golo Kante, 6 — Had his work cut out shoring up Chelsea’s midfield and covering for Cesc Fabregas. Another player who perhaps could do with being rested for the midweek trip to Burnley.

FW Willian, 7 — Saw plenty of the ball and looked motivated even when Southampton held the upper hand. Didn’t have any luck with set-pieces but did play Hazard in for Chelsea’s equaliser.

FW Eden Hazard, 7 — A game of two halves for the Belgium international, who cut a peripheral figure for much of the opening hour but came alive when Giroud entered the fray. Took his goal well and it was his poorly cleared cross which fell to Giroud to plunder Chelsea’s winner.

FW Alvaro Morata, 1 — Simply awful performance typified by petulance and wastefulness. Embarrassing, considering he is Chelsea’s record signing. Hauled off on the hour mark, his replacement Giroud wasted no time in staking a claim to be Conte’s go-to striker.

FW Olivier Giroud, 9 — Cometh the hour, cometh the man Giroud. With a swashbuckling man of the match performance from the bench, the 31-year-old’s two-goal salvo spared Chelsea’s blushes and quite probably kept Conte in his job a while longer. A potent reminder of what the Blues have been lacking since Diego Costa left the club.

FW Pedro, 7 — Added much needed energy to Chelsea’s attack. Pace and inventiveness helped swing the game in the Blues’ favour.