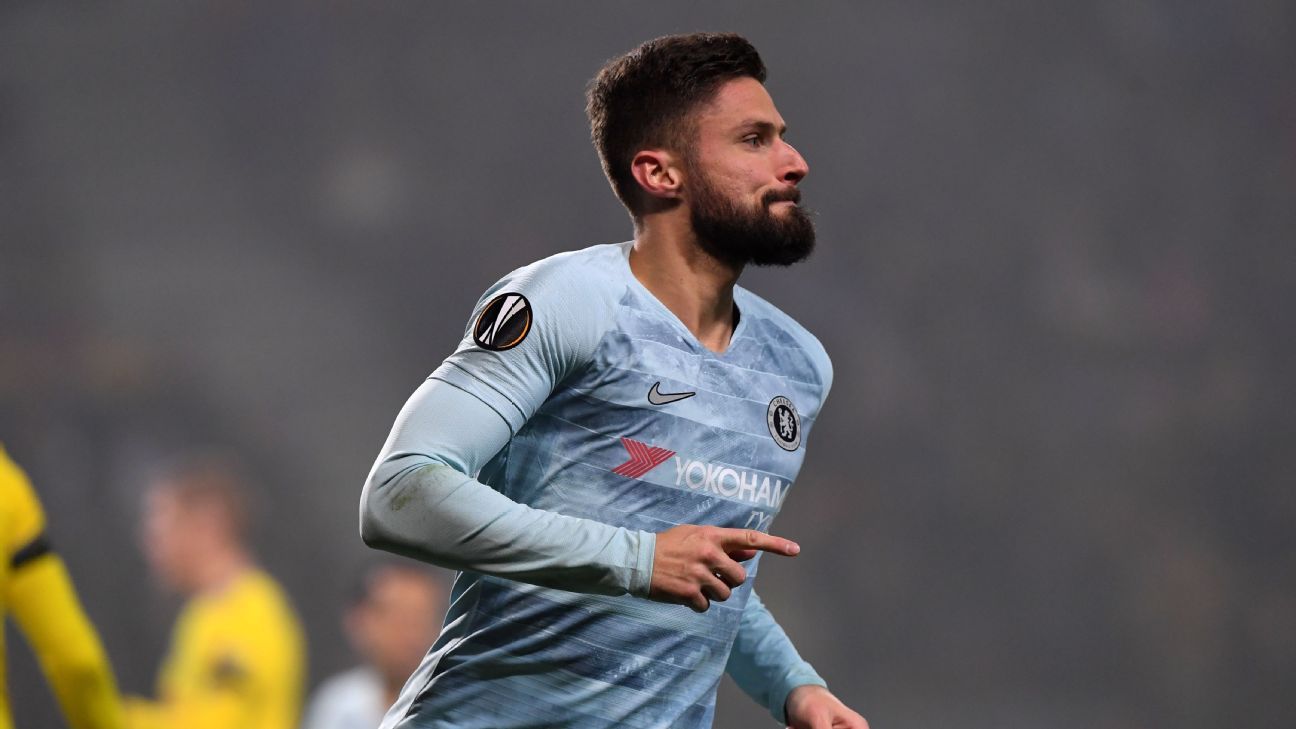 
Chelsea maintained their perfect record in the Europa League group stage with an uninspired 1-0 win over a spirited but limited BATE Borisov side in freezing Belarus, with Olivier Giroud’s first goal of the season proving the difference and star man Eden Hazard playing just over an hour as he steps up his recovery from a back injury.

Chelsea’s place in the Europa League knockout stage is now assured and they rarely had to break a sweat. Giroud finally broke his goal duck and Maurizio Sarri got to rest several key names ahead of Everton on Sunday.

BATE caused Chelsea’s defence far more problems than they should have. You also have to wonder about the load on Jorginho — this was another 90 minutes on what should have been a night off, but for the untimely fever that sidelined Cesc Fabregas.

8 — Sarri oversaw another win and another positive step in Hazard’s managed recovery, which were always the priorities. His starting XI was good enough to do the job, though perhaps not quite good enough to give him any tough decisions ahead of Everton. There were even some minutes for Callum Hudson-Odoi off the bench.

GK Kepa Arrizabalaga, 6 — Watched helpless as Dmitri Baga and Nikolai Signevich crashed efforts off his crossbar early in each half and Evgeni Berezkin hit the post at the death. He watched most of the rest of the game too. One early save from Stanislav Dragun’s header but this was a quiet night between the moments of peril.

DF Davide ‪Zappacosta‬, 6 — BATE’s deep defence limited his attacking threat and his own defensive positioning remains questionable. Did not track Signevich’s diagonal run in the build-up to a gilt-edged Aleksey Rios chance.

DF Andreas Christensen, 6 — Gave the ball away too easily as Chelsea started shakily but was solid thereafter. There remains a sense that he lacks the rhythm and confidence to truly convince Sarri he should be picked ahead of Luiz.

DF Gary Cahill, 6 — Occasionally unsure of himself as the right centre-back to accommodate Christensen, overall his experience and positioning calmed sn at times scrambling defence and helped Chelsea through their stickiest moments.

DF Emerson Palmieri, 7 — His technical ability on the ball worried BATE whenever he pushed forward and his crossing was Chelsea’s likeliest route to goal in an uninspired opening 45 minutes. Early in the second one of his inviting deliveries was decisive. On recent evidence he’s an increasingly viable alternative to Marcos Alonso.

MF Ruben Loftus-Cheek, 6 — Was always going to struggle to match his hat-trick heroics against the same opponents at Stamford Bridge. This was a very different game and at times his close control and decision-making let him down as BATE pressed.

MF Jorginho, 6 — Rarely misplaced a pass, but probably circulated it too slowly in the first half. Quickened things up in the second and one sharp shift out to Emerson created the crossing chance that led to Giroud’s goal.

MF Ross Barkley, 6 — His willingness to shoot from distance was welcome in the face of BATE’s deep defence but, one Denis Shcherbitski save aside, his radar was off. A full 90 minutes here suggests that Mateo Kovacic may start ahead of him against former club Everton on Sunday.

FW Pedro, 6  Will be disappointed that he never found a way to test Shcherbitski but his talent for darting into space is only effective when there is space to dart into. BATE’s caution ensured this wasn’t a night for him.

FW Olivier Giroud, 7 — It’s been a long wait. Having barely had a sniff of a chance in a tepid first half, he met Emerson’s whipped cross powerfully to score his first goal in 795 minutes for Chelsea. It was no less than he deserved for another selfless performance in which he did all the little things.

FW Eden Hazard, 6 — Making his first start in almost three weeks, he understandably lacked a little sharpness, though there were still a couple of neat flicks and jinking runs. Sarri gladly substituted him on 62 minutes once Giroud had broken the deadlock.

FW Willian, 6 — Coasted through the final half-hour of this game, no doubt grateful for being on the bench after starting 11 games in a row across all competitions.

MF Mateo Kovacic, 6 — Used the ball sensibly when he came on without threatening to make a difference to the scoreline.

FW Callum Hudson-Odoi, N/R — Was granted six more senior minutes off the bench but didn’t have much time to make an impact.