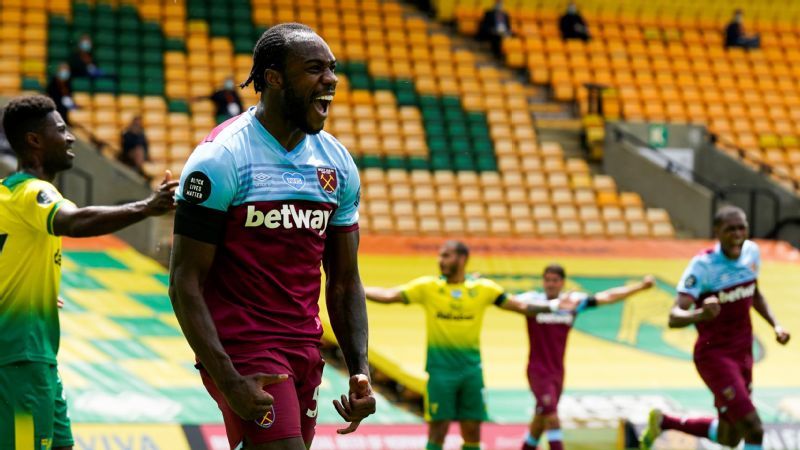 
Norwich City were consigned to relegation from the Premier League after a resounding 4-0 defeat by West Ham United on Saturday with Michail Antonio scoring all the goals for the visitors in a virtuoso performance at Carrow Road.

The result leaves Norwich, relegated from the Premier League for a record fifth time, bottom on 21 points — 13 adrift of 17th-placed Watford who beat Newcastle United 2-1. There are still three rounds of fixtures to play.

“I’m really disappointed for this and for all our supporters,” Norwich manager Daniel Farke said. “We wanted to beat the odds again but when the dust settles the outcome is more or less what was expected.”

West Ham, who are 16th, moved six points clear of the relegation zone and are above Watford on goal difference.

Antonio constantly troubled the Norwich defence with his presence in the box and the 30-year-old struck twice in each half to become the first West Ham player to score four in a league game since 1981, doubling his season’s tally.

“It’s an amazing feeling. When I scored the first two I could see they [Norwich] were quite open so it was a great opportunity,” Antonio told BT Sport.

“This is my first match ball and hopefully I can get some more. It’s been free-flowing attacking football since we came back. The gaffer told me to wait in the box and I’m just pouncing on those opportunities.”

West Ham went in front from a corner after 11 minutes when an unmarked Antonio fired home from point-blank range at the far post after latching on to Issa Diop‘s flicked header. He doubled the lead with a header from another set piece before half time.

Antonio completed his hat trick nine minutes after the restart when he was put through on goal and scored his eighth of the season with another close-range finish in the 74th minute.