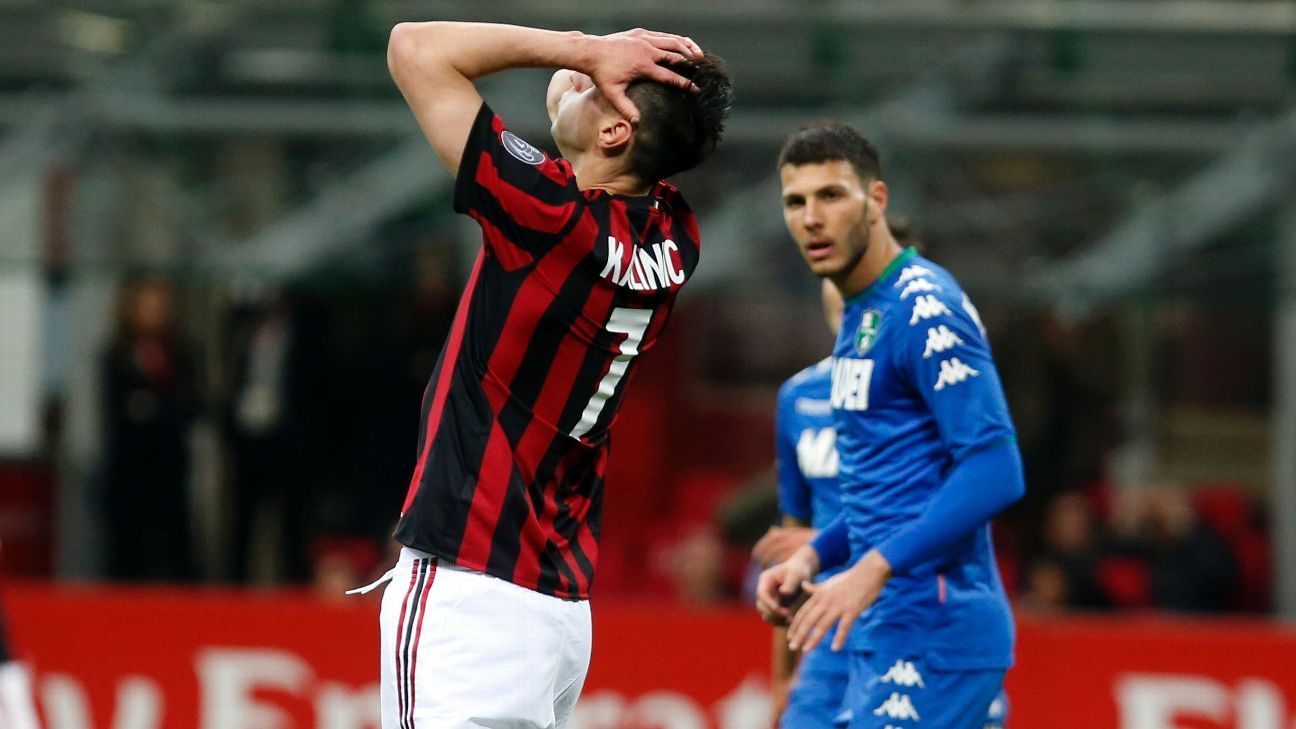 
AC Milan were held to a frustrating 1-1 draw at home by Sassuolo on Sunday night, as they missed an opportunity to gain ground on the top four teams in Serie A.

Nikola Kalinic grabbed a late equaliser, but a wasteful Rossoneri could not capitalize on a dominating performance.

There were aspects of this game where Milan could be pleased with their performance. They were in control throughout, dictated possession, played with a quicker tempo, and was able to win the ball back quickly after losing it.

Ultimately, they didn’t convert all that possession into goals. They wasted chances and key players were indecisive in the final third. It was a frustrating night against an average opponent fighting relegation and the tie could now prove to be costly.

5 — Gennaro Gattuso is still inspiring this side to play with intensity and effort, but that’s not enough. It seemed a silly risk to start Alessio Romagnoli given the strapping on his thigh, while the switch to a back three was a disaster as it had a negative impact on Milan’s performance.

GK Gianluigi Donnarumma, 6 — Can’t be faulted for the goal, as it was a great strike from Matteo Politano. Didn’t have a great deal to do, but produced some decent saves when called upon.

DF Ignazio Abate, 6 — Given he hasn’t played much football in recent weeks, he slotted in at right-back well. Kept things tight defensively and got forward when possible.

DF Leonardo Bonucci, 7 — Suspended for next weekend’s clash with Napoli after being booked for dissent. That aside, the Milan captain produced a solid defensive display even when he had to shift around the backline which didn’t put him off.

DF Alessio Romagnoli, N/A — Lasted just eight minutes before coming off with an injury. As mentioned above, seemed an avoidable risk.

DF Ricardo Rodriguez, 6 — Played well from a defensive perspective, and finally started to show a bit more attacking quality with his deliveries into the box. Milan need to see more of that from him moving forward.

MF Franck Kessie, 5 — Usual positive aspects of his performance, but he’s becoming increasingly frustrating with his lack of progress in the final third. Continues to make wrong decisions in key moments and hasn’t found an end product which could have killed this game early on.

MF Lucas Biglia, 6 — Grew visibly tired in the latter stages and should arguably have been replaced. Through the opening part of the game though, he continued to sweep up in front of the defence and build attacks well.

MF Giacomo Bonaventura, 5 — In comparison to his struggles in recent weeks, this was arguably a step in the right direction. Still had his sloppy moments on the ball, but looked more effective drifting out to the left. Denied a great goal at the end by a brilliant save from Andrea Consigli.

FW Suso, 6 — Had periods in the game where he looked like a real problem for Sassuolo. However, if he’s going to be Milan’s main creative hub — with the number of deliveries into the box he produced and dangerous positions he got into — he has to be better in finding a breakthrough.

FW Patrick Cutrone, 5 — He had a hard time getting involved early on, and although he did come alive, it was always a struggle for him being the lone striker up front. Further, Milan’s way of attacking doesn’t suit him. He makes really clever runs behind the defence, but too often the ball is swung in from out wide.

FW Hakan Calhanoglu, 6 — Continues to get about the pitch and tries to make something happen with his quality distribution. Had a couple decent efforts on goal, but similarly to Bonaventura and Suso, none of the crucial creative trio could make the all-important contribution.

DF Mateo Musacchio, 5 — The centre-half was at fault for the goal as he should have done better to cut off Politano. Made up for it with an assist for the goal, but gradually looked less impressive as the game went on after a bright start.

FW Andre Silva, 5 — Albeit he didn’t really threaten to find a goal, he does add a different dynamic up front. Against a side defending in numbers and with no real emphasis on getting forward, Silva’s creativity and ability to drop deep could have been very useful in a front two.

FW Nikola Kalinic, 6 — Took his goal really well, as it was a great turn and finish from the under-fire Croatian international. However, he also wasted two great headed chances to turn the game completely, and so he hasn’t quite managed to win everyone over just yet.