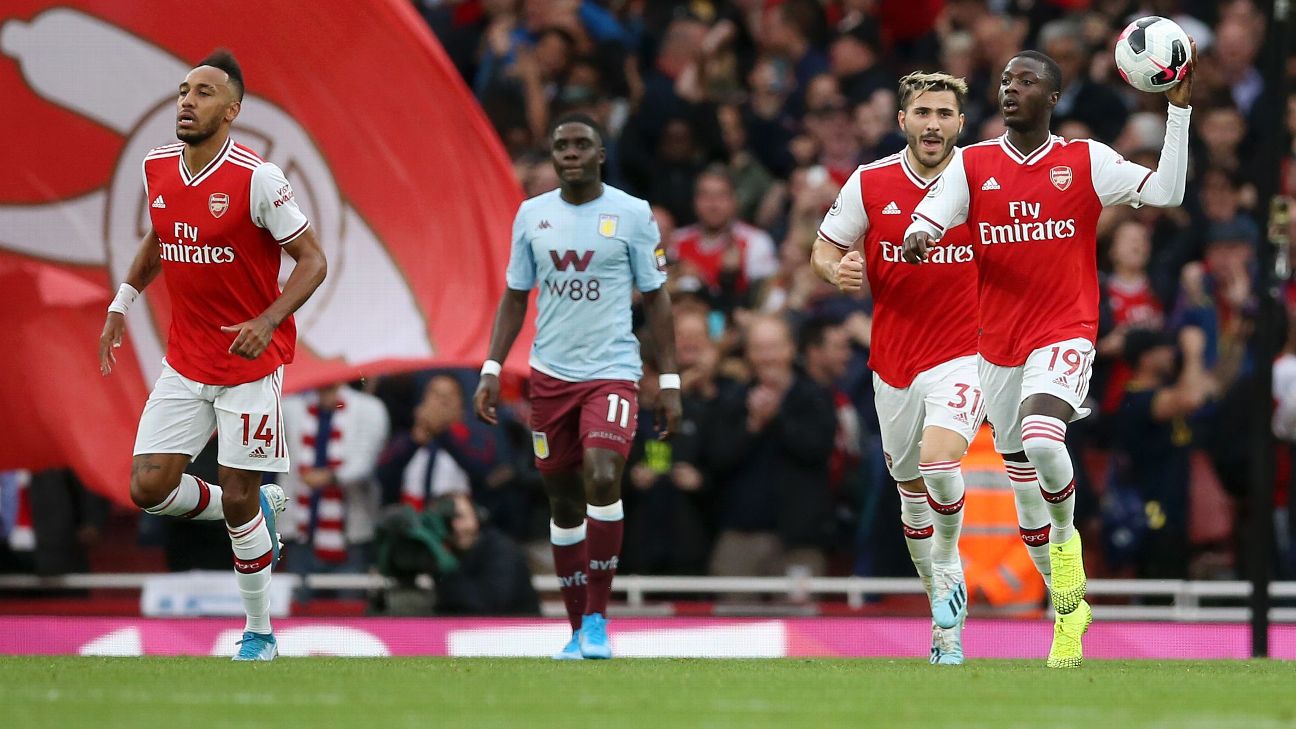 
Arsenal staged a stunning comeback to win 3-2 against an Aston Villa side that will be wondering how they managed to come away from the Emirates Stadium pointless.

The most remarkable part of Arsenal’s win was that they managed it while playing incredibly poorly, and with 10 men. Nicolas Pepe, meanwhile, will be a relieved man after opening his Gunners account from the penalty spot.

Arsenal have defensive work to be getting on with on the training ground; both Aston Villa goals came as a result of extremely passive defending. The Gunners also need more from the likes of Pepe and Dani Ceballos at the other end of the pitch.

5 — Unai Emery does not have many central defensive options, but the pairing of Sokratis Papastathopoulos and David Luiz is not working. Meanwhile, despite the late heroics, questions will be asked as to why Mesut Ozil was left on the bench.

GK Bernd Leno, 6 — Could do nothing about the Villa opener after being hung out to dry by a statuesque backline and was helpless to prevent Wesley making it 2-1 from close range.

DF Ainsley Maitland-Niles, 4 — A nightmare afternoon for the right-back, whose missed chance in the opening two minutes and unconvincing play for Villa’s opener was bookended by two scruffy yellow cards and a sending off before half time.

DF Sokratis Papastathopoulos, 5 — Tried to even the numbers up with embarrassing play-acting during a tussle with Wesley, and was woefully slow when trying to keep up with Jack Grealish in the build-up for Villa’s second.

DF David Luiz, 5 — Another uncomfortable afternoon for the Brazilian defender, highlighted by poor positioning and awareness that allowed Wesley to sneak in for Villa’s second. Luiz forced a good save from Tom Heaton with a trademark free kick in the second half.

DF Sead Kolasinac, 5 — Had a tough time against the powerful running of winger David Trezeguet and needs to do more with his final ball on the overlap, especially with new signing Kieran Tierney edging closer to fitness.

MF Granit Xhaka, 5 — Struggled to move the ball quickly enough to get his side on the front foot and did not do enough to stop the penetrative run of Grealish for Villa’s second.

MF Matteo Guendouzi, 6 — Had a bright start to the game, courtesy of some lovely threaded balls in-behind the defence, but failed to track the arrival of McGinn into the Arsenal penalty area for Villa’s first. A great run led to Arsenal’s penalty; overall, the 20-year-old was his side’s best player.

MF Nicolas Pepe, 6 — Dipped in and out of the game in the first half with the occasional moment of skill, while a well-drilled penalty got his side back on level terms and will do him the world of good. Still needs to deliver a consistent performance over 90 minutes.

MF Dani Ceballos, 5 — Anonymous in the first half when playing in an advanced midfield role, but saw more of the ball in the second when he dropped deeper to protect his backline. A poor day at the office, nevertheless.

MF Bukayo Saka, 6 — Nearly found the net with a stunning strike from the edge of the box and had one or two other promising flashes. Unfortunate to be hooked off at half-time so Calum Chambers could fill the gap left by Maitland-Niles’ red card.

FW Pierre-Emerick Aubameyang, 6 — Arsenal’s main man was starved of service, but turned up when it mattered with a delightful free kick to win the game.

DF Calum Chambers, 6 — Instinctive play saw him poke the ball into the roof of the net to make it 2-2.

MF Lucas Torreira, NR — The Uruguayan midfielder put himself about in a busy last 20 minutes.