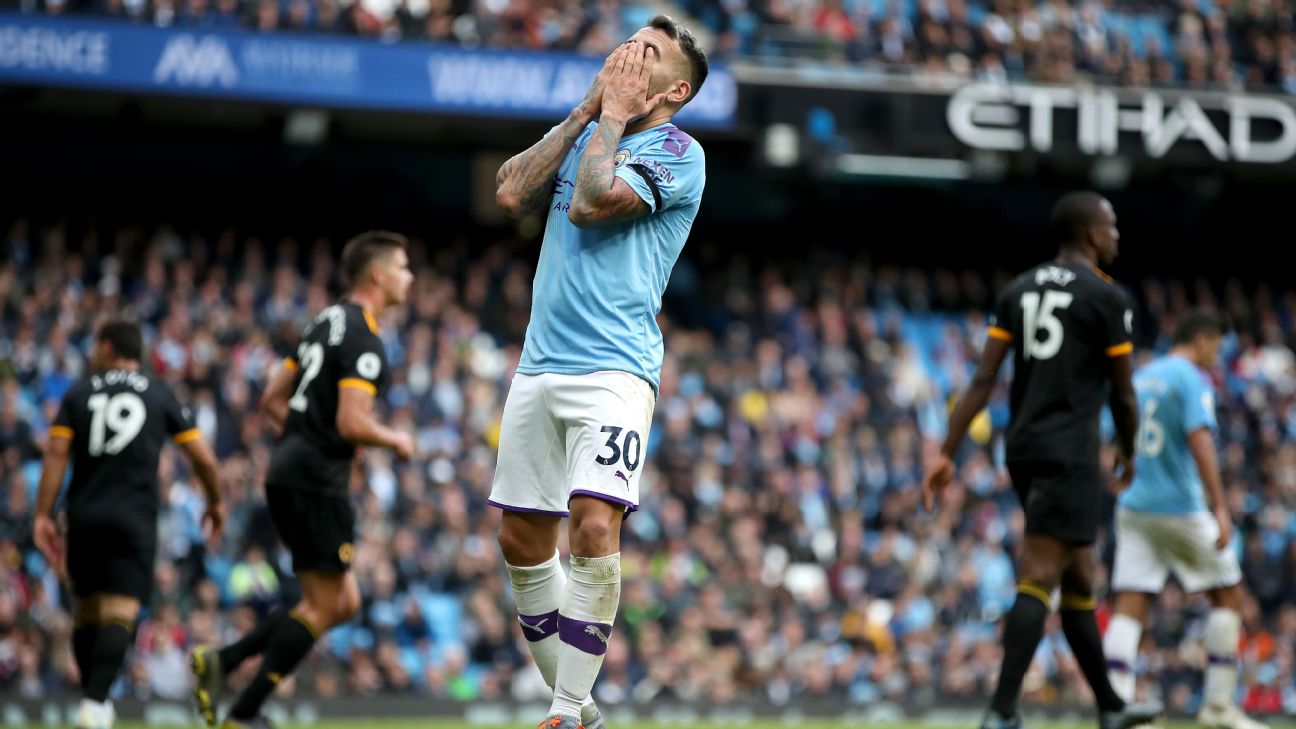 
MANCHESTER, England — Manchester City slipped eight points behind Liverpool in the Premier League title race after a 2-0 defeat to Wolves on Sunday. Adama Traore scored twice in the final 10 minutes to condemn Pep Guardiola’s side to their second defeat of the season and their first at the Etihad Stadium since December.

Wolves had a gruelling Europa League trip to Besiktas in midweek but still found the energy to record their first top-flight win at City for 40 years as the reigning champions failed to score in a home game for the first time in 17 months. Traore got his first on 80 minutes after being played in by Raul Jimenez. Wolves’ second, with almost the last kick of the game, was courtesy of the same combination as Traore held off Fernandinho to score.

City were all over the place at the back in the first half and would have been behind at the break had it not been for Fernandinho. While Nicolas Otamendi was struggling next to him, the Brazilian snuffed out chances for Jimenez and Patrick Cutrone. John Stones is expected back after the international break, but there is an argument that Fernandinho should keep his place in the centre of defence. Defeat here would have been even heavier had it not been for him.

Fernandinho was good, and he had to be because Otamendi was so bad. He gifted two chances to Wolves in the first half and dived in twice on Jimenez — once in the build-up to the first goal — when he should have stayed on his feet. It was the type of performance that makes you understand why City were open to letting him leave in the summer, only changing their mind when Vincent Kompany moved on.

6 — Guardiola was quick to make changes when it wasn’t going his way, but it was a day when nothing seemed to work. Raheem Sterling came off the bench to win the game against Dinamo Zagreb on Tuesday, but the City manager could not repeat the trick. In his defence, he cannot legislate for Otamendi having a nightmare, but Wolves’ game plan worked perfectly.

GK Ederson, 6 — Produced one lovely pass down the right touchline for Sergio Aguero to run onto. Left exposed for both goals.

DF Kyle Walker, 5 — Guilty of giving the ball away in the first half but wasn’t alone in that. Tested Rui Patricio with a low drive from 20 yards that would have crept inside the post.

DF Joao Cancelo, 6 — Making his first Premier League start. Switched from left-back to right-back at half-time. Clever pull back to create a chance for Bernardo Silva.

DF Nicolas Otamendi, 3 — Got away with a lapse that led to a chance for Cutrone and then sent Jimenez through with a loose pass before diving in when Wolves scored their first.

DF Fernandinho, 7 — Wonderful challenge on Jimenez in the area before heading clear Cutrone’s follow-up while he was still on the floor. Had a good game despite the result.

MF Rodri, 5 — The Spaniard did all right in bits but was nowhere to be seen as Wolves scored two late goals with incisive counter-attacks.

MF Ilkay Gundogan, 5 — Struggled to have much impact as Wolves’ midfield of Ruben Neves, Joao Moutinho and Leander Dendoncker shut down any space.

MF David Silva, 6 — Hit the crossbar with a curling free kick from 20 yards after being brought down by Neves. As close as City came to a goal.

FW Raheem Sterling, 6 — Had Patricio diving to his left to palm away his shot after a sharp turn on the edge of the box. Well marshalled by Wolves.

FW Riyad Mahrez, 5 — Starting for the sixth time in eight games. Awful pass into midfield gifted Jimenez a chance in the first half. Replaced early in the second.

FW Sergio Aguero, 5 — A willing runner as always but never got a clear sight of goal. Wasn’t his day at all.

DF Oleksandr Zinchenko, 6 — Made a positive impact after replacing Walker at the half.

FW Bernardo Silva, 5 — Should have scored after replacing Mahrez on the hour mark.