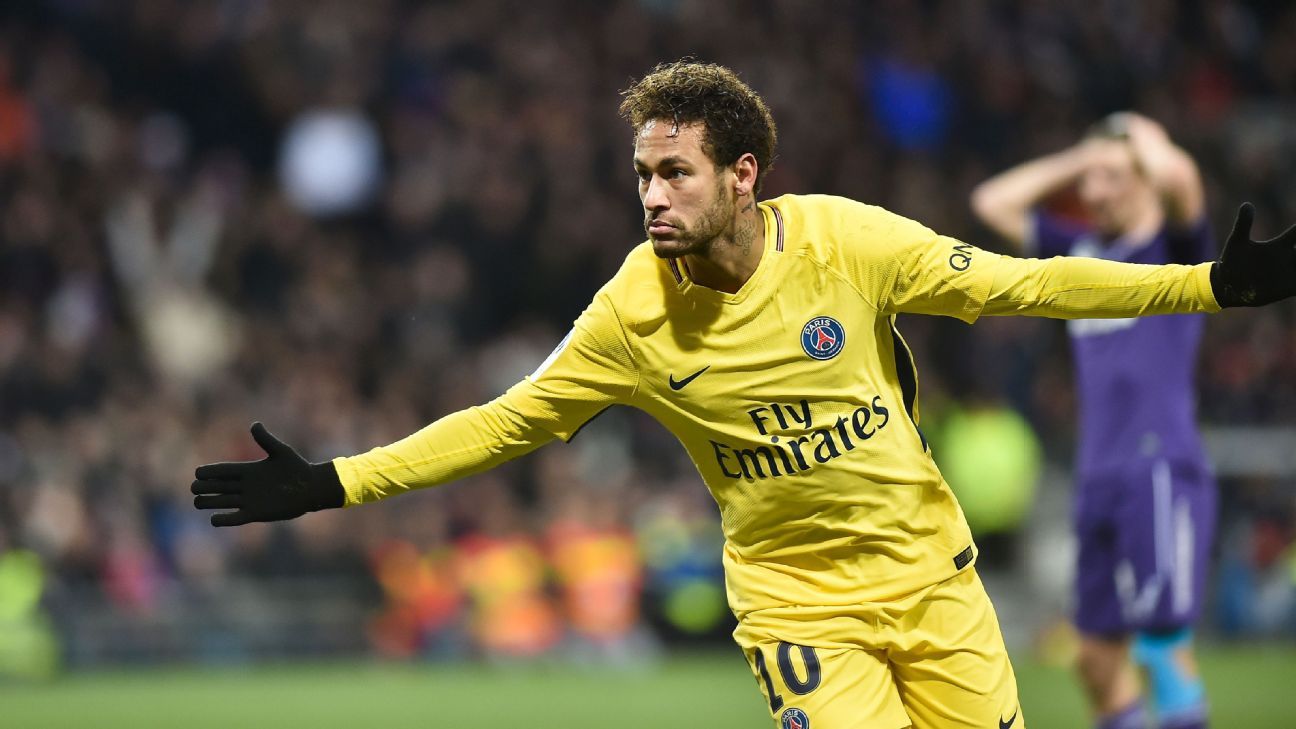 
PARIS — Brazil national team doctor Rodrigo Lasmar has confirmed the worst nightmares of Neymar, Paris Saint-Germain and Brazil with the news that the superstar could miss up to three months of action after undergoing surgery in his homeland this Saturday.

Lasmar said specific recovery time depends on the player, but if the medical expert is right and Les Parisiens‘ No. 10 is out for three months, his debut season with the Ligue 1 leaders is over.

Assuming Neymar’s PSG campaign is done, the former Barcelona man is yet to actually lead his new club to silverware and will miss a probable seventh Championnat crown, potential successes in the Coupe de la Ligue and Coupe de France, as well as possible Champions League glory.

Here is a look back at what could well prove to be the extent of Neymar’s first season with the French giants.

After his arrival from Barcelona for a world record €222 million was confirmed in early August, Neymar was unveiled in spectacular fashion ahead of a 2-0 Ligue 1-opening win over Amiens at Parc des Princes.

Because of a paperwork issue with La Liga, the 26-year-old was unable to make his debut, despite theoretically having signed in time to start.

Instead, Neymar watched Edinson Cavani and Javier Pastore score the goals before the Eiffel Tower lit up to celebrate his arrival.

Neymar’s ineligibility to face Amiens meant that his full PSG debut came away from home and in sleepy Guingamp, of all places.

With the eyes of the world on Stade de Roudourou, the man from Mogi das Cruzes scored one and assisted another as Unai Emery’s men ran out comfortable 3-0 winners.

Later in August, Neymar’s Parc des Princes debut finally arrived against Toulouse, and the South American did not disappoint.

Two goals and two more assists represented an excellent contribution as PSG pummelled their visitors 6-2 with the Brazil international running the show.

The Champions League got underway in September with Kylian Mbappe now onboard and part of the new “MCN” triumvirate along with Neymar and Cavani.

Neymar scored a goal and an assist as the French outfit coasted to an easy 5-0 win at Celtic Park to start their Group B campaign in style.

Emery’s men won 2-0, thanks to a pair of OL own goals, and the Uruguay international missed from the spot after his Brazilian teammate had asked for the ball.

The story would drag on for months and still has not been properly cleared up — as would become clear against Dijon later in the season.

The Champions League came to Parc des Princes before the end of September and a 3-0 win over Bayern Munich to seize control of Group B painted PSG’s European hopes in a positive light.

Neymar scored one and assisted another as the Ligue 1 leaders sent an early message to the rest of the continent.

Le Classique against Marseille at Stade Velodrome rolled around in October, with Neymar expected to star in a Parisien victory.

The ex-Santos phenom did find the back of the net, but also saw red in a 2-2 draw, which was secured by Cavani in heroic circumstances late on.

From Penaltygate with Cavani and rumours suggesting that Neymar and Emery did not see eye-to-eye, it all got a bit too much for Neymar after a 3-1 friendly win over Japan with Brazil and the PSG man was moved to tears during a post-match new conference alongside manager Tite.

PSG registered their first major domestic success of the season towards the end of November, with Neymar scoring a penalty in a 2-1 win away at Monaco.

Unexpectedly, PSG’s unbeaten start to the season across all competitions was brought to a grinding halt away to promoted Strasbourg.

Neymar was booked as he and his teammates went down 2-1 to Le Racing just before a Champions League trip to Munich.

Following their first failure in Strasbourg, PSG were then beaten again — this time by Bayern in Germany.

With Jupp Heynckes leading the hosts instead of Carlo Ancelotti, Neymar was silent in a 3-1 defeat that prompted questions over the French giants’ European ambitions.

A busy start to the new year saw Neymar and PSG in regular domestic action in Ligue 1, the Coupe de la Ligue and the Coupe de France

Neymar scored a penalty in a 2-0 Coupe de la Ligue win at Amiens but courted controversy for celebrating by putting his boot on his head in tribute to a Brazilian friend of his.

The boot stunt was viewed as disrespectful by many.

Neymar electrified Parc des Princes with four goals and two assists in an 8-0 annihilation of Dijon in Ligue 1, which saw the issue of penalties with Cavani brought back to surface.

The Brazilian became only the second player to ever earn a 10 rating from L’Equipe in a league match.

As the busy start to 2018 started to take its toll in January, Neymar was ruled out of PSG’s trip to Lyon through injury and had to watch on as his teammates were beaten 2-1 away in their second Ligue 1 loss of the campaign.

Neymar was branded disrespectful again for his playful behaviour during a 3-2 Coupe de la Ligue win away at Rennes.

He was booked at Roazhon Park at the end of a night of showboating, which also saw him feign to help an opponent up after a foul.

Real Madrid against PSG in the Champions League round of 16 was billed as an example of the sorts of matches that Neymar was brought in to help win.

Despite playing the full 90 minutes at the Santiago Bernabeu and being involved in Adrien Rabiot’s opener, he ultimately faded out of the game and did not have the sort of impact many had predicted he would have on the match.

Neymar will not take part in the return leg and very possibly might not grace the Champions League again until next season and if that is the case, his performances on the big occasions like Bayern and Real away were not of his usual high quality.

Disaster struck last weekend towards the end of a 3-0 Ligue 1 win over Marseille in Le Classique as Neymar went down and stayed down.

He managed an assist but that match will forever be remembered as the moment that his PSG hopes and World Cup dreams started to hang in the balance as it is that injury that now means he must undergo surgery.

It has been an eventful first season with PSG on and off the pitch for Neymar. However, if this proves to be the sum of his debut campaign, it was not what was initially expected when he signed.

There is still time for this to change, but based on Lasmar’s comments, Neymar’s term (club-wise at least) may well be over and he is now in a race against time to make the World Cup in Russia this summer.