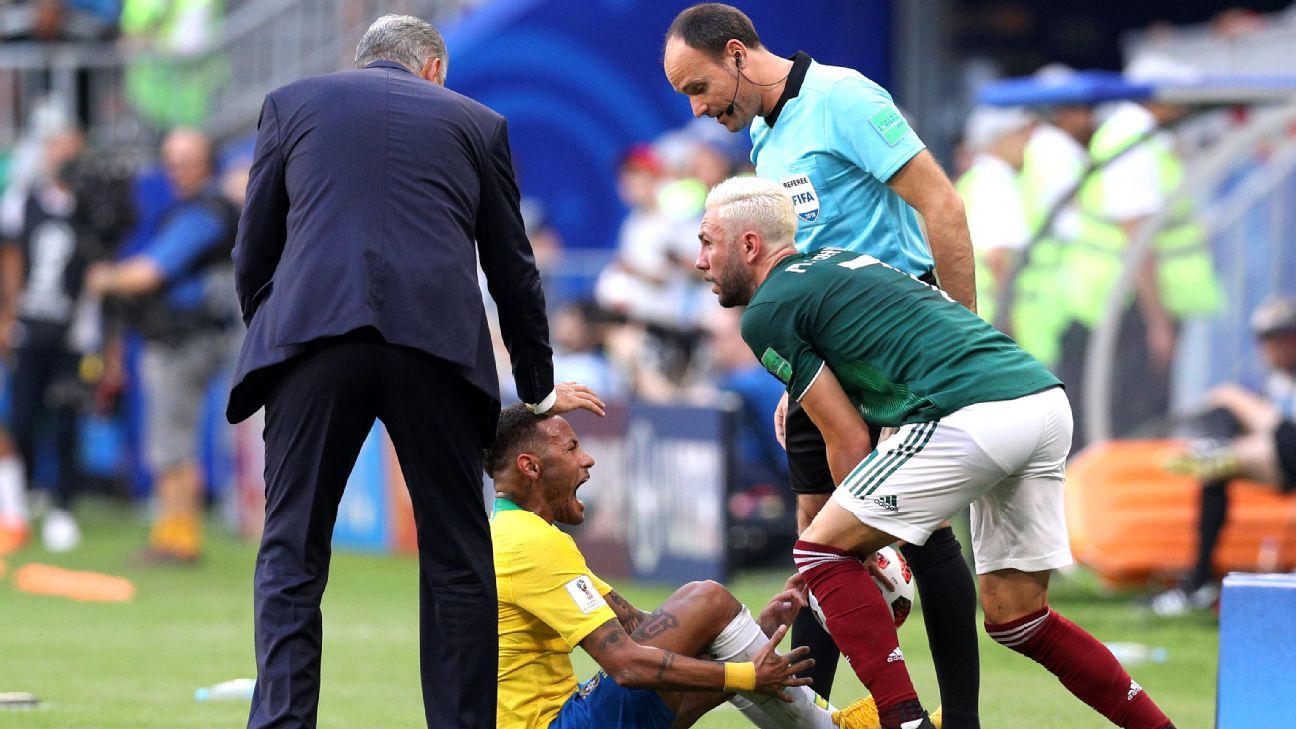 
Mexico coach Juan Carlos Osorio took issue with Neymar’s actions on the sideline in the second half of Brazil’s 2-0 World Cup win on Monday, saying it was “shameful” that officials allowed the game to be delayed so long.

Having already given Brazil a 1-0 lead, Neymar was sitting on the pitch after chasing the ball out of play in the 72nd minute. Mexico’s Miguel Layun approached to grab the ball and, in the process, stood on the superstar’s ankle.

Neymar’s reaction drew criticism as he squirmed on the ground for minutes afterward, only to be able to jog back into action when play resumed.

Osorio said the incident halted Mexico’s momentum as they chased an equalising goal, though he didn’t refer to Neymar by name and refused to when asked directly during his news conference. But he was clearly irate by what he perceived as play-acting from Mexico’s opponents.

“We had control of the match, but to me it is just shameful that so much time could be lost over one player,” the Mexico coach said.

“The delay for one player was even four minutes, and that is a lesson for even children who play. This should be a game of men and not so much clowning around.”

Neymar, who was also the subject of mockery for rolling over an excessive number of times after being fouled during a group-stage draw with Switzerland, insisted that Layun’s action was unsporting.

“They stepped on me; that wasn’t fair. You can’t do that,” the Brazilian star said on TV Globo after the match. “They talked a lot but now they’re going home.”

Brazil coach Tite also defended his player, saying: “Neymar hasn’t done anything. They have stepped on him. He just has to play, when it’s a situation about refereeing that’s [the coaches’] responsibility to talk about it.”

Osorio also criticised Italian referee Gianluca Rocchi for ruling too often for Brazil, though he admitted his team lacked the finishing touch needed to find a goal.

“The game totally favoured Brazil. Too many interventions from the referee,” Osorio said. “I saw a very even match and Mexico had a good game, but we were not effective in the last third of the field.

“Mexico started well. A good start. We didn’t take advantage of the goal opportunities that we created and when you face a team like them, you can’t miss in front of the goal.”

With Mexico eliminated in the round of 16 for the seventh consecutive World Cup, Osorio insisted the national team was still on the right path, though he suggested more Mexicans should play for clubs in Europe.

“I would like to say once again that being able to play at this level against Brazil shows we are a good team,” he said. “We want to keep developing and we hope our players can come to Europe and play [the] best teams in the world. Then our national team will improve.”

Osorio also refused to discuss his future as Mexico coach, indicating it wasn’t an important topic at the moment.

“I think this is an irrelevant thing right now,” he said. “We just lost a very important match, which is painful for all of us. We will need to wait and see. You will see what I decide soon.”

Mexico goalkeeper Guillermo Ochoa finished his World Cup with 20 saves, the most for El Tri at a single tournament since at least 1966, but he wasn’t thinking of statistics after the defeat.

“Well, maybe the personal accomplishment is good, but I cannot be happy about it because Mexico did not advance,” Ochoa told FIFA TV. “The accomplishments of one player are never more important than the entire team.

“I would have loved to have won today. You try to give it your best for the team. Things just did not go Mexico’s way today.”

Information from ESPN FC’s Tom Marshall was used in this report.