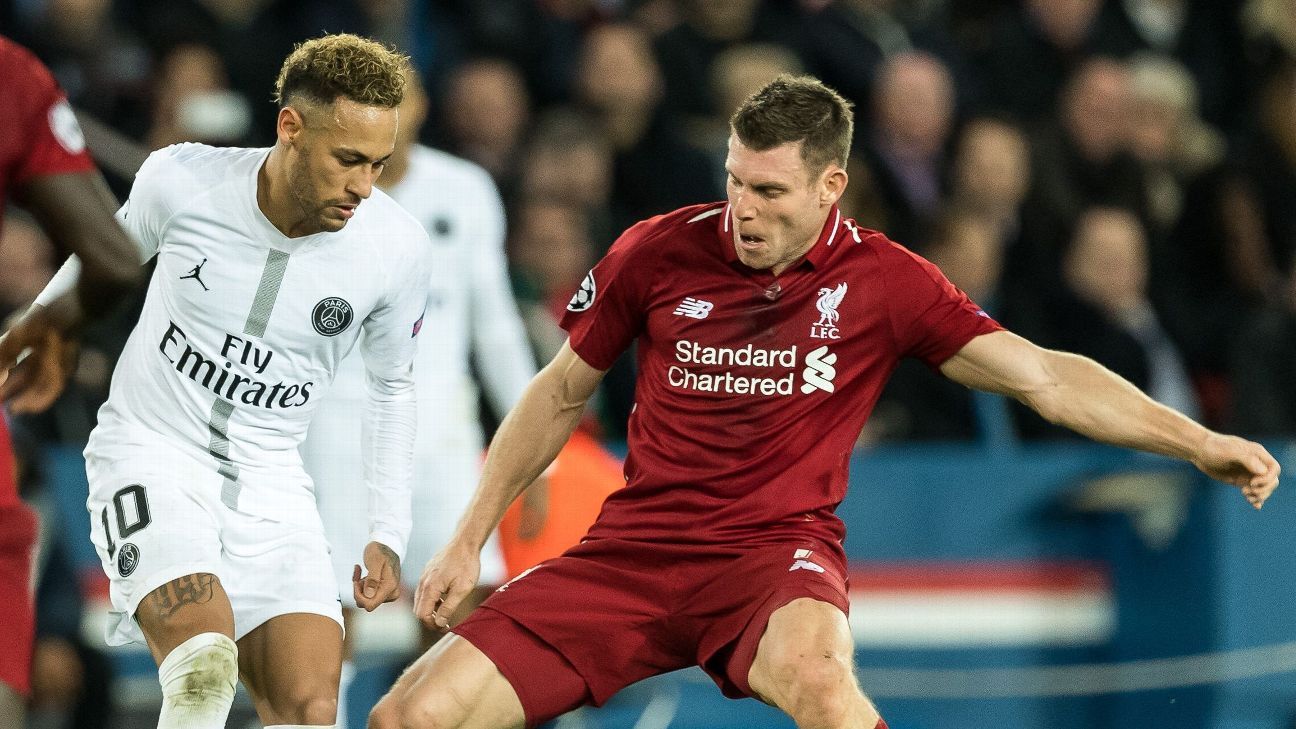 
PARIS, France — James Milner has said it would be “foolish” to be surprised by the controversial performance of Neymar during Liverpool’s Champions League defeat against Paris Saint-Germain.

The Brazil international helped inspire the French champions to a 2-1 win at Parc des Princes with a crucial goal, but while Neymar showcased the positive aspects of his game, he also infuriated Liverpool’s players and coach Jurgen Klopp with his theatrical reaction to challenges.

Klopp said after the game that his team were made to look like “butchers” in Paris due to the number of times Neymar and his teammates were awarded free kicks, but Milner said he was not surprised by Neymar’s performance.

“As a player you can’t just do anything about it can you? It’s then in the referee’s hands to give fouls if he thinks it is a foul.

“As players, you know that in Europe decisions are probably given slightly easier than they are in the Premier League. But that is part of European football. I am used to that now.”

Liverpool’s defeat in Paris, their third successive loss away from Anfield in Group C, has left Klopp’s team needing to beat Napoli at home next month by at least two goals to be certain of qualification for the round-of-16.

Just six months after reaching the Champions League final against Real Madrid in Kiev, Liverpool could find themselves in the Europa League in the second half of the season, but Milner said that the team will not merit a place in the knockout stages if they are unable to defeat Napoli.

“If you can’t win your home games in the Champions League then you don’t deserve to go through,” he said. “I’m not concerned. We’ve played pretty well this season.

“We just need to bounce back. It is what the best teams do. We know it was a tough group all along, the Champions League is tough.

“But to have it in your own hands going into the last game and having a home game — we’d like to have it sewn up by now, sure we would — but I don’t think you can ask for anything else.

“If you had said ‘you have to win your last home game to get through the group,’ I think everyone would have been fine with it.

“It isn’t going to be easy, they [Napoli] are a very good team. But to have the last game at home, if you don’t get the win, you don’t deserve to go through.

“We had a good run last year and that will definitely help us, but we got through in the final group game last year and look where we ended up.

“You don’t see any of the lads panicking. We are comfortable we can go and finish the job at home.”

Despite the threat of dropping into the Europa League, Milner said that the prospect of playing in UEFA’s Thursday night competition has not even been mentioned at Anfield.

“I don’t think that’s crossed anyone’s mind to be honest,” he said. “Our aim is to get out of the group: get the result and get through.

“If we don’t do that, we’ll take whatever happens from there — Europa League or whatever. At this moment in time we’re just focused on getting through the group.”