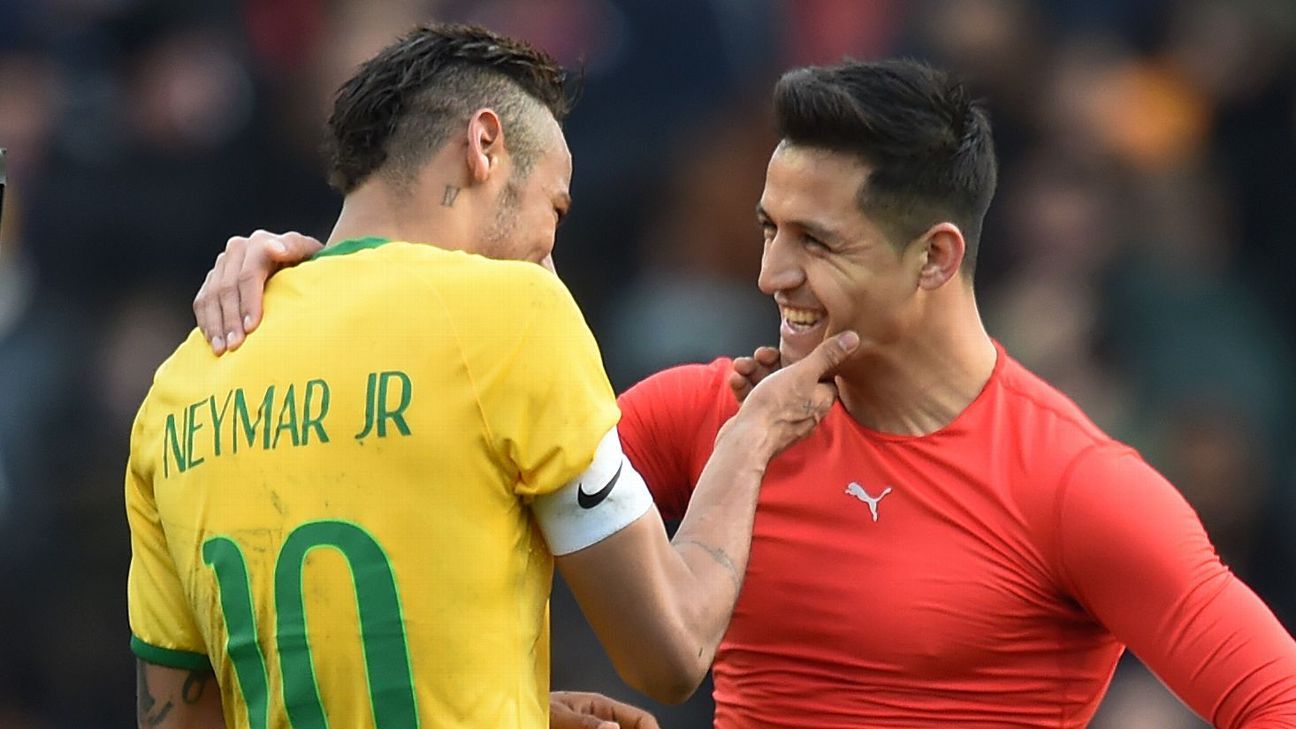 Paris Saint-Germain hope to sneak ahead of Manchester City in the race for Alexis Sanchez in order to fulfill a promise to Neymar, according to the Daily Mail.

The report states that Neymar included Sanchez on his “wish list” when PSG asked what it would take to prize the Brazilian from Barcelona earlier this year.

With his contract set to expire next June, it’s reported that Sanchez could be offered around £300,000 a week to move to Parc des Princes, as well as a £9 million signing-on fee if he agrees a deal in January.

That would leave PSG needing to sell players to balance the books, however, with UEFA already opening a Financial Fair Play investigation into the club’s transfer activity.

Edinson Cavani is thought to lead the list of potential departures, despite patching things up with Neymar over the pair’s penalty dispute, with Julian Draxler another member of the squad deemed surplus to requirements.

Arsenal are planning to sell Theo Walcott and Mesut Ozil in January as Arsene Wenger looks to raise funds to rebuild his squad, according to the Express.

That outlet reports that Walcott has been lined up for a return to Southampton after failing to command a starting spot this season and justify his £110,000-a-week wages.

Inter Milan, West Ham and Everton are other possible destinations, with the Italian side also expressing an interest in Ozil, whose contract expires next summer.

Arsenal are reluctant to lose the German for nothing and will look to recoup some of the £42.5m they shelled out to sign him in 2013.

Daley Blind could be offered an escape route from Manchester United after struggling to hold down a regular place under Jose Mourinho, TalkSport reports.

The Dutchman started the first three games of the season, but has played just a single minute of United’s past four topflight matches, with Mourinho preferring winger Ashley Young at full-back.

According to TalkSport that could see Blind depart for Fenerbahce in January as he searches for first-team football.

He may be tempted by a reunion with Robin van Persie, but it’s likely the Turkish giants will face stiff competition for the 27-year-old’s signature should United agree to let him leave.

It’s possible that too much is being read into this rumour, but Liverpool fans will no doubt be interested in talk of Adrien Rabiot heading to Anfield.

The talented midfielder shone in PSG’s 4-0 thrashing of Barcelona in the Champions League last season — the less said about the second leg, the better — and has started every match in Ligue 1 this year.

It seems unlikely that he would be allowed to leave, but the Daily Mirror claims the 22-year-old’s future is far from certain after he said he would “love” to play in the Premier League and name-dropped Liverpool as a club he used to have a soft spot for.

With Emre Can yet to sign a new contract amid interest from Juventus, Liverpool may need to add an extra midfielder next summer.

– According to the Daily Mail, Liverpool sent scouts to watch Bayer Leverkusen’s teenage sensation Kai Havertz captain Germany’s under-19s against Belarus. The midfielder scored four goals, two from the penalty spot, and set up another as Germany ran out 5-1 winners.

– Former PSG defender Alex has advised Lucas Moura to join Arsenal in January, reports the Daily Mirror. The Brazilian forward has struggled for game time this season and Alex, who also played for Chelsea, believes he would suit the Gunners’ style of football.

– According to the Sun, Real Madrid have been alerted to Harry Kane‘s comments that he wouldn’t rule out a move to Spain. With 11 goals already this season, plus the winner against Slovenia that confirmed England’s World Cup qualification, the striker is certain to be in demand at the end of the campaign.

– Chelsea are refusing to give up on Juventus left-back Alex Sandro, claims the Daily Mail. The Blues made multiple bids for the Brazilian during the summer and will return with another £6£60m offer when the transfer window reopens.

– Arsenal are battling Atletico Madrid to sign Turkey under-19 international Abdulkadir Omur from Trabzonspor, reports the Sun. Omur has impressed since breaking into the first team, claiming two assists in five appearances this season.

– Liverpool and Tottenham are keeping tabs on Inter Milan midfielder Geoffrey Kondogbia, writes the Daily Mail. The 24-year-old is currently on a season-long loan at Valencia, with the Spanish side having the option of pursuing a £22m permanent transfer in the summer.