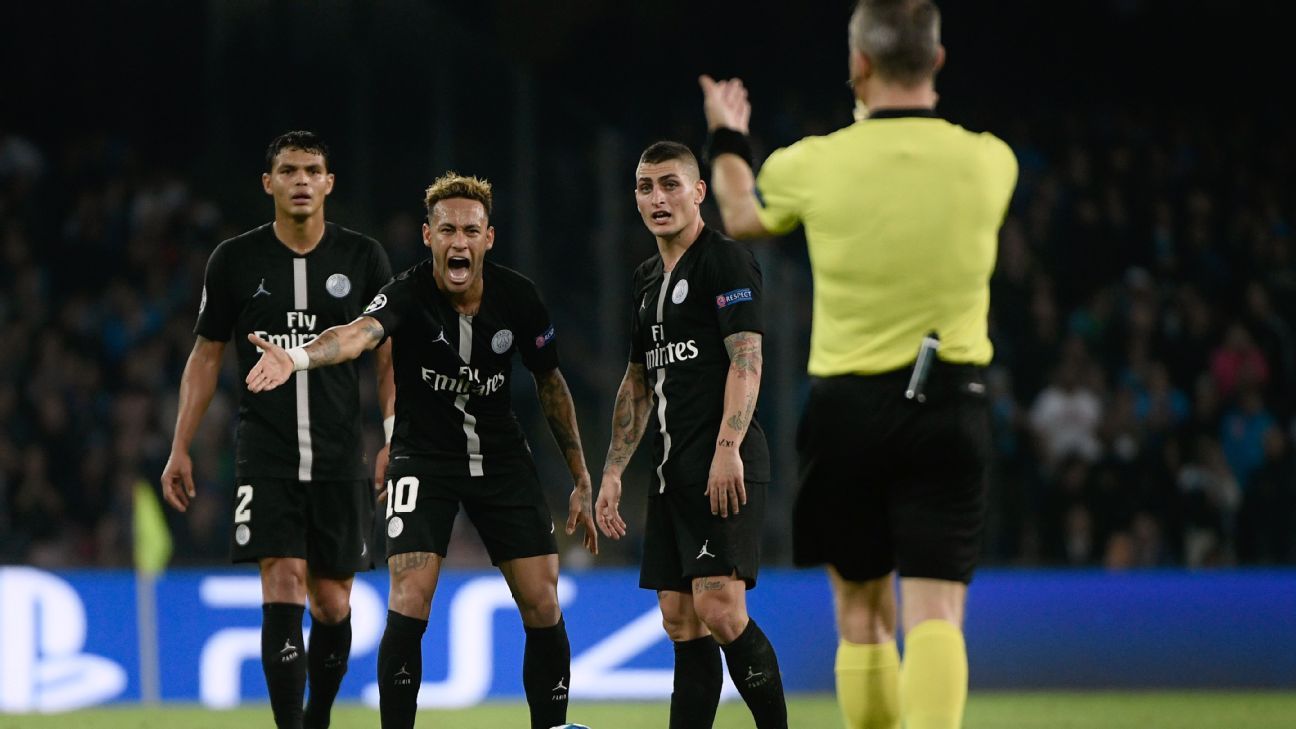 
Paris Saint-Germain’s Neymar has claimed that referee Bjorn Kuipers said something to him that he should not have during Tuesday’s 1-1 Champions League Group C draw with Napoli.

Juan Bernat’s first-half strike was cancelled out by Lorenzo Insigne’s second-half penalty and the Brazil international was subjected to rough treatment from the hosts.

“The referee told me something he should not have,” said Neymar in the Stadio San Paolo mixed zone after the final whistle. “It was disrespectful.

“I do not want to repeat what he said to me. However, somebody high up should do something. He cannot be as disrespectful as he was with me. On the pitch, we are asked to show respect towards the referees. We should get the same in return.”

PSG coach Thomas Tuchel was disappointed that Napoli were granted a point and that Bernat should have been awarded a second-half penalty.

“For Napoli’s goal, there was an offside,” Tuchel said. “After that, there is a penalty for the foul on Juan. These decisions are very difficult to accept. However, that is how it is. We lacked a bit of luck.”

PSG chairman and CEO Nasser Al-Khelaifi went one step further and claimed that the French champions “lost two points because of refereeing errors.”

“I have seen the images and there was an offside in the build-up to Napoli’s goal and we should have had a penalty for the foul on Juan,” Al-Khelaifi said.

“We really need VAR in the Champions League as quickly as possible. We lost two points because of refereeing errors.”

“We are waiting for VAR to arrive in the Champions League,” the Italian goalkeeper said. “With VAR, these errors are impossible.”

Midfielder Julian Draxler also agreed that “there was an offside before Napoli’s penalty” and “there was also a penalty for us that was not given.”

Defender Thilo Kehrer did not want to blame everything on Kuipers but did admit that he felt that decisions went against PSG.

“It is difficult to say whether or not the referee changed the course of the match,” Kehrer said.

“However, it was clear that there were certain situations during the game where the referee could have blown in our favour.

“Unfortunately, the referee decided the way that he did. We have to accept the decisions, but it is tough.”

Meanwhile, captain Thiago Silva has claimed responsibility his role in Napoli’s second-half equaliser and was unsurprised that Kuipers was involved in controversy again after sending Zlatan Ibrahimovic off a few years ago.

“I made a technical mistake,” the Brazilian said. “I wanted to keep hold of the ball, but things did not happen as I imagined in my head.

“I do not know if it was me or Gigi with the foul. In any case, it was an error on my part. I am always motivated by my desire to do the best for my team. However, we must continue, I must continue, and keep my head up.

“On the action where I made my mistake, there is also the question of whether [Jose] Callejon was offside or not.

“However, I think that it was a penalty on Juan at the other end. It is always like that with this referee, though. He sent Ibrahimovic off against Chelsea. We now need to stop thinking about it.”