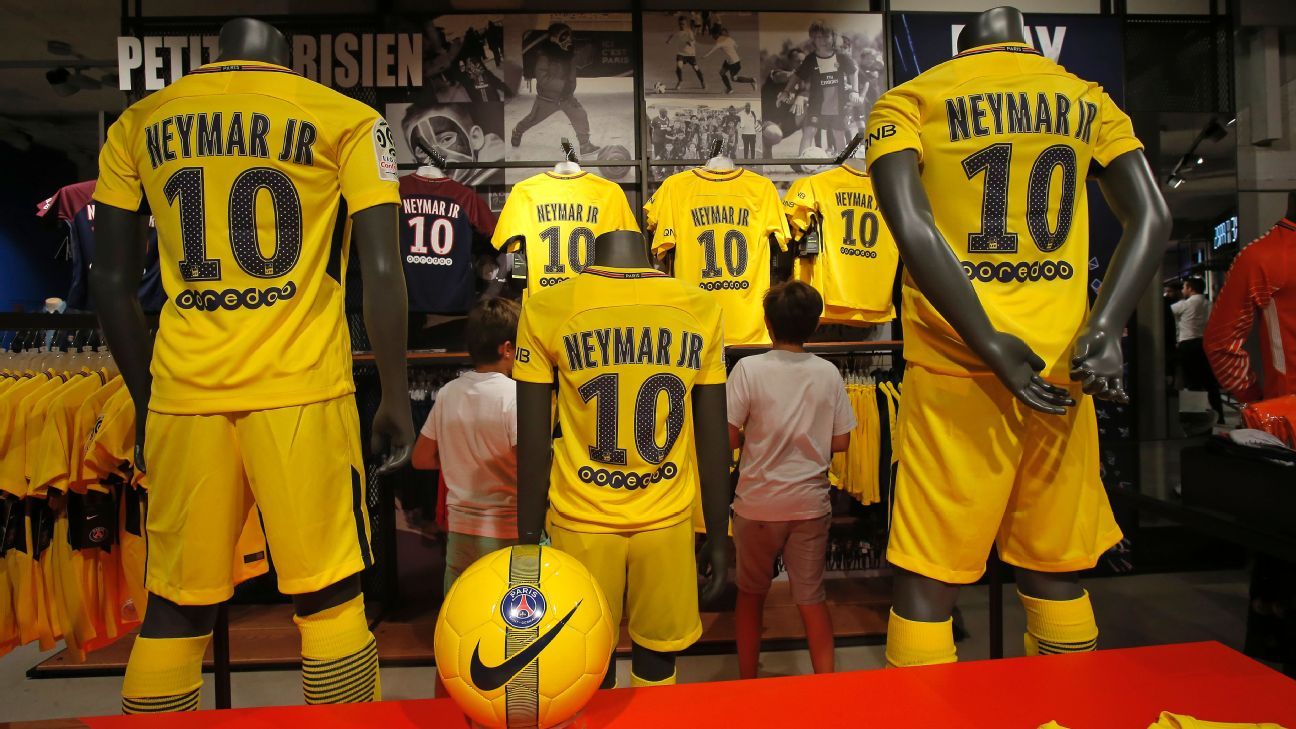 
Barcelona star Neymar has smashed the world transfer record with a €222 million (£198m) move to Paris Saint-Germain, after telling the Spanish club he wants to move.

ESPN FC has been covering the story from the start: here is how it has evolved.

June-July: A summer off

Things began easily enough. Neymar had just enjoyed his “best season” at Barcelona, having signed a five-year contract in October, and he was on his summer holidays. And he certainly seemed to be enjoying himself in the U.S.

July 9: Preparing for next season

Spanish outlet AS reports that PSG are ready to pay €222 million — double the world-record transfer — to sign Neymar, if the player would agree to move to France. Meanwhile, Diario Sport reports Neymar is growing “uncomfortable” at getting second billing behind Lionel Messi at Barcelona.

Barcelona spokesperson Josep Vives later says: “Neymar’s departure is not in the club’s imagination; the club just thinks of keeping the best players like him, one of our main symbols.”

July 18: An agreement is made

A new look for Neymar?

A report in Brazil claims that Neymar is set for a world-record move to PSG. https://t.co/iwqT7ZL15l pic.twitter.com/18sS2vEcKz

A source tells ESPN FC’s PSG correspondent Jonathan Johnson that Neymar has not yet agreed a deal, but serious talks are expected to start soon. The source adds that PSG sporting director Antero Henrique has also restarted dialogue with the representative of Arsenal’s Alexis Sanchez after initially cooling their interest.

ESPN FC’s Julien Laurens joins the FC TV show to explain how PSG are doing everything in their power to sign Neymar.

Barcelona grow tired of the ongoing Neymar speculation and say they will leave a decision on the player’s future up to him and his father, a source close to the Catalan club told ESPN Deportes.

Meanwhile, with the club out in the U.S. on tour at the International Champions Cup, Neymar is the last off the team bus.

Barcelona president Josep Bartomeu then tells The Associated Press: “He is not on the market.”

Javier Mascherano tells ESPN FC in an exclusive interview that he still believes Neymar can be Barcelona’s future.

“There’s nothing for me to tell Neymar, he already knows where he is,” Sergio Busquets tells a news conference. “He can’t be anywhere better. I hope he stays for many years.”

Neymar tells Paris Saint-Germain he wants to move to the Parc des Princes and agreed to terms on a contract, a source close to the French club tells ESPN FC.

“Barca are not going to go without Neymar,” new coach Ernesto Valverde stresses after winning his first game in charge since replacing Luis Enrique at the end of last season. “We want him with us. We know the importance he has not just in our play, but also in the dressing room, where he contributes to the dynamic of the group. We want him with us, that’s clear.”

Neymar the last Barça player to leave, once again without comment pic.twitter.com/vLE7HshgM0

Barcelona defender Gerard Pique posts a Twitter image of himself with Neymar, along with the message “Se queda,” which translates as “he stays.”

However, he reveals later that it was just his intuition that Neymar would remain at Camp Nou, where he has a contract until 2021, and confirms the players are trying to convince him to turn down the French club’s offer.

Barcelona’s next game was against Manchester United and, during a training session before the game, Neymar appeared to have lots to say to his watching father.

Wonder what Neymar and his dad are chatting about pic.twitter.com/gfMZJfTLJ4

Oh, and he scored again as Barcelona won 1-0.

He scores from close range and Barcelona take the lead! 1-0! pic.twitter.com/hhvKaIlJn2

Neymar will not fly back to Barcelona with the squad following Saturday’s Clasico matchup against Real Madrid in Miami, a source tells ESPN’s Jordi Blanco.

According to the source, the Brazil international will head to China to satisfy promotional obligations for Barcelona and Nike directly following the conclusion of the Blaugrana’s International Champions Cup tour of the United States.

Gerard Pique speaks to ESPN’s Hannah Storm about his tweet, and insists that he wants Neymar to stay.

But then, new Barcelona signing Nelson Semedo clatters into the Brazilian in training, causing him to storm off.

Luis Suarez and Andres Iniesta fend off Neymar questions ahead of the Clasico and the player himself remained professional throughout the 3-2 win over Real Madrid, writes Gab Marcotti.

Valverde says after the game: “I try to talk about what is happening right now. Neymar is here with us, we count on him and we think that he should help us out this year.”

Barcelona striker Neymar spends Monday in China on a promotional tour but the rumours really start to fly when he lands in Dubai on the way home.

Various reports followed — some suggesting Neymar’s next destination would be Brazil, others indicating Qatar or Paris — but he lands in Spain on Tuesday night. Catalan television channel TV3 shows images of Neymar walking quickly through Barcelona’s airport while wearing large headphones.

And it would appear that the Brazil superstar is beginning to lose the support of his once-adoring public.

But the next day, it’s official. Neymar wants to leave Barcelona. The forward says goodbye to his teammates, and Barcelona release a statement which reads: “The player Neymar Jr, accompanied by his father and agent, has informed FC Barcelona this morning of his decision to leave the Club in a meeting held at the Club’s offices.

“Faced with this position, the Club has informed them they refer to the buy-out clause of his existing contract which as of 1 July totals 222 million euros which will have to be deposited in its entirety.”

Messi even took to Instagram to say his goodbyes, posting: “It was an enormous pleasure to have shared these years with you Neymar, friend. I wish you a lot of luck in the next stage of your life. See you.”

All that is left is for PSG to stump up the cash. But there is a spanner in the works, as La Liga president Javier Tebas says he is ready to file a complaint about “financial dopers” Paris Saint-Germain to UEFA and the European Union for what he feels are clear breaches of financial fair play over their pursuit of Neymar.

ESPN FC’s Gemma Soler reports from Barcelona as Neymar says goodbye to his Barcelona teammates in preparation for a move to PSG.

Aug. 3: A hitch, before a buyout, then an announcement

The deal is done: Neymar is a Paris Saint-Germain player. The Brazilian international moves to the French capital for a world record fee and has signed a five-year contract.

Earlier on Thursday, a source told ESPN FC that Neymar was due in Paris after undergoing a Paris Saint-Germain medical in Portugal.

But then came a complication when La Liga reportedly rejected PSG’s €222m payment. President Javier Tebas insisted he was ready to file a complaint about “financial dopers” PSG to UEFA and the European Union for what he feels are clear breaches of financial fair play.

However, Barcelona later officially released the Brazilian international after accepting a world-record payment of €222 million that activated his contract’s buyout clause. In a statement, the club said it “will pass on to UEFA the details of the above operation so that they can determine the disciplinary responsibilities that may arise from this case.”

Neymar then announced the reasons why he has chosen to move on.

Looks like something big is going down at Parc des Princes 🤔 #BemvindoNeymarJR #PSG pic.twitter.com/dewyyVZvhx

And, the press conference arrives. Here is Neymar landing at the airport, and then at his new home.

Here are his first quotes: “I am very, very happy. I cannot describe what I am feeling in my heart right now. I am here to help the team to win as many titles as possible. I have come to take on a new challenge and to win titles.

“I have never been motivated by money. It is not my primary concern. I always follow my heart.”

Then Neymar was shown around the PSG pitch. And PSG chairman and CEO Nasser Al-Khelaifi believes the world-record signing of Neymar will prove to be a shrewd investment.

ESPN FC will be speaking to Neymar one-on-one soon.