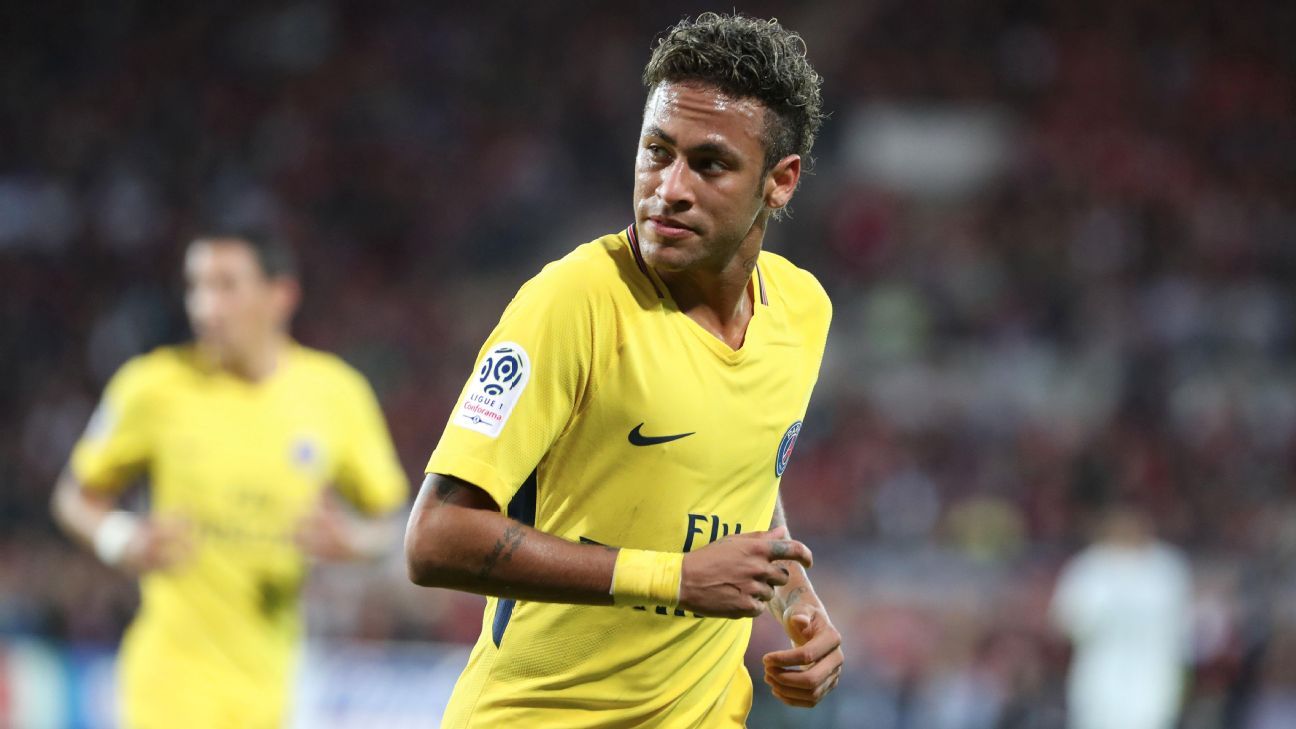 
GUINGAMP, France — The world got its first look at Neymar as a Paris Saint-Germain player in Sunday’s 3-0 win at Guingamp, and the €222 million forward lived up to the hype by scoring one and setting up another at Stade de Roudourou.

Despite appearing to be loosely deployed on the left side of the front three in Unai Emery’s 4-3-3 formation, it quickly became obvious that the Brazil international was occupying the same free attacking role that he does with his national team.

Neymar drifted inside, dropped deep and even came to the right side in his first 30 minutes of Ligue 1 action and his new teammates immediately looked to get the ball to him at every possible opportunity.

After a series of largely unsuccessful dribbles, some flashy but ultimately fruitless tricks and flicks, as well as some intricate short passes in the build-up to some chances, the 25-year-old started to grow into the match.

Neymar was already one of the game’s main protagonists by the time referee Antony Gautier blew the half-time whistle.

First of all, Neymar dug out an inch-perfect, right-footed cross, which found compatriot Marquinhos towards the back post. The defender met the ball with a clean diving header but he was just unable to loop it over Guingamp goalkeeper Karl-Johan Johnsson and it hit the crossbar instead.

He was motoring by this point and he located marauding right-back Dani Alves with a sensational penetrating through-ball to open up Antoine Kombouare’s men at the back. Unfortunately for Neymar, Alves was unable to bring the ball under control to deliver the cross and the chance passed.

He was involved again before half-time, though, when his jinking run into the Guingamp penalty area ended with Etienne Didot snuffing out the danger. Neymar’s spot-kick claims fell on deaf ears but the momentum was already with him.

Seven minutes into the second half, he made his first telling contribution. Searching for Edinson Cavani, a duo that is already showing signs of promise, his pass was redirected to former PSG youth team player Jordan Ikoko by Pedro Rebocho. Between them, Ikoko and goalkeeper Johnsson conspired to gift Les Parisiens the opening goal in farcical style and, despite the fortuitous nature of the breakthrough, the visitors never looked back from there.

Once in front, Neymar became the focal point for the team and another pinpoint through ball — similar to the one Alves failed to control in the first half — produced the second goal 10 minutes later.

Cavani was played into acres of space and the Uruguay international showed composure and made no mistake from the edge of the penalty area.

It was Cavani’s turn to repay the compliment to Neymar eight minutes from full-time.

A Layvin Kurzawa cross was dealt with by Rebocho with Neymar threatening to get his head on it but, when Cavani collected the loose ball and took it past Christophe Kerbrat, the former Barcelona man positioned himself well for his fellow South American to pick him out with a prodded pass that took Ikoko and Johnsson out of the equation.

All Neymar had to do was redirect Cavani’s pass into the roof of the Guingamp net, and he had his first goal in PSG colours.

One more mazy run culminated in a looping ball in that, thankfully for the home side, landed on the roof of the net and Neymar’s first 90 minutes in Ligue 1 were over.

Speaking in the mixed zone after his first steps in French football, Neymar declared himself pleased with his maiden outing.

“I am happy with my first match but the main thing was getting the win,” he told reporters. “It was a good game and we scored some goals, so we are satisfied with what we did.

“We found each other well on the pitch and we will continue to get to know each other. There are a lot of top players here — this is a beautiful team.

“My goal? It is always important to score and I hope that I will score more.”

Neymar’s partnership with Cavani was particularly promising and PSG’s No. 10 believes they will continue to improve.

“My relationship with Edinson? I knew that he was a craque [top player] and that we would understand each other well,” Neymar said. “We are still getting to know each other but it is easy to play with him and Angel [Di Maria]. We will continue to get better.”

Whether that is PSG’s long-term front three is open to debate, with DI Maria again putting in a below-par performance. Javier Pastore and Julian Draxler are waiting in the wings for their chance to impress.

However, Neymar’s first outing with PSG went very well and the early signs are that there will be few — if any — teething problems for the most expensive player in the world at Parc des Princes.