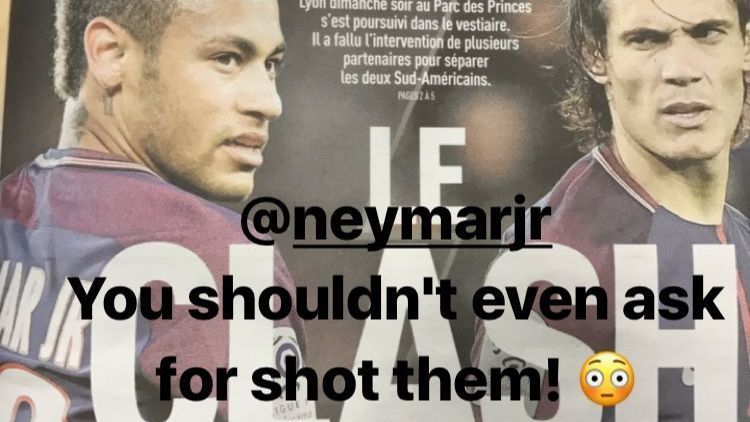 Neymar is demanding that Paris Saint-Germain sell Edinson Cavani after their row against Lyon on Sunday, Spanish newspaper Sport has claimed.

Cavani and Neymar argued over who would take a free kick and a penalty during the match, with PSG boss Unai Emery later telling them to “sort it out”.

But Sport reports that “Neymar has already communicated to [PSG CEO] Nasser Al-Khelaifi that his co-existence with Cavani is totally impossible.”

It follows a cover story in French daily L’Equipe on Tuesday which said Cavani and Neymar almost came to blows in the dressing room and had to be separated by teammates.

Now it remains to be seen if Neymar’s €222 million price tag comes with a stipulation that PSG accede to his wishes.

Is an end to the saga of Diego Costa‘s long-mooted move back to Atletico Madrid finally in sight?

Marca reports that there soon will be an answer either way, saying Atleti have tabled a “final offer” of £57 million plus add-ons for the Chelsea striker.

It says there had even “been hope that the forward would have been present at the opening of the new Wanda Metropolitano stadium on Saturday, when an announcement could have been made.”

Costa has been absent from Chelsea since the start of the season and has made it clear that returning to Atleti is his only aim.

But Marca says no agreement for a January move has yet been reached, “with the London club playing hardball in response to the striker’s behaviour.”

It stresses that Atleti “are desperate to re-sign Costa and are making an offer that would represent far and away the club’s biggest-ever transfer market operation.”

It’s new contracts all around for Manchester City stars at the moment, it seems.

After reports at the weekend that Kevin De Bruyne will be offered new terms in order to discourage any potential suitors, the Mail says striker Gabriel Jesus is another in-form player in line for a beefed-up deal.

It says City officials have begun negotiations with the Brazil international’s representatives “and want to reward him for his impact since arriving from Palmeiras for £27 million in January.”

Both Barcelona and Real Madrid had been interested in signing Gabriel then, and though his current contract runs until 2021, City “want to acknowledge the improvement he has made” and limit the chance of any mega-money bids.

If all that isn’t enough, the Telegraph reports that David Silva is in talks to extend his City deal until June 2020.

Meanwhile, the Sun says City could soon be in competition with neighbours Manchester United for Lazio midfielder Sergej Milinkovic-Savic.

It says the player’s agent, former Chelsea striker Mateja Kezman, has claimed both Manchester sides are interested but added that he thinks it is unlikely his client would leave in the winter.

— Udinese midfielder Jakub Jankto is a man in demand, with talkSPORT, citing reports in Italy, saying that Arsenal and Everton are among the interested parties.

Jankto, 21, has impressed since breaking into the Udinese first team, scoring seven goals in 35 matches to attract the interest of the Premier League duo along with Serie A champions Juventus and AC Milan.

— Robert Snodgrass is uncertain whether he will play again for West Ham, who signed him only in January, the Birmingham Mail reports.

Former Hull and Norwich winger Snodgrass, on loan at Aston Villa for the season, could earn a permanent move to Villa Park if his temporary switch proves a success.