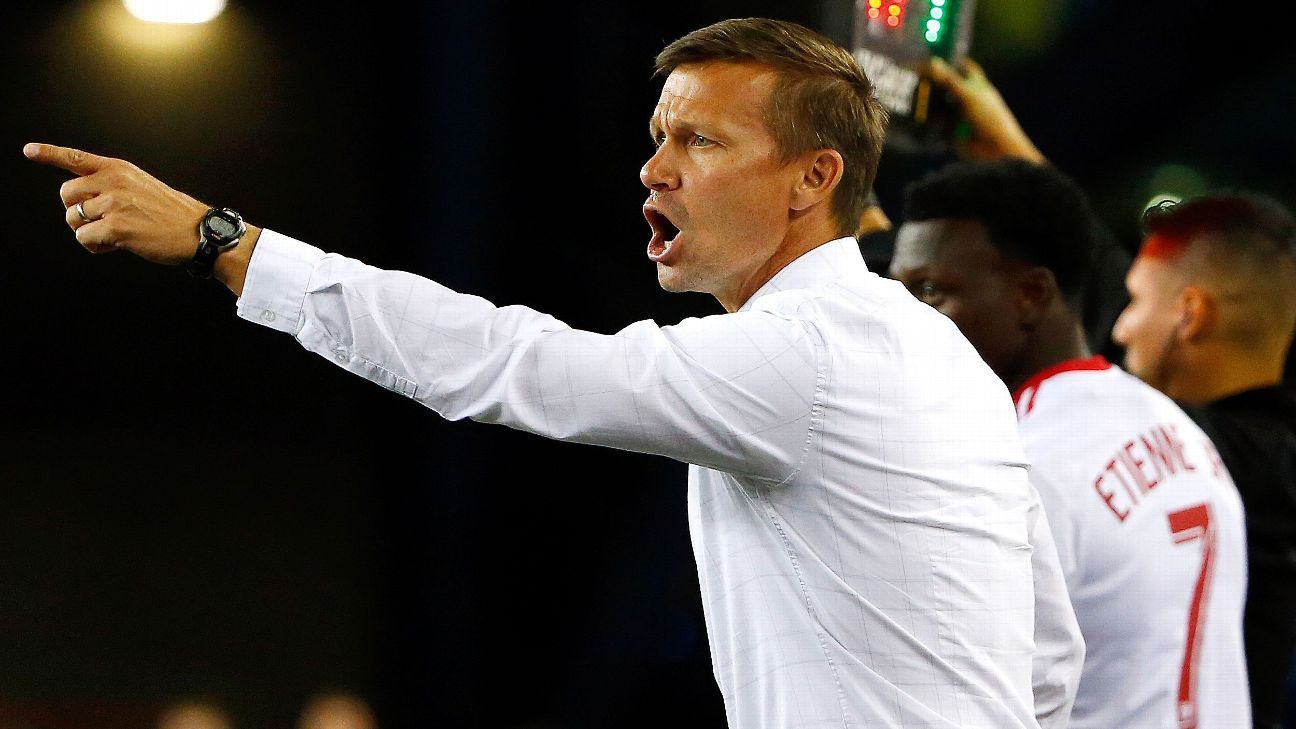 
While pragmatism is the default setting for in Major League Soccer, Jesse Marsch, coach of the New York Red Bulls, has been wedded to his singular philosophy through thick and thin. Marsch describes it as “transition football times 100.”

Broken down into layman’s terms, his system involves a high and dedicated press, red-and-white shirts in opposition faces even when — especially when — the other side has the ball deep inside its own half.

Deployed with the requisite focus and intensity, the style creates turnovers near the opposing goal and creates countless opportunities to break. Results ebb and flow over the course of the eight-month MLS regular season. Players (even club icons, as we shall see) come and go. But for true believers like Marsch, staying dedicated to the cause will bear fruit in the long run.

That’s why, even at the lowest moments of what has been a tumultuous 2017 in Harrison, New Jersey, Marsch says he has never wavered from his big-picture plans.

Whether results back up his vision come October remains to be seen. Because while New York’s 5-1 win over San Jose on Wednesday may suggest the team is finally finding its stride ahead of Saturday’s visit to Minnesota (4 p.m. on ESPN/WatchESPN), the Red Bulls still feel like a team that could go either way.

Marsch is one of the best interviews in MLS precisely because of his willingness to indulge in such high-minded ideals.

“That’s a lot of philosophical mumbo jumbo,” Marsch said at one point in his conversation with ESPN FC, and it’s easy to get swept up in his infectiousness.

The 43-year-old has charted a fascinating career path. A former Princeton Tiger under the stewardship of future U.S. national team coach Bob Bradley, Marsch played in MLS for a decade and a half before landing his first coaching gig in Montreal in 2012. That spell lasted just a single season, and plenty of eyebrows were raised when New York hired him in early 2015.

The Red Bulls have mostly flourished under his leadership. NYRB won the Supporters’ Shield in his first season and returned to the playoffs as the East’s top seed a year ago.

His tenure has also been characterized by upheaval from the beginning. Marsch took over from New York veteran Mike Petke, who was so beloved by fans that his ouster inspired an emotional town hall meeting just weeks before Marsch took over. Thierry Henry retired that same offseason, and the club quickly transitioned from one that was reliant on star power to a thriftier squad driven by the collective.

This past winter brought more turmoil. Ali Curtis stepped down as sporting director in February after much speculation that Marsch was set to move to sister club Red Bull Salzburg in Austria.

Until now, such turbulence has been brushed aside with gestures toward the league standings and a steady string of success. When the Red Bulls stumbled through the early part of their campaign, though, from the outside, at least, concerns about the direction of the franchise surfaced.

Asked whether he ever questioned himself or his style, though, Marsch emphatically answered with a straight “No.”

To some degree, his philosophy requires a regular weeding-out process. Red Bulls players past and present have described the level of buy-in required to play such a physically demanding style, and those who can’t or won’t commit have to be culled for the whole thing to work.

It’s possible to break down New York’s early-season struggles to a single flash point: the controversial trade of captain Dax McCarty to Chicago Fire in January.

McCarty is the type of player whose impact is most keenly felt in his absence. The tireless midfielder was key to much of what made the Red Bulls so successful over the past two seasons, and it’s no coincidence that McCarty’s Fire side currently sits in second place in the Supporters’ Shield standings, while New York languishes just a point above the playoff places. Again, though, Marsch explains McCarty’s trade as part of his grand design.

“This is a delicate topic, because I want to be respectful to the relationship that I had with Dax and that he had with the club,” Marsch said. “Have we missed his football in certain instances? Absolutely. … But not just with Dax; the changes we made in the end were not changes we needed to make for the first half of the season to be good. They were changes that we made in pursuit of a championship.”

Marsch describes the move as indicative both of New York’s desire to get younger — a not-outlandish idea, given the talent coming up out of the Red Bulls’ academy — and his ever-present vow to have his team play exactly the way he wants week in and week out.

You have to give the coach credit for the strength of his convictions, even if — especially if — they sometimes clash with fans’ emotions.

Few could have stepped confidently into a role previously held by a club legend, in the wake of the retirement of the biggest star to pull on the team’s jersey, and had the success Marsch has experienced. Few would have been willing to deal a player as central as McCarty, accepting that it might cause some short-term pains in exchange for long-term gains.

The stakes now are as high as they’ve been since he took the job. Marsch stands alone with his ideals. Whether reality bends to his vision come playoff time might be the most intriguing subplot of the Eastern Conference.

Why they aren’t giving up on him yet
I feel unconfident right now
Alisson 5/10 as Liverpool’s 68-game home unbeaten run ends at the hands of Burnley
Real Madrid’s Odegaard close to Arsenal loan deal
How USMNT prospects adapt to life in Europe, and what their clubs do to help