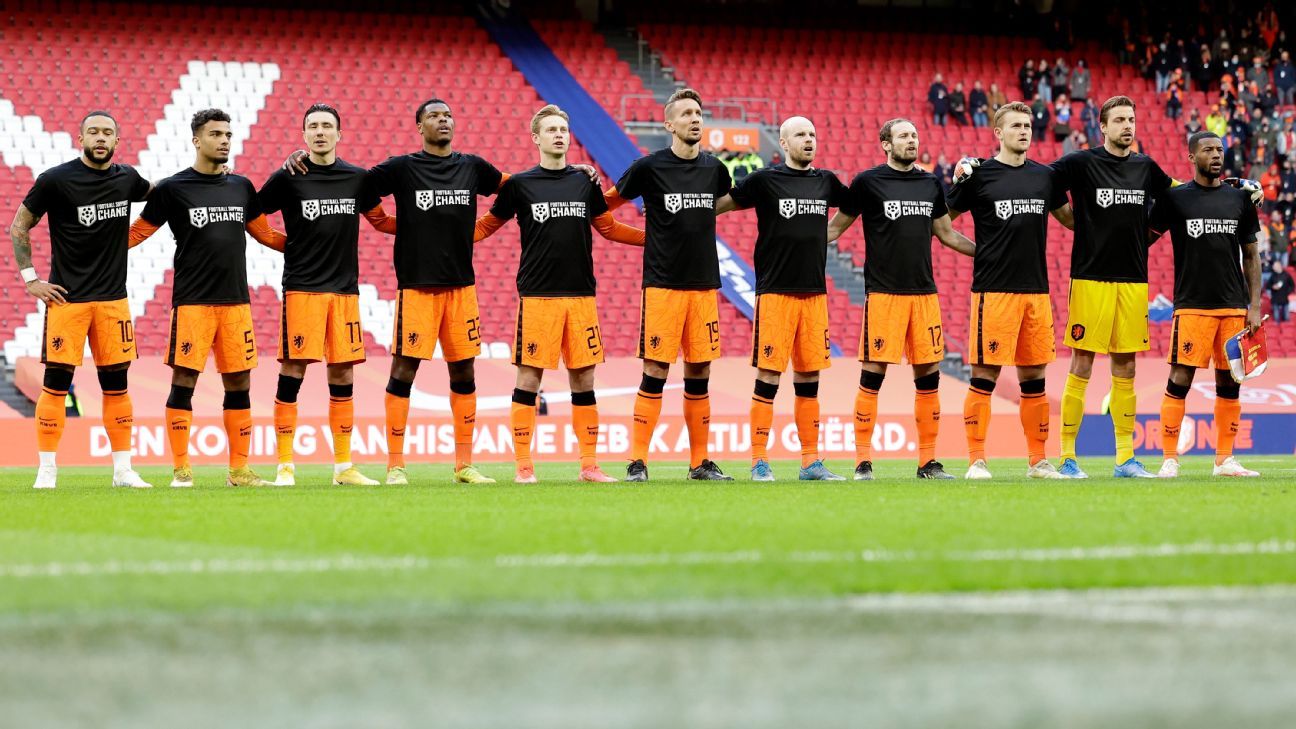 
The Netherlands national team wore T-shirts on Saturday emblazoned with the words “Football supports change,” in an apparent statement about human rights in World Cup host Qatar, ahead of its Group G qualifier against Latvia.

Defender Matthijs de Ligt had said ahead of the match that the Dutch team wanted to make a statement about the human rights situation in Qatar, saying “it’s a very difficult situation with workers’ rights there.”

The Dutch action before the game at the Johan Cruyff Arena followed expressions of support for human rights by Norway and Germany players ahead of their first World Cup qualifying matches on Wednesday and Thursday.

The German team lined up in black shirts, each with one white letter to spell out “HUMAN RIGHTS,” ahead of the 3-0 win against Iceland in Group J. Midfielder Leon Goretzka said the German players had followed Norway’s lead and that they wanted to make a statement about the 2022 World Cup. Norway players wore shirts stating: “HUMAN RIGHTS” and “Respect on and off the pitch” before their game against Gibraltar in Group G on Wednesday.

A March 22 statement by the Qatari government’s communications office read in part: “We have improved health and safety standards for workers, strengthened the capacity of labour inspectors, increased the penalties for companies that violate the law, and worked with labour-sending governments to tackle exploitative recruitment practices before workers arrive in Qatar. Our labour reform programme has addressed issues at all stages of the migration cycle and achieved significant results.”

FIFA’s disciplinary code states players and federations can face disciplinary action in cases of “using a sports event for demonstrations of a non-sporting nature.”

FIFA has not opened a case against Norway or Germany for their actions. The Norwegian national team made a point about human rights again ahead of its game against Turkey in Malaga, Spain. Its players took off jackets for the national anthem to reveal white T-shirts with the message “HUMAN RIGHTS On and off the pitch”, but this time calling on more teams to join forces with them. The shirts also bore the names of Norway and Germany with ticks beside them and the question “Next?”

The Associated Press contributed to this report.

Man United supporters’ protest against owners, the Glazer family, in pictures
Chicharito, Vanney have LA Galaxy back on track after dismal 2020 season, with LAFC coming to town
‘He can’t continue at Real Madrid for one second more’
Van der Sar talks up Man United role but no contact about replacing Woodward
PSG, Mbappe seek more Manchester magic but Man City are their toughest test