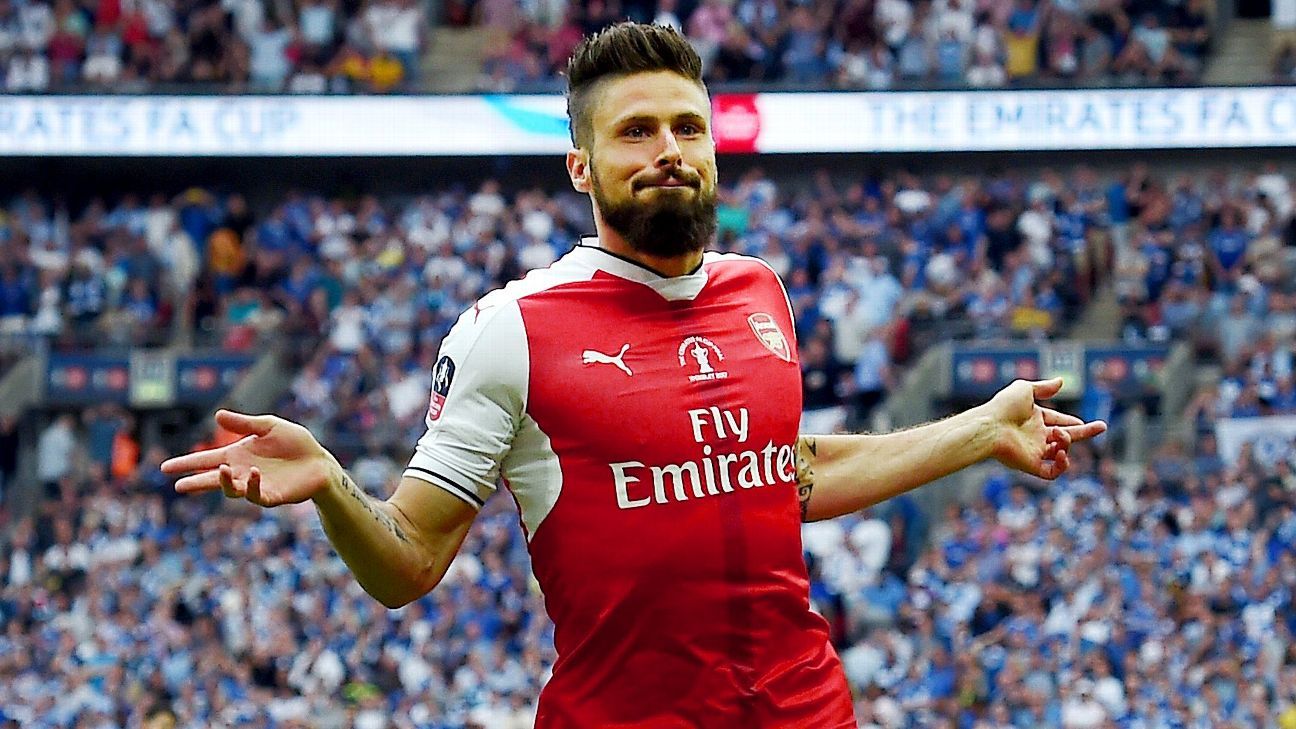 
Eras are not always epitomised by the best players. Arguably, the past few years at Arsenal have not been defined by Alexis Sanchez — he is more the exception than the rule — as much as by Olivier Giroud. If the contrasting figures both exit the Emirates Stadium this summer, it will be with differing senses: The Chilean could not realise his ambitions at Arsenal, while the Frenchman could not quite enable Arsenal to realise theirs.

And yet, should Giroud be sold for a mooted price of around £20 million, he might seem a definitive Stan Kroenke player. Arsenal will have doubled their money on a £9.6m buy, and the striker will have delivered value for money, if not the trophies fans covet, and goals in sufficient quantities to prevent more costly forms of regression.

Perhaps London, in the form of West Ham, is calling Giroud; perhaps Lyon is not, judging by president Jean-Michel Aulas’ comment that “we don’t want to stockpile forwards,” even if that could change should Alexandre Lacazette leave, maybe to Arsenal. It would be understandable if Arsene Wenger wants to keep one who proved an excellent squad player last season, yet the eventual verdict might be that he was not quite good enough to be a long-term first choice.

Signed as Robin van Persie was sold in 2012, Giroud proved a respectable replacement — not in the Dutchman’s class but better than his detractors would suggest. He kept Arsenal in the top five and, for four seasons, in the top four.

His Gunners career has spanned the end of austerity, the start of spending and the accumulation of FA Cups, but 2015-16 represented the great chance to win the title, and it was in the second half of that season, as Arsenal relapsed and Leicester advanced, that Giroud went almost four months without a league goal. His longest drought came at the worst time. It is a reason Arsenal seem forever unfulfilled.

It explains why, though Sanchez and Mesut Ozil were intended to be the flagship players, in his own way, Giroud has been an emblematic figure, sometimes excellent, sometimes frustrating, not quite of the calibre of some of his counterparts at Arsenal’s bigger-spending rivals and often divisive among fans. Much like many a latter-period Wenger signing, he did not bring youth.

Nor, highlighting a shift in the style of play, was he as mobile as most of his predecessors in the Arsenal attack. He has been benched in their past two FA Cup finals so the quicker Theo Walcott and Danny Welbeck could start instead. He was a perennial talking point, veering from pivotal performer to substitute in a way that underlined the doubts that invariably remained about him.

He was the victim of Sanchez’s conversion to the centre-forward’s role but long the beneficiary of Wenger’s inability to sign superior specialist strikers, whether Luis Suarez or Gonzalo Higuain. That might change this summer, and it would be simultaneously cruel and fitting if Giroud departs stuck on 98 Arsenal goals.

He would go as something of a nearly man, almost in elite company, but would look incongruous alongside them because he ranks below the three centurions of the Wenger era, Thierry Henry, Dennis Bergkamp and Van Persie, plus Ian Wright, who scored the majority of his 185 before the Frenchman’s appointment. Beyond that garlanded quartet, he was not as dynamic as Nicolas Anelka, as destructive as Emmanuel Adebayor or as unpredictable as Kanu, despite the scorpion kick against Crystal Palace that ranked among last season’s finest goals. Unlike Sylvain Wiltord, he never scored the goal to win the league.

Perhaps the closest thing to a conventional No. 9 that Wenger has ever fielded might also have been the ninth-best striker of the Frenchman’s reign. Yet if that is damning him with faint praise, Giroud’s statistics indicate why he has confounded some doubters to last for five years at a club of Arsenal’s stature, albeit a dysfunctional one.

Giroud can seem a world apart from the goal-a-game strikers, but he averaged a goal every 100 minutes in last season’s Premier League. Perhaps that was an outlier, facilitated by a role as a super-sub who made occasional starts against lesser sides. Yet it is notable that he averaged one every 151 minutes in 2015-16 and one every 133 in 2014-15. The numbers are consistently impressive.

There is a temptation to dismiss him as a flat-track bully, partly because Arsenal’s record in major matches has been undistinguished for much of his stay and his five Champions League campaigns were each curtailed in the last 16.

Yet once again, that is not quite as simple as it seems. Giroud scored against Manchester United, Paris Saint-Germain and Chelsea last year; Bayern Munich and Liverpool twice each and Manchester City the previous season; and City and Liverpool twice, United and Monaco once in 2014-15. He was capable of excelling on the bigger stage, but much like Arsenal, did not do so quite often enough. Some of those goals salvaged draws — not clinched victories. Some came in Champions League group stages — not the knockout matches.

He has forever taken them to a certain point but never any further. He has been the recent Arsenal: certainly not a failure but not a resounding success, either.