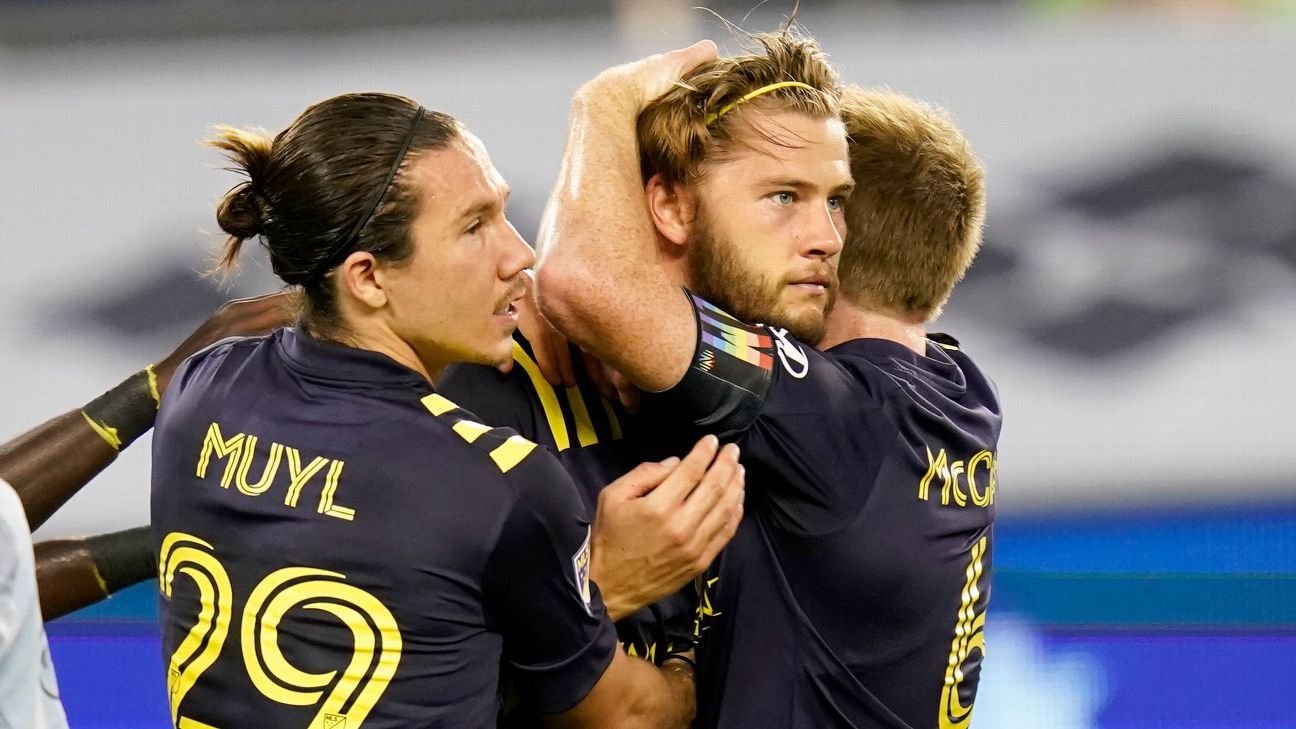 
In the moments after Nashville’s 3-0 win on Friday night against Inter Miami, it was important for the team to acknowledge the historical significance. It had been over 22 years since an expansion team won a Major League Soccer playoff game and even though the play-in win came as part of an expanded field, in a season impacted by the coronavirus, advancing as the No. 7 seed was a significant accomplishment.

“Guys were excited and happy and thrilled,” center-back Walker Zimmerman said. “But amid all that, it was already shifting ahead. The standard shouldn’t be, ‘Let’s be overly excited for winning this game.’ We have higher goals and dreams.”

Those loftier ambitions aren’t without merit. During the regular season, Nashville was one of the league’s best defensive teams. It ranked third in fewest goals allowed (22 in 24 games), tied for the most clean sheets (9), set a record for the fewest goals allowed per game for a first-year club (0.96) and on Wednesday, Zimmerman was named the MLS Defender of the Year.

The defensive success was a result of a plan long in the making and gives Nashville reason to be optimistic ahead of Tuesday’s Eastern Conference playoff game against second-seeded Toronto FC in East Hartford, Conn. (9 p.m., ET, ESPN 2).

More than a year before Nashville SC began its debut season in MLS, general manager Mike Jacobs set about on a roster-building exercise. He gathered head coach Gary Smith, assistant GM Ally Mackay and chief scout Chance Myers and asked them to come up with a Best XI from the league.

“If you can have whoever you want, who would you pick?” Jacobs said.

The group assembled their squads independently and then reconvened, putting their selections on a board for everyone to see. It was already decided that Nashville wanted to prioritize the spine of its team, particularly at center-back, so when they looked at each other’s picks and saw Zimmerman on every single squad, it turned out to be an important moment in club history.

“We had consensus that he was not only the best center-back in MLS, but someone that we felt would be ideal fit for what we were looking for in our team,” Jacobs said. “So, from that point, then it became how can we acquire him?”

LAFC wasn’t keen to give up Zimmerman — especially after they had allowed the least amount of goals in MLS in 2019 during its record-breaking run to the Supporters’ Shield — but in February, just two weeks before the season began, Jacobs’ finally made an offer LAFC general manager John Thorrington couldn’t refuse.

Shortly after Thorrington broke the news to Zimmerman, the young defender was on a call with his new GM.

“I tried to make sure that I was sensitive to the fact that Walker had been traded and I wanted to make it really clear to him that he knew how much we valued him,” Jacobs said. “I actually made sure he knew how much we traded for him and that he was the most expensive transfer [for a defender] in league history.”

The deal included $950,000 in general allocation money over two seasons and a 2020 international roster spot with $300,000 in additional GAM triggered by obtainable performance metrics, surpassing the sum Minnesota gave up to acquire Ike Opara from Sporting Kansas City in 2019.

“Obviously, my head was just spinning,” Zimmerman said. “It was 10 minutes after I found out I was getting traded and it felt really similar to how LAFC talked to me when they traded for me. They said very similar things about building a team around you, the attributes they like about you as a player, as a person.”

After being drafted by FC Dallas out of Furman in the first round of the 2013 Super Draft, Zimmerman developed into one of the best defenders in MLS and helped Dallas win the Supporters’ Shield and U.S. Open Cup in 2016. He earned his first cap with the United States senior national team in 2017 and was the runner-up for the league’s defensive player of the year in 2019 as LAFC set the MLS single-season points record.

With a few exceptions, MLS expansion teams have had a tough time even reaching the playoffs — Nashville are one of seven teams ever to do it — and Nashville’s trade to acquire Zimmerman didn’t provide much of an acclimation period. He was traded on a Monday, arrived in Nashville on a Wednesday and was under contract on a house by Saturday. A contract extension came later.

“It’s pretty obvious that we built our team from the back forward and we laid a really solid foundation,” captain Dax McCarty said. “Once we made the trade for Walker, it became up another level from what we already had.

“It’s the intangibles he brings. It’s the way he is in the locker room. He’s a student of the game. He’s a leader. He’s a guy that never wants to lose.

“Even in training, everything is a competition with him and I think that type of attitude is infectious throughout the team.”

Just two weeks after acquiring Zimmerman, Nashville began its first MLS campaign before a raucous crowd of 59,059 people at Nissan Stadium. The MLS new boys fell 2-1 to Atlanta United, but Zimmerman got on the scoresheet with a 28th-minute equalizer. The team played just one more league game, a 1-0 loss to Portland, before the season shut down due to the coronavirus pandemic and when the league restarted with the MLS is Back Tournament in Florida, Nashville was forced to withdraw due to multiple positive cases among their ranks.

Nashville finally returned to action five months later, an 86th-minute goal from David Accam giving Nashville its first MLS win, a 1-0 victory over Dallas. The clean sheet set the tone for the type of team Nashville would be the rest of the way: organized, stingy and tough to play against.

The team benefited from continuity at the back all season. Zimmerman, his center-back partner Dave Romney, who the team acquired from the LA Galaxy, left-back Daniel Lovitz, a pickup from Montreal, and former Houston goalkeeper Joe Willis all played over 1,800 minutes during the regular season.

Zimmerman said the team’s structure reminded him of his time in Dallas.

“In a 4-2-3-1 [formation], a little bit more defensive,” Zimmerman said. “We’re not going to typically have the majority of possession, though it’s not that skewed. We’re not a team that’s going to move you around with the ball and dictate the game that way. I would say we like to pick out moments to press, win it higher up the field and create opportunities there and obviously thrive on set pieces.”

For Zimmerman, it’s a formula that got the most out of his game and he’s hopeful his performance will lead to continued inclusion with the national team. The 27-year-old appeared in seven of 18 matches for the U.S in 2019, but with a busy 2021 calendar which includes both World Cup qualifying and the CONCACAF Nations League, he should get more opportunities.

“Next year is huge. It’s a massive, massive year for us,” Zimmerman said. “It will be the biggest year for me with the national team. Obviously, it’s extremely important coming off [missing the 2018 World Cup] to go out there and qualify. We have so many new guys in the pool and it’s a really exciting group to be a part of.

“My goal as an individual is to be a part of the qualification process and go out there and help this country qualify for the World Cup. That’s what you dream of growing up as a kid and now that it’s approaching, everyone’s focus is amped up.”

That Zimmerman represents both club and country is something Jacobs said he expects to pay dividends when it comes to player recruitment in the future, especially for domestic players.

“They say to themselves, ‘I’d like to play with him.’ But it’s kind of a self-fulfilling prophecy,” Jacobs said. “Rather than giving a recruiting pitch or gimmick it becomes very real and genuine. Great players want to play with other players.”

The same goes for winning and if Nashville gets through Toronto and reaches the Eastern Conference semifinals, the club’s status as one of the best first-year clubs in league history will be even further solidified.