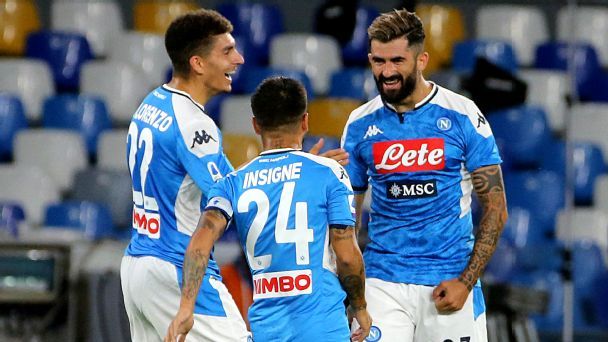 
Hapless Sassuolo had four goals disallowed for offside, three of them following VAR reviews, in an unlucky 2-0 defeat by Napoli in Serie A on Saturday.

Elseid Hysaj put Napoli ahead in the eighth minute, the Albanian’s first goal for the club on his 193rd appearance, with a low shot from the edge of the penalty area.

Filip Djuricic had the ball in the net for Sassuolo in the 32nd minute but the linesman flagged and it was immediately disallowed for offside.

Four minutes later, Djuricic again thought he had scored when he fired in the rebound after Hamed Junior Traore‘s shot was saved by David Ospina. But, after a long VAR review and with Napoli waiting to kick off, the goal was disallowed for offside against Traore.

Francesco Caputo had a goal chalked off two minutes after the restart, then it was Domenico Berardi‘s turn when his effort was ruled out for offside against Caputo who had played the ball to him.

In both cases, Napoli were waiting to restart when the goal was disallowed.

Matteo Politano hit the post late on for Napoli and Allan rubbed more salt into Sassuolo’s wounds when he swept home the second from the edge of the area in stoppage time.

Sassuolo coach Roberto De Zerbi did not comment directly on the disallowed goals. “We did well with and without the ball, but we needed more conviction to come away with the three points,” he said.

“We created nine chances and we should have been two or three up by halftime, so I can’t be happy,” Gattuso said.

“Considering what we create, we score too little and concede too many. It’s not true that it was a 50-50 game, I saw another game from the bench.

“Offside is part of the game and you can’t compare our goal chances with Sassuolo’s.”

Napoli, who have qualified for the Europa League as Coppa Italia winners, stayed seventh with 59 points with Sassuolo eighth on 48.