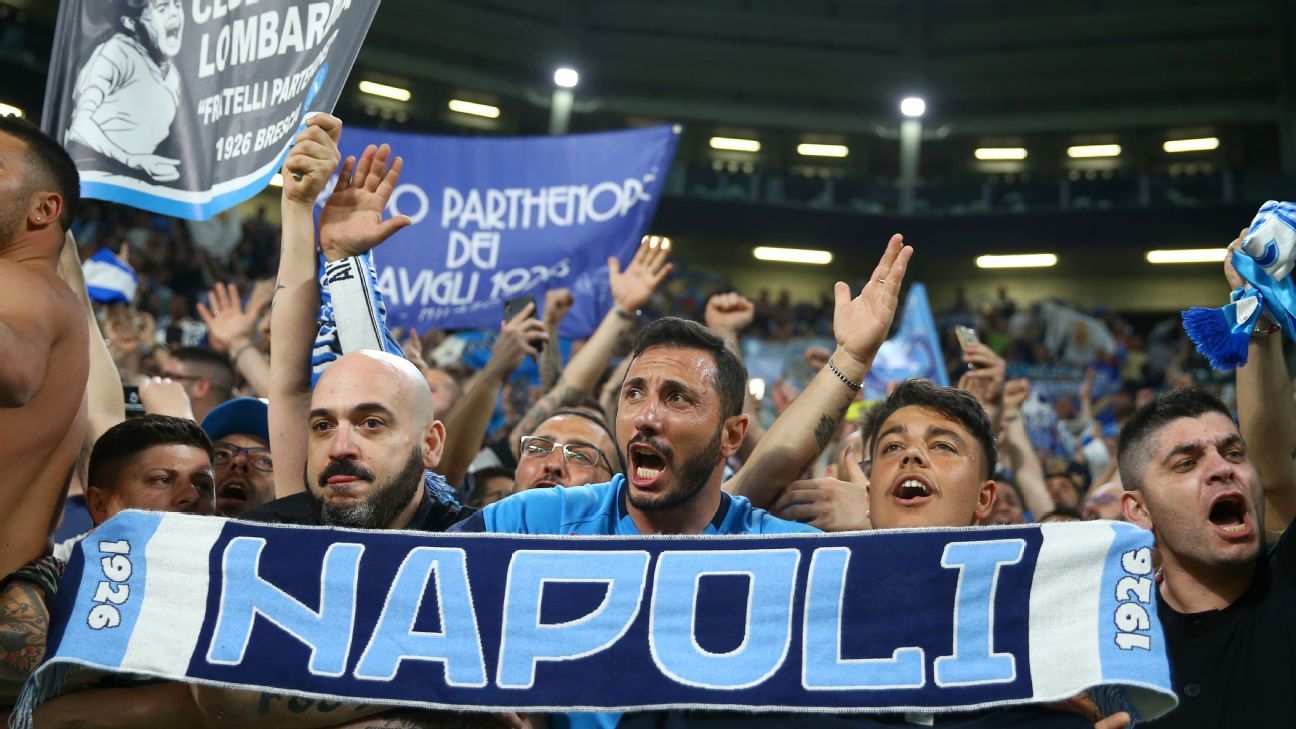 
Amerigo is a Fiorentina fan. Always has been. Always will. Aged 90, he isn’t about to change now, but Sunday’s game at the Artemio Franchi leaves him conflicted. Napoli are in town and his son has always been a big supporter of theirs.

Maurizio was born in Naples while Amerigo worked at the Bagnoli ironworks. The family weren’t there long: better opportunities came up in Amerigo’s native Tuscany and they moved back, but it was long enough for Maurizio to declare himself Napoli forever. “He used to attach this big blue flag to the boot of my car,” recalled Amerigo in La Nazione this week.

Everyone else at school were dyed in the wool Fiorentini. Some consolation was found in Maurizio making them his second team. After all, it was hard for him not to develop a sympathy for them. His grandmother’s house was just a stone’s throw away from the Franchi, on the other side of the railway tracks in Piazza Leon Battista Alberti. He used to go and watch them a lot, never missing a Napoli game when they came to play the Viola. Maurizio’s wife is like Amerigo: A fellow Tuscan, it was hard for her not to support Fiorentina and the same goes for their son, Nicole.

This weekend, though, one imagines they will make an exception.

“My heart still tells me Fiorentina,” said Amerigo. But it’s a funny old life. The boy who used to make him ride around Tuscany with a Napoli flag flying from his car is now their manager and has got them within striking distance of winning the Scudetto for the first time since 1990. “It’s a big game,” acknowledged Amerigo. “Speriamo bene” — “Let’s hope for the best.”

Naples hasn’t stopped shaking since Kalidou Koulibaly’s towering, stoppage-time winner against Juventus last weekend. The Senegal international’s header not only moved Napoli within a point of the Bianconeri with four games to play; it literally moved the earth. Seismographs used to monitor the activity of Mount Vesuvius zig and zagged wildly in the moments after the goal went in as an entire city jumped up and down.

Napoli fans turned out in their thousands to give the team a hero’s welcome on their return to Capodichino airport in the early hours of Monday morning. If Sarri had not been their manager, he probably would have been among the fans. It was as if Napoli had won the title; just imagine the scenes if they actually do.

On Sunday, Sarri was asked how he planned to isolate the players from the euphoria that had been provoked by the win against Juventus. “By making life as normal as possible at Castel Volturno,” he said. “Some of the sessions might be tougher. I might give my players a few more telling-offs than usual. We need the atmosphere to be the same as always. But it’s not easy to achieve balance in this city.”

Hundreds of fans decided to spend Wednesday’s bank holiday at the gates of Napoli’s training ground rather than at the beach. Their passion washed over the players’ cars as they inched through a sea of encouragement on their way home.

In Turin, the situation was a little different. If Naples didn’t sleep on Sunday night, neither did Massimiliano Allegri. “I slept little,” he confessed.

The past few days have been tumultuous for the “Old Lady.” Juventus’ stock price fell after Sunday’s defeat in what for many was the Partita dell’Anno in Serie A, the Game of the Year. One Juventus fan, interviewed upon leaving the Allianz Stadium by Gazzetta dello Sport, called it “a total disaster. The result and performance were as bad as each other.”

The pessimism among supporters and the local press pack is exasperating to Allegri. You might recall it led him to suggest they go and see a doctor after the 2-2 draw with Spurs in February. The depression shocked him. A fortnight later, Juventus progressed in that tie and would come within seconds of knocking out Real Madrid in the next round. Everyone perked up again, but the past week has changed all that. The fanbase is down in the dumps again.

Despite the extraordinary numbers Napoli are making Juventus put up this season, the team and the manager are looked upon as ordinary. Remarkably, a poll run by Tuttosport on Wednesday found that 53 percent of respondents want Allegri sacked. How many of them were Torino fans, or supporters other clubs wishing he were gone, is unclear.

The mood is definitely curious. On the one hand, there is a sense of entitlement. Juventus have won the league six years running. Not winning it would feel strange, even though Allegri has been constantly making the case that what the team has achieved since 2011 is abnormal. On the other, you have a measure of hypocrisy. All of sudden a trophy that some fans had started taking for granted apparently matters again.

The trepidation in the air captures how delicate a moment this is for Juventus. Hundreds of Juve ultras also happened to spend the bank holiday outside their team’s training ground but it was reported as a protest — the first in years at Juventus. Chants called for the players to show what they are made of and a number of them had to get out of their cars to hear the ultras out.

La Repubblica claims Buffon was chided for going over to Napoli’s away support to applaud them at the end of Sunday’s game, the gesture of a good sportsman. Dybala, meanwhile, was told in no uncertain terms: “We want the Scudetto.” Sheepishly, he said: “We want it too.”

It’s amazing when you think about it. This team is top of the table, masters of their own destiny. A point better off than a year ago. They’re on course for another double. And yet judging by the tension around the team, it’s as if Juventus are back where they were before the appointment of Allegri’s predecessor, Antonio Conte: sitting in seventh place instead of poised to win a seventh straight league title.

Nevertheless, Saturday’s game against Inter is massive, not only because of the rivalry the Derby d’Italia is famous for but because if Juventus slip up, Napoli can overtake them. Juventus lost this fixture at San Siro last season and Inter have got a lot better in the meantime. Along with Napoli, they’re the most improved team in the league and crucially remain undefeated against the top nine in Serie A.

One imagines Mauro Icardi will also fancy his chances of breaching that Juventus defence, particularly with Giorgio Chiellini ruled out for what remains of the season. It’s a stress test of the highest order for Juve, especially with Inter chasing Champions League football.

Fiorentina won’t be a pushover for Napoli either. The Viola still have a shot of qualifying for the Europa League and held Napoli to a frustrating stalemate in December. Sarri has never won in Florence since taking over Napoli, but now seems as good a time as ever.

Fiorentina have lost their last two games and have a midfield depleted by suspensions and injuries but pay heed to history: the almanacs warn Napoli not to take the Viola lightly. Those of a certain vintage may recall Napoli being a point off the top on the penultimate day of the season when they came to the Franchi in 1988. Disappointingly, the Partenopei lost 3-2 and had to say arriverderci to the title.

A repeat of that would not go down well in the Sarri household, even among the Fiorentina supporters. But it shouldn’t be ruled out. Not this season, one that’s witnessed more twists and turns in the title race than on the Stelvio pass.