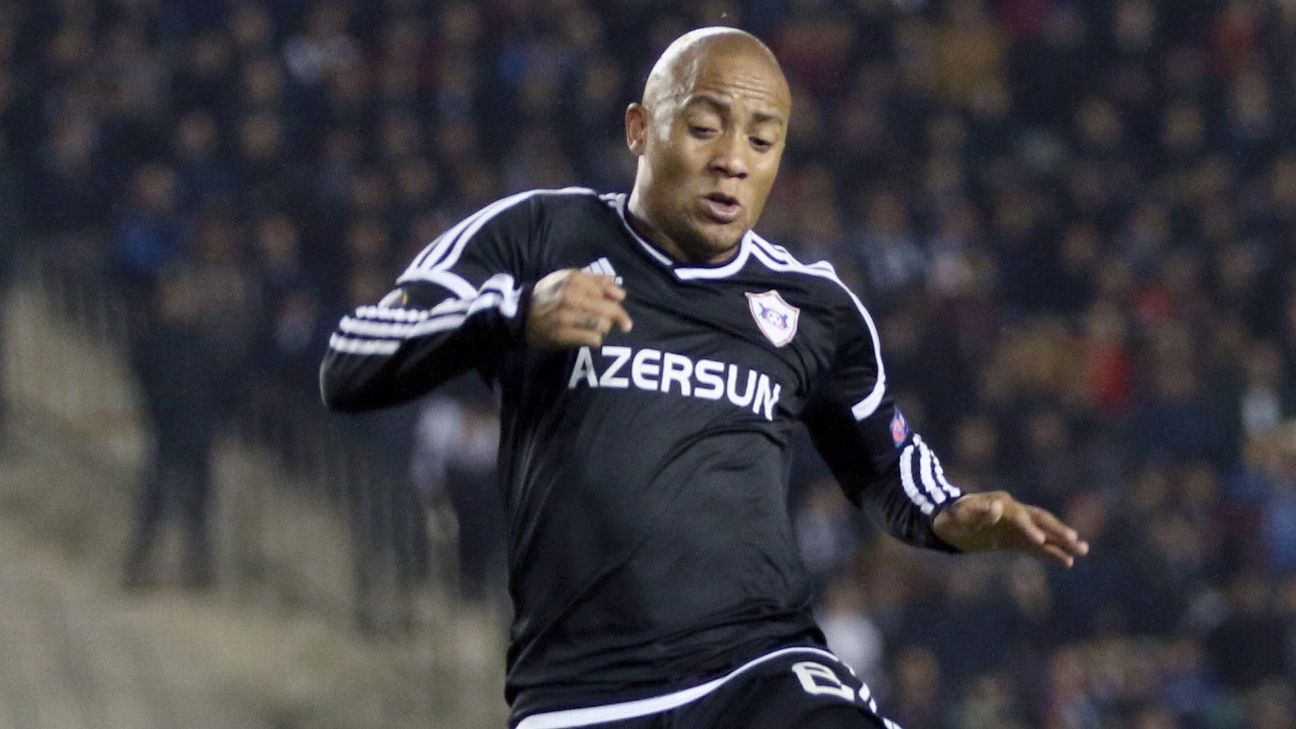 Ndlovu has been the subject of some ridicule in his homeland after failing to deliver in the local league, and then making a startling admission to newspaper Laduma that he lacked the motivation to compete in the Premier Soccer League (PSL).

But in Europe in the past few seasons, and Israel before that, he has been a sensation, helping his teams to trophies on the back of goal-scoring prowess.

It is some wonder that for a country that battles to produce goal scorers, he has just four international caps, and none since a 5-0 friendly mauling against Brazil in March 2014.

He has been called up since, but not picked to play, and it is clear that his all-round talents have not been appreciated by a succession of Bafana Bafana coaches.

But his 38 goals in 61 starts in the last two-and-a-bit seasons at Cypriot side Anorthosis Famagusta and Azerbaijani outfit Qarabag tell a story of an effective striker, and that’s not including the assists that he has provided.

Add to that, the 25 goals in 58 starts he netted in Israel for Bnei Yehuda and Maccabi Haifa, he has been a tremendous export for South Africa.

But he has often been criticised by South African fans for scoring goals in ‘Mickey Mouse Leagues’, despite these same supporters having never watched a game in Israel, Cyprus, or Azerbaijan before.

Even his exploits in the UEFA Champions League this season, and the Europa League last year, have not really swayed opinion.

He has scored away goals against Italian Serie A side Fiorentina, Romanian champions Sheriff, and top Danish outfit FC Copenhagen, the latter proving crucial in getting Qarabag into the group stages of the Champions League.

Certainly, he has been a favourite wherever he has played, especially initially, though he did have an ignominious exit from Maccabi Haifa, where he was hounded out by fans in what he claims were racially-motivated attacks. At Anorthosis Famagusta he made it clear he wanted to leave the club after one successful season and forced his own exit.

But back in South Africa, despite what he has achieved abroad at a time when the country has so few who excel in Europe, he remains a figure of some ridicule, perhaps unfairly so.

He came through the development structures at Platinum Stars but did not play a game for them, before moving on to Mamelodi Sundowns for the 2009/10 season.

He went to the 2009 FIFA Under-20 World Cup with South Africa that season but still had to wait longer for his PSL debut. That came when he spent the next campaign on loan at Bloemfontein Celtic, but did not manage a single goal in nine appearances.

Despite this, he won a move to Bnei Yehuda in Israel and excelled there, before his troubles at Maccabi Haifa forced him back to South Africa and a loan spell at SuperSport United in January 2014.

He stayed on loan the next season, but left midway through for a temporary stint with Mpumalanga Black Aces, neither of which resulted in goals.

In total, he managed just five goals in 31 starts through his five PSL clubs before leaving for Cyprus in 2015.

Ndlovu made a frank admission in 2015 that he did not put is all into being successful for his PSL clubs, but the thrill of Europe was something that inspired and motivated him. It did not endear him to fans.

“Whether I was playing or not, it didn’t bother me because after training I could just go to my family,” he told Laduma’s print edition.

“I mean, my girlfriend and kid are home. The most important people were always there around me. If I was injured, it gave me more time to spend with them instead of me looking for ways to improve.

“I really didn’t care that much. Let’s say, I never gave my all because, if I played well, I would care for the next two/three days and work hard. But if things didn’t go my way, then I just didn’t care.”

It was an amazing admission, and foolhardy too, because there is much to admire about his game.

He is fairly quick, strong, and good in the air. He has a decent first touch and is a good finisher. He certainly puts effort into his game and has always been a willing foil for teammates, making runs to stretch defences when he knows he will not receive the ball.

And he plays with a confidence that, at times, makes him look better than he really is. Is Ndlovu a player who will ever feature in one of Europe’s top five leagues? At 27, you would think ‘probably not’.

But he has a chance to put himself in the shop window when he faces up against Chelsea, who boast one of the best defences in Europe, on Tuesday.

These are the games that South African players dream about when they move to Europe – to face one of the world’s elite clubs on the big stage.

Maybe, finally, he will put in the kind of performance that will finally swing public opinion in South Africa in his favour.