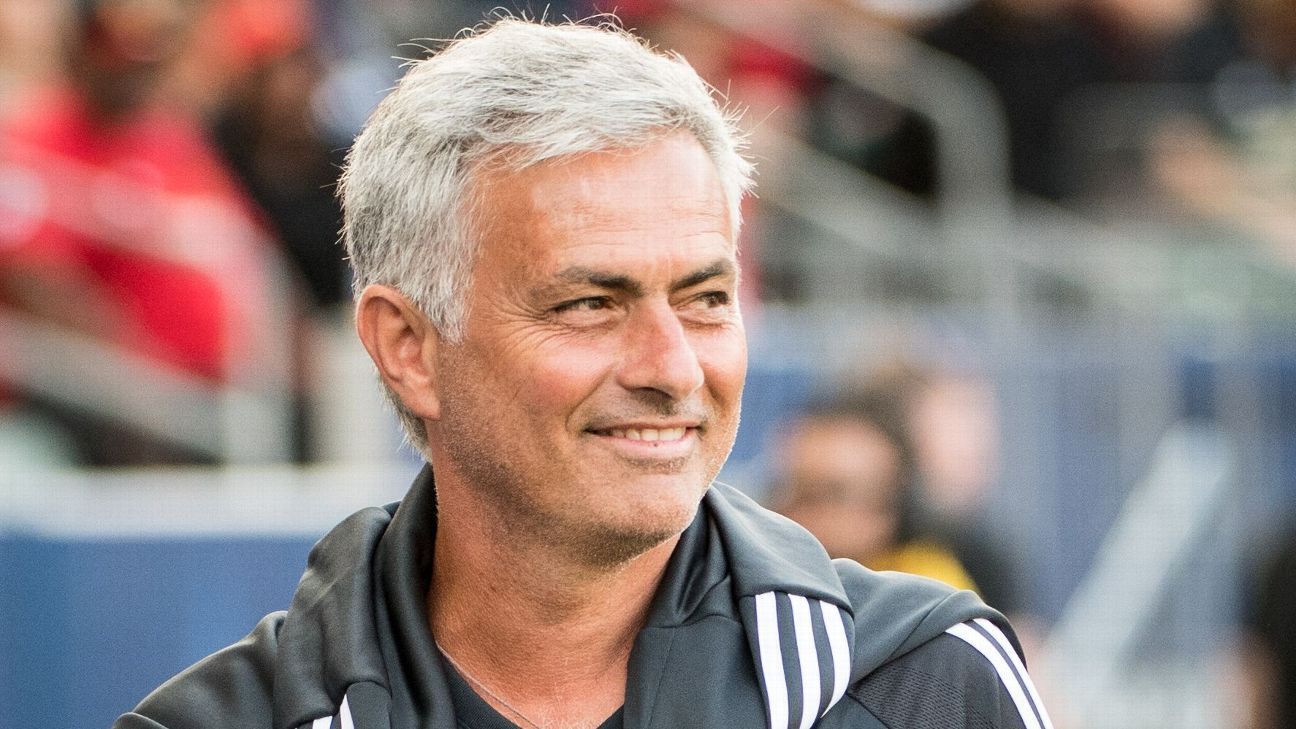 
Jose Mourinho was adamant before and after Manchester United’s first game of the summer, against LA Galaxy, that his switch to a back three was just a trial.

He used it against FC Rostov in the Europa League last season, and matched Chelsea’s 3-4-3 on another occasion.

After watching his team dismantle the MLS side 5-2 on Saturday, he suggested he could use it more often, but that “usually” it would be back four.

It is telling, though, that he didn’t waste any time making the switch. The players started preseason training on Monday but spent two days, Thursday and Friday, working on the new formation.

Logic suggests you work on your primary system first with variations eased in later on. Maybe Mourinho is just keeping his cards close to his chest.

It was a surprise when MUTV revealed ahead of the game at the StubHub Center in Carson that the team would start with three at the back. But it does make sense.

To play 3-5-2 or 3-4-3 regularly you need a lot of centre-backs. And Mourinho, at the moment, has eight. Chris Smalling, Phil Jones and Daley Blind started the first half against Galaxy. Eric Bailly, Axel Tuanzebe and new signing Victor Lindelof came on for the second half.

Timothy Fosu-Mensah can play there, too. So can Marcos Rojo, although he is still recovering from knee ligament surgery.

You also need players capable of playing at wing-back. You can argue Antonio Valencia is already doing a similar job, raiding up and down the right.

Luke Shaw, with his attacking instincts, might be better off as a left wing-back and there is plenty of cover in Jesse Lingard, Ashley Young, Matteo Darmian and Demetri Mitchell.

The system is named after how the defence is organised. But more exciting is how it would allow United to attack.

Mourinho used 3-5-2 in both halves against Galaxy with Juan Mata and Marcus Rashford furthest forward in the first 45 minutes and Anthony Martial and Romelu Lukaku in the second.

But the United boss suggested afterwards that Rashford and Lukaku could play together as a front two. There is a chance he could try it later on the tour of the US.

Lukaku’s physicality and Rashford’s pace would scare most Premier League defences. Putting more strikers on the pitch is an obvious solution to the goalscoring problem that plagued last season.

There are downsides. If Paul Pogba, Ander Herrera and a new holding midfielder are the preferred midfielder three, where do Martial, Mata and Henrikh Mkhitaryan play? Mkhitaryan, in particular, would be a big miss.

United have been here before.

They came to California for the 2014 tour and Louis van Gaal used 3-5-2 in his first game — again against LA Galaxy. The Dutchman had success with it while in charge of Netherlands at the World Cup and started the Premier League season with the same formation.

But he had inherited a squad that had been built to play with four at the back and his players never looked comfortable, winning just one of their first six games in all competitions. It was ditched soon afterwards, although it did reappear from time to time.

During a game at QPR in January that season, the travelling United fans chanted “4-4-2” at Van Gaal after he had reverted to a back three.

In 2014-15, Van Gaal was something of a pioneer in the Premier League but last season the three-man defence became fashionable.

Chelsea won the league after Antonio Conte switched his formation to 3-4-3 in October. Both United and Tottenham beat Chelsea after matching their system. And by the time Arsene Wenger changed the way Arsenal played in April, 17 of the 20 Premier League teams had tried a variation of three at the back at least once.

The Premier League has seen broad tactical trends move from 4-4-2, to five-man midfields and now on to three-man defences. Last season, Chelsea became the first team to win the title playing in that way.

Mourinho has spent than 15 years perfecting the art of an organised 4-4-3. And he insists United will not stray too far from that next season. But as he found out against LA Galaxy on Saturday, he has the players to do something different. Something that worked well in the Premier League last season.

That it would allow United to play both Lukaku and Rashford in their best positions and is an added bonus.