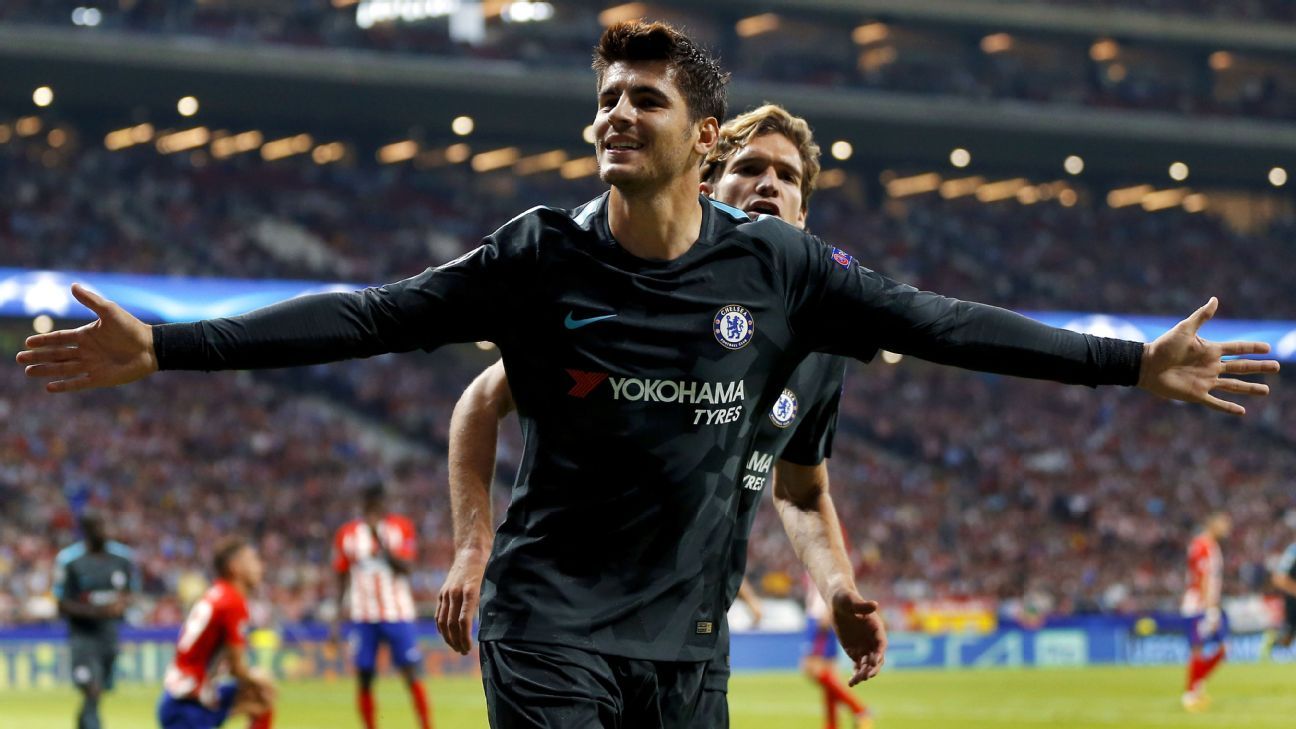 
MADRID — Three quick thoughts from Chelsea’s last-gasp 2-1 win over Atletico Madrid in the Champions League group stage at the Wanda Metropolitano on Wednesday.

Michy Batshuayi scored with the last kick of the game to put Chelsea in control of Group C and end Atletico Madrid’s unbeaten home record against English clubs in the Champions League.

Batshuayi, a late substitute for Alvaro Morata, Chelsea’s other goalscorer, scored from close range three minutes into stoppage time to claim a crucial victory for Antonio Conte’s team ahead of the double-header against AS Roma on matchday 3 and 4.

Having taken the lead against the run of play with a first-half penalty by Antoine Griezmann, Atletico could not continue to ride their luck after the interval, but Batshuayi’s goal was a cruel blow, with Turkish referee Cuneyt Cakir blowing for full-time immediately after the Belgian’s shot had hit the back of the net.

The goal ended Atletico’s proud unbeaten record against English opponents on home turf and it came in the first Champions League contest staged at the club’s new Wanda Metropolitano Stadium following their departure from the Vicente Calderon.

Chelsea dominated, though, and they will go into next month’s Stamford Bridge clash with Roma knowing that a victory will leave them on the brink of qualification for the knockout stages at the halfway stages of the group campaign.

With Atletico, currently winless on one point, facing Qarabag in their next two games, Diego Simeone’s team still have the opportunity to bounce back and emerge from the group.

But Chelsea are now in firm control at the top after this victory, which will also offer a huge morale boost ahead of Saturday’s Premier League clash with Manchester City.

Morata extended his fine start to his Chelsea career with another goal for the club against Atletico, but while that was the headline-making contribution in the Wanda Metropolitano, his link-up play with Eden Hazard was perhaps the most satisfying element of the game for Antonio Conte.

Hazard’s ankle injury lay-off forced the Belgian playmaker to miss the opening weeks of the season and this was only his second start of the campaign. But even before he teed up Morata’s headed goal on the hour mark with a floated cross, Hazard showed that he and the Spain forward can build a formidable partnership at Stamford Bridge.

Morata is the perfect No. 9, leading the front line with pace, power and finesse. He is a much more elegant striker than his predecessor, Diego Costa, and also more willing to bring in his teammates.

After being released for a fifth-minute chance by Hazard, Morata repaid the favour on 13 minutes when the No. 10 struck the post after being teed up by the centre-forward.

The two seem to have struck up an instant rapport, with Hazard knowing when to pass, when to hold, and Morata smart enough to make the runs to enable Hazard to find space.

If Morata is going to operate as a lone striker this season, Hazard will be even more important to the team in his role as a creator just behind the former Real Madrid man.

Against Atletico, Hazard roamed around the pitch, just behind Morata, but he clearly relishes playing with the club’s new centre-forward and the pair have the capabilities to make it a prolific partnership.

Atletico Madrid have done well so far in terms of adjusting to life at the Wanda Metropolitano, with two home wins in La Liga ahead of this clash with Chelsea. But on a Champions League night, when every little edge counts, there was a real sense that Diego Simeone’s missed the unique surroundings of the Vicente Calderon as they slipped to a cruel late defeat.

In recent seasons, Atleti’s crumbling old home became one of the most atmospheric stadiums in Europe, with the backing from the home fans driving the team onto two Champions League finals and a La Liga title. It also witnessed countless performances of Simeone’s team chasing down opponents, denying them time and space in the tight confines of the old stadium.

But the new stadium is different — it has to be — and on this evidence, it will take Atletico time to get used to the ground on big Champions League nights.

The pitch is no longer hemmed in by stands on all four sides, with acres of space between the touchline and seats, and even though it may be an optical illusion, the playing surface appears much bigger, making it more difficult for Atleti to play their high-intensity pressing game.

There were also an unusually high number of stray, over-hit passes by Atletico on a pitch they’re still sizing up.

Chelsea dominated the game for long periods and were unlucky to fall behind to Griezmann’s penalty. They were never pushed back and given the “Atletico treatment” as they may have had at the Calderon, though.

For now, the Metropolitano is nice and shiny and new, but it isn’t yet the fortress that the Calderon became.