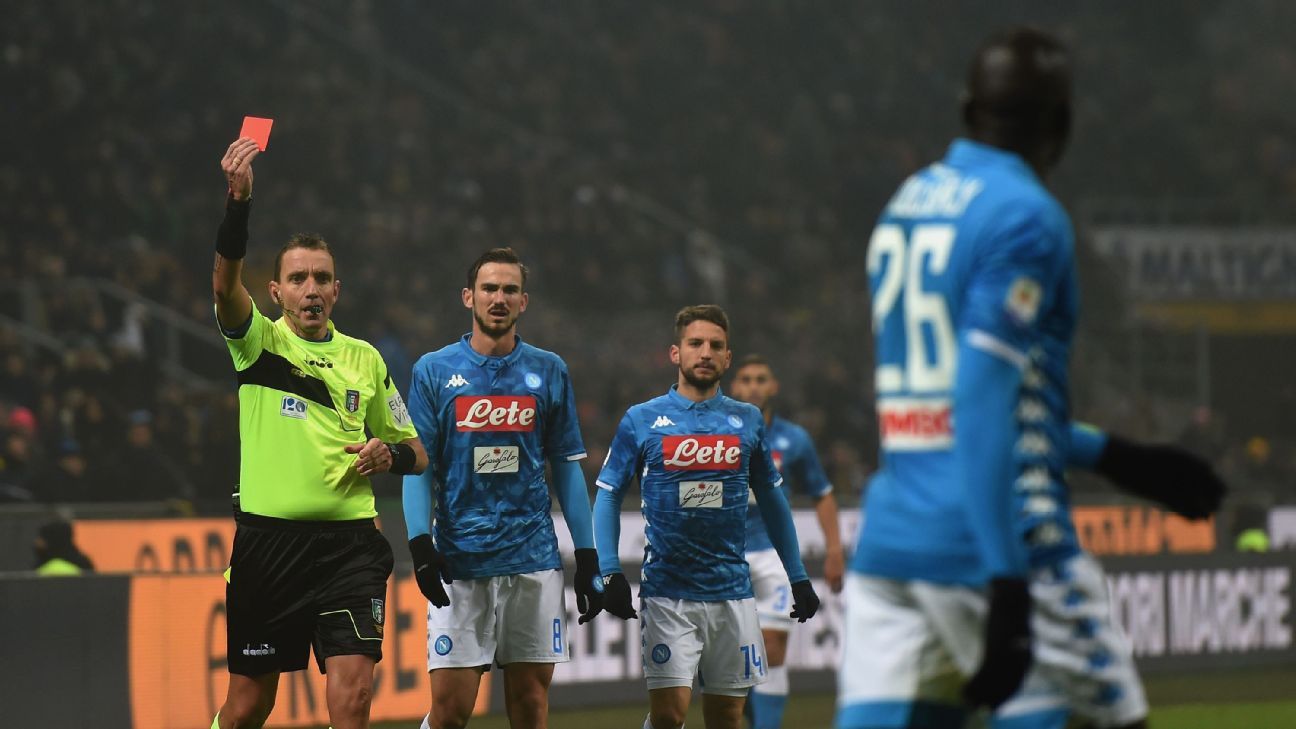 
What was supposed to be a day of celebration on Boxing Day, with games of football played in an atmosphere of goodwill, instead turned into what is locally known as figuraccia: “the worst possible impression.”

Dec. 26 left Serie A bruised and the reputation of the league, not for the first time, under awkward scrutiny. One incident followed another in a chain reaction that caused shock and horror and must give serious pause for thought. The winter break, which will commence after Saturday’s round of fixtures, can’t come soon enough as the environment in which football is played in Italy needs to cool down.

The worst of it came before, during and after Inter’s clash with Napoli at the San Siro. While Inter has since been hit with a two-match stadium closure for what happened, it will take much longer for the memories to fade.

Doubt cast on the integrity of the game and the good faith of referees, deplorable racist chanting in the league’s showpiece game, violence and death all combined in a day to forget. Forgetting, however, would exacerbate the situation because unless days like these are remembered and acted upon, no progress will be made.

The focus this midweek should have been on 35-year-old Fabio Quagliarella scoring for an eighth straight game with another improbable volleyed back-heel, or on teenager Nicolo Zaniolo putting a defender and goalkeeper on his backside before chipping in his first Serie A goal with a style reminiscent of Francesco Totti. Alas, the show was stolen by a simmering tension that boiled over, consuming everything.

It began with Juve’s 2-2 draw at Atalanta early on Boxing Day, in which the Serie A champions were losing before Cristiano Ronaldo’s super-sub appearance and equalizer off the bench. Following the match, Juve coach Massimiliano Allegri spent most of his media duties unable to hide his exasperation at the irresponsibility of some owners and executives throwing suspicion on match officials. Napoli president Aurelio De Laurentiis had highlighted that the referee for Juve’s game, Luca Banti, hailed from Livorno, the same town as Allegri, and complained about the one designated for Napoli’s game against Inter, Pier Silvio Mazzoleni, for the mistakes he made in the Super Cup in 2012.

Allegri couldn’t resist sniping back. “It’s normal that people come to the game, that incidents happen inside and outside the ground, and we then complain and cry about these things happening.  You talk about bringing families and kids back to stadiums and then you say and do this.  We take away their enthusiasm.” Like Allegri, Giorgio Chiellini advised De Laurentiis, without naming him, “to be less of a conspiracy theorist and to think about his own team.”

But the outspoken De Laurentiis was not the only one this week harking back to Calciopoli, the infamous scandal in 2006 whereby Juve and other top Italian clubs were accused of using a phone network to get favourable referees assigned to their respective matches.

While everyone was still digesting the finer points of Allegri’s lament, Sassuolo’s injured midfielder, Alfred Duncan, was tweeting his disgust at what he presumably considered a glitch in Goal-Line Technology ruling out a Patrick Schick own goal that, if given, could have turned the game against Roma back in his side’s favor. (The goal was disallowed with the Giallorossi leading 1-0; they’d go on to beat Sassuolo 3-1.)

“Relax, it’s not a goal,” he wrote. “Let’s just carry on with the shame of ruining football by deciding who has to win a game beforehand.” The post, and screen-grabs of it, went viral before Duncan could delete it. Despite the cold outside, the temperature in Serie A kept rising.

Four Napoli fans were stabbed in an alleged ambush on the way to San Siro. A 35-year-old, reported to be an ultra of Varese, who are twinned with Inter, was run over and later died in a hospital. Three Inter ultras have been arrested. At a news conference on Thursday morning, the police commissioner of Milan, Marcello Cardona, said that the number could increase and announced he will propose that the Curva Nord — the curved area at the north end of the stadium where Inter’s ultras congregate — be shut down for five games along with a ban on Inter ultras travelling to away games for the rest of the season.

Antonella Leardi, whose son was killed on his way to watch Napoli play Fiorentina in the Coppa Italia final in Rome in 2013, said: “Despite me and a very small number of other people working hard on this issue, it doesn’t seem to interest anyone else. There’s little interest, if any at all, on the state’s behalf in protecting people, like my son, who go to games and don’t come back. It leaves me very, very confused and drains me of almost all my strength.”

A bad day deteriorated further when Inter and Napoli finally kicked off. To watch it was to be entrapped rather than to escape the problems afflicting Serie A, as Kalidou Koulibaly was the victim of monkey chanting.

Booked twice in quick succession for a tactical foul and then sarcastic applause in the 81st minute, the Senegal international, who had been Man of the Match up until that point, was defended by his teammates, who surrounded the referee and gestured that the treatment Koulibaly had received is what lay behind his dissenting reaction. Common sense should have been applied rather than letter of the law.

Why the rules regarding racist chanting were not enforced remains a mystery. “We asked the federal agent to suspend the game three times for the chants at Koulibaly,” Ancelotti said after the match. “Announcements were made over the loudspeaker, but the game carried on.” So, what happened to the referee calling both sets of players to the centre circle while another warning is read out for a temporary suspension after the second infraction, and then the next step in a three-phase procedure: walking them back to the dressing room and submitting a request for the abandonment of the game?

“We keep being told play can be halted, but when?” Ancelotti asked. “After four or five announcements? Maybe we have to take matters into our own hands next time and stop play ourselves. They’ll probably make us lose the game if we walk off, but we are prepared to do it.”

As for the referee, if, as has been argued in this case and others, he was so in the zone officiating a high-pressure game that he missed the abuse doled out to Koulibaly, then the question is: Should he not receive help? Might audio be under constant review as well as imagery in the age of the VAR?

Understandably, there will be calls for the Italian Football Federation and Serie A to do more. Closing stands, handing out fines and issuing banning orders will not be considered drastic enough, nor can we measure the effect of the initiatives launched to educate the next generation to be tolerant and say no to racism.

This is not an issue that sport, a broad reflection of society, can solve on its own. The tone and nature of the rhetoric by some people in power, not just in Italy, is emboldening rather than discouraging racism in all forms. The hope is that a ground like the San Siro, which recently held the Champions League final, should have the necessary infrastructure and technology in place to identify, catch and bring charges against the perpetrators. Il Corriere della Sera reports that this process is already underway.

Football is scheduled to return in Italy for one last time in 2018 on Saturday. Attracting Ronaldo was supposed to signal a turning point for Serie A, but more days like Boxing Day will only threaten to serve as a turn-off.